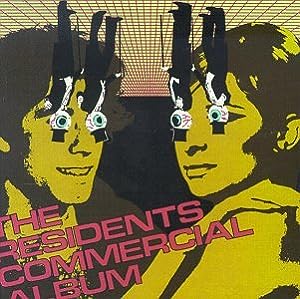 Richard J. Anderson: Don’t bother reading this. Just get The Commercial Album and listen to it. If you’re going to start with The Residents, start here. Right here. With this album. Right now.

Why? What do you mean why?

Well, it’s the gentlest introduction to The Residents out there. Duck Stab is a good place to start too, but there’s a distinct advantage to The Commercial Album in that it’s all one minute long songs.

Why is that an advantage?

Yeah, I know, outright ordering you to listen to a record before I even review it is a bit pushy too. Shut up. God, you’re pushy.

I’m sorry. Just listen. To me. Or the record.

See, the advantage to one minute songs is that if you don’t like one, all you have to do is just wait for about thirty seconds or so, and you’ll have another, completely different song to listen to! You’re going to like something on this album, probably several things, hopefully a couple dozen. There’s really only a handful of cuts I don’t like, and even then it’s just that I like the other ones a lot better.

The Residents suggest that you play each song three times in succession to make them pop song length, but they don’t have to be! Besides, how much of a pain in the ass would that have been in the days of vinyl? Also, it would take two hours, and who has that kind of time?

One minute pop songs, even with The Residents twisted sense of “pop” really are the wave of the future. We all have ADD, and pressed for time. Hell, The Residents even, allegedly, bought forty one minute ad spots on a San Francisco station and played each song that way. You didn’t even have to buy the album.

The Residents on the radio! How wild is that? They even got Andy Partridge and Lene Lovich to sing on this thing! You have to hear it!

I know. Forty tracks is a lot. Yes. They’re short, damn it.

Fine. Here’s a few really good ones: “Easter Woman,” “Japanese Watercolor,” “My Second Wife,” “Act of Being Polite,” “Ups and Downs,” “Moisture,” and “Margaret Freeman.” That’s eight minutes of your life. You can sacrifice that much, right?

This is the crystallization of The Residents signature sound. Everything since has built off the formula established here, and on Duck Stab, more or less. This album is important. Go. Listen. Now.

Don’t make me break out my copy of The Big Bubble. I’ll explain in a few weeks.

Rev. Syung Myung Me: I basically concur with everything Rich says.  The songs on here are some of the most accessible the Residents have done, but not only that, an accurate representation of the band as well.  I follow a blog that posts a lot of really cool music — Doklands, if you’re curious — and while the curator doesn’t like the Residents much at all, this is the one record he does like.  (He’s also said that the thing he hates about it is that when he listens to the album, it spikes his Last.FM account with 40 Residents plays making him appear to like the band.  There are worse problems in life.)

If there is a problem with the album, it’s that some of the cuts can be a LITTLE similar, but, well, you try coming up with 40 perfect one-minute pop songs and see if you don’t crib from yourself now and again.  That said, there aren’t any clunkers or filler tracks.  You’re not going to find, say, a “Punk Love” or a “Zebra” on this one like you are 69 Love Songs (an impressive achievement in its own right, so don’t think I’m slagging off Stephin Merritt).

Aila: The Commercial Album is the first of the Residents albums we’ve been reviewing that I’ve previously heard. It has been a while though, and I didn’t remember most of the individual tracks, but my generally positive recollections of it were essentially reaffirmed.

In some ways this could be considered another ‘concept’ album, although only in so far as this is an album that consists entirely of songs that are about a minute in length. An argument could be made for that being a bit gimmicky, and the songs being too short to really ‘get into’ (and that is true in a few cases), but I actually think this format works extremely well for The Residents. These are essentially jingles, but jingles done in the inimitably bizarre style of The Residents. Which means that there are often strange little musical phrasings and lyrics, and almost always a sinister undertone to the mood evoked by each mini-song. Musically it’s pretty much typical of what’s come before, but probably a bit more restrained due to the format – there isn’t much room for a whole lot of experimentation in a minute. One of the other things I noticed about this album was it features a few different singers than the usual vocalist for the band (whose voice can be a little grating to me sometimes, if I’m honest). The highlights for me are probably the instrumental tracks “Medicine Man” and “In Between Dreams,” along with “Picnic Boy,” “Nice Old Man,” and “The Simple Song.” “The Simple Song” in particular strikes me as probably the best stand-alone track, but The Residents certainly aren’t a ‘singles band,’ and it’s probably best to listen to the whole album. It does take a little getting used to when you actually sit down and listen to this as an album, but it suits the band quite well.

Overall, I think The Commercial Album is probably the most accessible record The Residents released to this point (as the title would suggest). It’s also probably the first really good starting point for a novice (although an argument could also be made for Duck Stab). Is it the best Residents album? Probably not. But it is very good, and probably the closest The Residents get to ‘easy listening.’