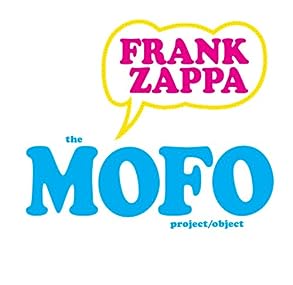 Greasy Love Songs was my introduction to the new series of Frank Zappa Audio Documentary projects (that one on Crusin’ With Ruben & The Jets), and having loved it so much, I’ve gone back for the other two — Lumpy Money and the first one, The MOFO Project/Object, looking at the first Mothers Of Invention album, Freak Out! There’re two versions available — a 2-CD edition available at retail, and a 4-CD version available only through Barfko-Swill, the Frank Zappa online store.  Of course, I went whole-hog and got the 4-disc version.  (As it turns out — c’mon, really? — there are 7 tracks exclusive to the 2-CD edition.  That’s… OK, honestly, that’s kinda bullshit, considering that each of the 4 discs is an hour long — leaving about another hour of space on the four CDs, plenty of space to put those 7 cuts on.)

BUT BUT BUT — wicked lame that may be, which it is, ‘cause, really, if I’m gonna spend the extra money for the deluxe version that’s got an extra 2 CDs’ worth of material in a fancy, puffy plastic package, I figure the least you can do is not make me buy the plain version too — BUT BUT BUT it is worth it, because, man, there’s a lot of great stuff on here.  The first CD is the original vinyl mix of Freak Out!, and the other discs are all rarities.  Disc 2 is mostly alternate takes and the basic tracks of songs (mostly instrumental versions).  Disc 3 is mostly audio of the sessions – what was going on between the songs, and Disc 4 is mostly interviews with Frank Zappa about the making of the album — though discs 3 and 4 have a fair amount of songs each as well.

The “basic tracks” versions of the songs are amazing.  The only “Basic Tracks” one that’s not fully instrumental is “Trouble Every Day”, which is a full minute LONGER than the album version — which is super cool, since that’s one of my favorites from the original album.  The instrumental versions, though, are pretty dang cool too — even the titles that are more traditional pop-sounding like “Anyway The Wind Blows”, “How Could I Be Such A Fool” or “Go Cry On Somebody Else’s Shoulder” are amazing to listen to with the vocals stripped away. These make clear that Zappa’s arrangements were always as dense and complex as songs later in his career; sort of like Make A Jazz Noise Here with mostly instrumental versions of previous titles, except it becomes clear that he probably didn’t actually have to do much in the way of rearranging or adding parts — they were always there, just backgrounded.  Anyone curious about composing or arranging should play the album versions and these versions back to back to see how the master does it.  Disc two also contains one never-released song from the Freak Out! sessions — “Groupie Bang Bang”, which is interesting and kinda catchy, but a pretty straight-forward sounding R&B jam with lyrics that are probably obvious from the title.  It’s cool to hear, but immediately obvious why it wasn’t on the record.  Less obvious is whether or not the song was just improvised at the time, or actually written out.  Either way, seeing as it’s so low-key — it sounds like they knew it wasn’t even a contender for the album if they were even aware Frank was rolling tape, it’s interesting to hear the Mothers just goofing around on a song and their interactions between each other.  They really were a phenomenal rockin’ teenage combo.

Disc three is less essential — it’s interesting to hear the behind-the-scenes stuff, but it’s not exactly open to repeat listening.  Cuts like “Freak Trim”, “Objects” and the various percussion tracks are mostly a work-in-progress look at the fourth side of Freak Out! Some are musical, but others are just fly-on-the-wall stuff in the studio, like the bonus disc of The Beatles’ Let It Be… Naked or the “penalty” tracks on the CD edition of Uncle Meat.  It’s cool to have this stuff, but none of it is likely to make my iPod, particularly as most of these tracks are around 5 or 6 minutes each.  The disc, however, does end with four-and-a-half live songs recorded from the Fillmore in 1966, which is cool to hear the songs a few months after the album was recorded in a version that’s straight-to-tape without any of the tweaking and overdubbing Zappa did on just about every live album.

Disc four opens with six alternate versions and edits of songs before it goes into the interview excerpts (like those found on Greasy Love Songs), along with three more songs in the middle of the record — the remixes from 1987 that were alternate versions from the original album that appeared on the standard CD edition of Freak Out!, leading into more interview.  The first batch include more “basic tracks” (welcomed as always!), along with the single edit of “Trouble Every Day” — which is only slightly over two-and-a-half minutes!  The last cut from the first batch is the exclusive-to-Mothermania edit of “It Can’t Happen Here”, Mothermania being the only official best-of album that Zappa put together from the MGM years.  Of course, this didn’t stop MGM from putting out more best-ofs, but so it goes.

As for the three ‘87 remixes — though they’re not particularly rare, of course, it’s nice to have them here in the set, since of the earlier albums Freak Out! pretty much just had these three songs that were more drastically remixed.  (“Return of the Son of Monster Magnet” was also remixed, but only slightly — and as such, probably wasn’t deemed important enough to include here again.)  And, of course, the interview segments are interesting and enlightening, since Zappa’s always been an eleoquent and insightful speaker.

The only let down with this set is — as I mentioned before — the ripoff of not having those seven cuts from the 2-CD version.  Unless I hear a decent explanation, I’m going to just have to assume this is a lame attempt at a cash-grab to get the hardcore Zappa fans (and, again, is there any other kind?) to buy both versions — meaning these same folks’d be buying yet another copy of Freak Out!.  I suppose it’s lame cash-grab-type things like this are a reason why one type of person who is certainly more unethical than I would say is why God gave us BitTorrent…. but I’d certainly never say that.  Not ever in a million years.