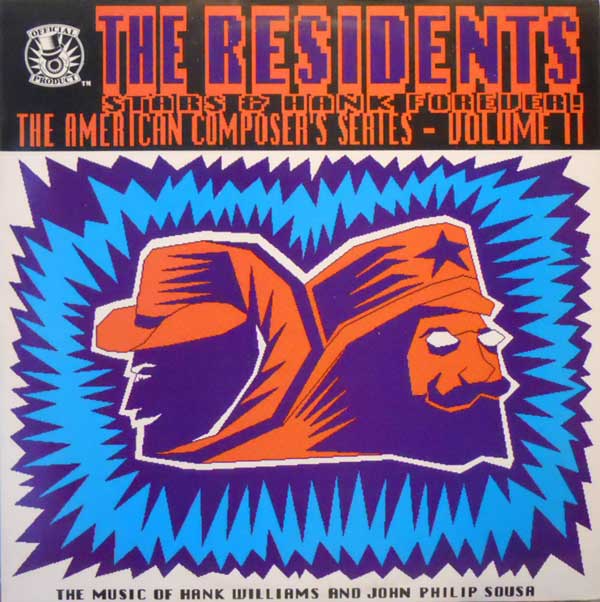 Richard J. Anderson: The second, and final, disc in The Residents’s abortive American Composers Series shows the promise of the concept that the first one failed to deliver on. That doesn’t mean it’s a good album, but half of it ranks up with the best Residents output. That half consists of a selection of the songs of Hank Williams Sr. The flip side, devoted to John Philip Sousa marches, doesn’t fare as well, but it is far better than their attempt at George Gershwin…

The Sousa arrangements are fairly true, but come off sounding extremely mechanical. The Residents were up to their eyeballs, no pun intended, into making computer-based music at this point, and they were still figuring it all out. Get used to it, because its going to define a lot of the Residents sound for a few more albums. That said, “Sousaside” is a minor triumph of studio work and stereo separation. The audio marches from the left to right speaker simulating being there in person as a happy crowd cheers at the spectacle. It ends with the sound of planes flying overhead and the crowd leaving. It’s worth hearing at least once, but probably not much more than that.

The Hank Williams side, however, is worth the price of admission on its own. The covers are delivered with the right amount of gravitas and respect, even if “Kaw-Liga” incorporates the bass line from “Billie Jean.” (The Residents version of “Kaw-Liga” actually ended up being a minor European dance hit, like “Diskomo” before it.) This side also features the last recording the band ever did with long-time collaborator Snakefinger. His guitar warps opening track “Hey Good Lookin’” into something brilliantly sinister. The Singing Resident’s voice gives the tunes an extra dark, melancholy edge that only compliments Hank’s lyrics and arrangements.

So, it’s not a perfect album, but you could do far worse. George and James, comes to mind. Despite its shortcomings, Stars and Hank Forever makes me wish The Residents could have kept The American Composers Series going. They’d worked on tracks for installments with Ray Charles and Sun Ra, both artists who deserve a Residential take on their music. Instead, we’re left with one record side’s worth of amazing music, one side of kinda interesting, and a whole platter of better-off-forgetting. By the way, am I the only person who noticed the errant apostrophe on the album cover’s subtitle?

Rev. Syung Myung Me: I quite like this one.  The Hankside is FAR better, of course, but even the Sousaside is pretty good.  Even the Computer-Generated Cover Art is actually decent! The concept of having it be a parade is clever, and it livens up what’d otherwise be pretty straightforward MIDI-sounding arrangements of John Philip Sousa’s work.  And, honestly, Sousa IS kind of an underrated American composer, so a tip of the hat for thinking of him, Residents.

That praise aside, the Hankside is really where the album shines.  This is the birth of Late-Era Residents, and through the birthing pains of George and James and The Big Bubble, it’s worth it.  (I pity any fans at the time who drifted away from the Residents during those album releases… but I couldn’t blame them, not having the full picture to let them know that it was just a phase.)  “Kaw-Liga” is catchy as hell, but “Jambalaya” is probably the best cut — the Residents take a catchy, upbeat song, and turn it into a gorgeously atmospheric dark cut about a wake.  (The Residents have said the song was originally about a wake anyway — though you can’t really tell from Hank’s version, which makes it sound like a general party.)  “Six More Miles To The Graveyard” is also a cool version, though “Jambalaya” really does take the gold.

The only one I don’t really care for on the Hankside is “Hey Good Lookin’”, but then, that’s one of the few Hank songs I don’t really care for done by him either.  Again, I think that in a lot of circles, Hank Williams was an underrated songwriter and performer — particularly at the time.  There’s been much of a critical re-evaluation of classic country music, but the Residents were at the forefront, showing a bunch of art-rock nerds how brilliant Hank was… and hopefully encouraged a few to go check out the original, too.

It’s sad that this is the last of the American Composers’ Series — I’d love for them to revisit it, but this is a pretty damn good note to go out on.

Aila: Stars and Hank Forever is one of the better Residents records I’ve heard at this point. Which is honestly a bit surprising, since the last time they attempted an album like this (the George Gershwin and James Brown covers album George and James), it was a complete disaster. This time it’s the odd couple of Hank Williams and John Philip Sousa, and it ends up working really well.

The beginning of the album didn’t really knock my socks off, if I’m honest. It starts with “Hey Good Lookin’” done in the typically droll Residents manner. The cheesy synth-based backing part is the only thing that lifts it a bit for me. It does get better quickly. Of the Hank Williams half, the highlights for me are “Kaw-Liga” (the rhythm section of which is built on a sampled loop from Michael Jackson’s “Billie Jean”) and “Ramblin’ Man.” One of the things that makes this a better album than most of the other Residents work of this era is the production. It’s much higher quality, doesn’t sound particularly ‘cheap’ (like George and James), and everything sounds crisp and well-defined, which makes quite a difference. The second half of the album, the instrumental ‘Sousaside,’ is produced in a somewhat more specialized manner. It’s made to sound like a marching band playing outdoors, complete with environmental sounds and crowd noises at times. That might seem like it could be annoying, but it actually works pretty well. It’s hard to choose a particular track that stands out, since this is really a medley, but it’s all fairly absorbing in a unique way. These are of course very recognizable compositions, so it’s all the more interesting to hear them in this, at times, slightly sinister way.

Stars and Hank Forever is everything that it’s similar-concept predecessor George and James wasn’t. It’s a well-produced and well-executed dual-tribute album. Most of this is well worth listening to, whether you’re a Residents fan or not. Even the first half of the album, which heavily features the main Residents vocalist (not my favorite part of the band) was easily stomached and mostly very enjoyable. I doubt it’s one I’ll be listening to on repeat all that often, but it’s definitely one I feel comfortable recommending.