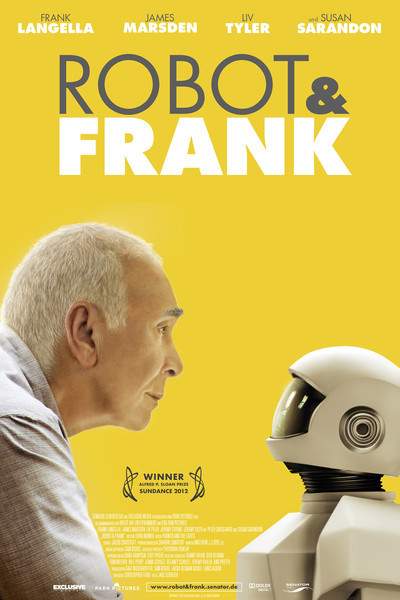 Can a movie about grand theft be heartwarming?  I wouldn’t have thought it, but Jake Schreier’s 2012 film Robot & Frank is.  Frank Langella plays Frank, a retired criminal with a knack for figuring out break-ins — who’s also suffering from a memory disorder.  It’s never revealed by name, but it looks like the early stages of Alzheimer’s.  His son buys him a caretaker robot (voiced by Peter Sarsgaard and physically acted by Rachael Ma) to keep his mind active and help ward off the problems he’s been having.  Frank’s not thrilled with the idea of needing a robot to take care of him, until he determines the robot’s use when it shoplifts a small item for him from the store that replaced his beloved restaurant Harry’s.

The robot’s interested in keeping Frank healthy, physically and mentally, and sees the value in allowing Frank to plot his break-ins — and then realizes that he’s figured out the risks to be low-to-nil, and becomes his accomplice.

Robot & Frank is a little slight; we don’t find out much about Frank’s nemesis Jake other than that he’s a rich, condescending asshole, despite that it kind of sets us up to expect that Jake’s going to be revealed as a fraud, no such revelation comes.  Of course, I’m not sure how important that is.  Likewise, the subplot with his anti-robot daughter ends up being there to provide a little bit of conflict, but ends up resolving itself quickly without any real trouble.  Honestly, though, I’m not really sure if I’d count those against the film.  Not everything in life is an ordeal, and not every enemy turns out to be a crook — many are just jerks.

One other thing I loved about this film is that the music is appropriately futuristic.  The score by Francis and the Lights attempts to predict what “serious” music will sound like in the near future (kind of like Laurie Anderson, but with equal parts industrial and classical influence, if that makes sense) as well as the score which is a bit less avant-garde sounding, but still mixes sterility with warmth — much like the character of Robot itself.

Robot & Frank might not be a weighty film, but that’s not a bad thing.  Sometimes a light film is better than one that’s got a LOT to say.  Perhaps it’s better to just tell a story that doesn’t impose its meaning on people — just catching them up with great characters, and then sneaking in ideas about relationships and technology that viewers can roll around in their heads later, maybe not even realizing what it was that put those ideas there.  Maybe a film can take care of its viewers, while letting them call the shots of what works best for them — giving them the tools while subtly guiding them.  Or maybe it’s just enough to be an enjoyable tale about likable people.  And robots.