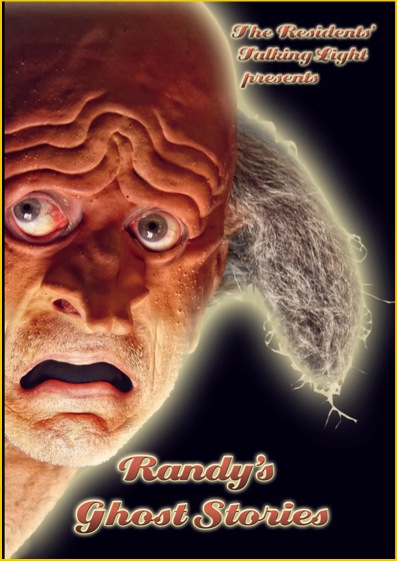 Randy, Chuck and Bob are at it again — the Residents’ most recent DVD release, Randy’s Ghost Stories is another must-have from the Talking Light project.  The Talking Light tour is mostly a greatest-hits type of set with stories interspersed throughout.  The stories are all projected on a set of screens behind the Residents playing a live musical backing — each show has different stories from the main set — usually about three out of the set of eight total stories.  (For example, mine had “Talking Light”, “The Ghost Snake” and “The Unseen Sister” — I think the first and last of these might be at every show.)

Storytelling has always been one of the Residents’ many strong suits — it seems the only time a story-based Residents project falls flat (like The Voice of Midnight), it’s due to delivery — and usually then on the part of the non-Residents called to help with the project.  On this one, a Resident does almost half the stories — and the always excellent Molly Harvey does another story.  The other two actors used also perform pretty well, too — Isabelle Barbier is probably the weakest, but she’s a teenager (I believe she’s also the Bunny Boy’s daughter in Is There Anybody Out There?) and not a professional — not to mention that her character is naive so her youth is a boon.

The theme of Talking Light is, well, death, as it often seems to be with the Residents — but more to the point it’s about how we deal with death through the lens of popular culture.  Some are based on songs (“Perchance to Dream” has the Everly Brothers’ “Dream” running throughout, the titular “Ghost Snake” is named Leonard after Leonard Cohen) and others on commercials (“Florence”, “Milton” and “Pudding In Disguise” all feature samples from advertisements mixed in).  The stories are often a bit disturbing — but then, too, this is a Residents project, and they’ve never shied away from the unpleasant — finding beauty in the repulsive.  Almost all of the narrators are involved in killing someone else — rarely as an actual murder, usually accidental — and are haunted by the ghost of the victim.

“Perchance to Dream” (released in an early version as “Howard” on the Kettles of Fish on the Outskirts of Town box set) is one of the strongest — the sublime Molly Harvey portrays a young widow who can only be with her husband in dreams — and thus decides to go for her goal of sleeping 24 hours a day to be with him.  “The Unseen Sister”, featuring Gerri Lawlor, is very good as well, but perhaps the most squirm-inducing, as it’s about a girl whose mother is scalded to death by boiling water (and Christmas-tree shaped pasta in a detail that makes it all the more vivid) when her imaginary twin sister ties her mother’s shoelaces together.  This one is probably the hardest for me to listen to — there’s just something particularly horrifying in the way the story is relayed.

Some are a little goofy — we eavesdrop on a phonecall to Dr. Phil for the story of “Florence”, a woman whose young lesbian lover feeds her to death (weighing almost a full ton when she dies) interrupted by commercial breaks with ads that conflate food and love (which seems a little obvious, but it’s handled pretty well).  “Pudding in Disguise” is about a man haunted by a serial killer who would wrap his victims in a carpet and stuff their mouths full of Pudding Roll-Ups (a product I thought the Residents had made up — and could have found a more creative name for — until the story ended with the actual ad for the Betty Crocker product and the memories came back from watching those spots on Saturday mornings).  The actor, Adam Faudoa, says the phrase “Pudding Roll-Ups” so many times it begins to lose what little meaning it had, adding to the strangeness of the entire story.  But while these may be odd, they’re ultimately very compelling and speak to the humanity of their subjects — something the Residents have always excelled at.

Even if it weren’t for the bonus features, I’d highly recommend this disc.  There’s an easter egg featuring footage of “Hop A Little” from what looks like the 13th Anniversary Tour, and two short films for an aborted project; “Walking Women” (no relation to “Bach is Dead” from Duck Stab) is an exercise in editing stock footage together and building a story around clips, and “Mutts with Mustaches” is a clip using music from Tweedles that looks like some of the famous Avant-Garde films — Bruce Conner-like montage combined with Brakhage-like experiments of painting on and otherwise manipulating film, all resulting in a feel sort of like some of the 1920s experiments by some of the Dadaists.  (I don’t know how that works considering that Conner and Brakhage came much, much later, but trust me, it does.)

The Residents are often but not always successful with their video work (it seems that for every Icky Flix there’s a Disfigured Night), but Randy’s Ghost Stories, like much of the Talking Light stuff, is a definite win.  It’s also one of the recent Residents releases that’s available in stores rather than through their eBay store, so people can find this great DVD and enjoy it.