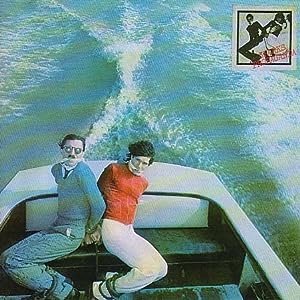 Rev. Syung Myung Me:  If you think of Kimono My House as the first-in-spirit Sparks album, then Propaganda is their sophomore slump record.  It actually did take a little bit of time to grow on me, though.  I loved songs like the title track, “Something For The Girl With Everything” and “At Home, At Work, At Play” pretty much immediately, but for whatever reason the other tracks didn’t grab me for a while.  I’ve finally come around on this album, but of the initial Island Records trilogy of this, Kimono and Indiscreet, it’s still my least favorite.  Which, I suppose is kind of like choosing the least favorite of your children, but hey.

Which, of course, isn’t to say that Propaganda is a bad album by any stretch.  It’s not even a bad Sparks album.  It’s just a bit more of a grower than Kimono or Indiscreet.  (Though from what I’ve read, it was Indiscreet that was the grower on about 99% of the population, so obviously I don’t know what I’m talking about.  That album just kicked my ass the first time I heard it, though.)

Anyway: Propaganda.  If Sparks ever did what was expected, Propaganda follows reasonably well in the steps of Kimono — it’s not a huge leap like they’d often do, swapping genres.  It certainly feels like it follows Kimono more than Kimono followed A Woofer In Tweeter’s Clothing, which I suppose makes sense considering that most of the same band played on both this and its predecessor.

The strange thing for me, though, is again, how initially I didn’t like songs like “B.C.” or “Achoo”, where now I love them.  “B.C.”, if anything, fits along-side either some of the stuff on Indiscreet or their cover of “Do Re Mi” from Woofer.  For whatever reason not all the songs seem super-memorable to me — “Thanks But No Thanks” and “Don’t Leave Me Alone With Her” I like, but don’t stick in the brain like a song like “Bon Voyage” does.  Sometimes (more so with “Don’t Leave Me Alone With Her”), I remember the hook, but not much else about the cut.  The strange thing is — there’s great bits in each, like the “Just keep right on walking” bridge in “Thanks But No Thanks”, but all tolled, they just don’t lodge in my head like most Sparks songs do.  (Likewise “Let’s Go Surfing” from the outstanding Gratuitous Sax & Senseless Violins. I love that album and have listened to it over and over, but strangely, I’ll be damned if I can remember how “Surfing” goes.)  These are both songs, though, that when I do think of them, I tend to think they came earlier, like particularly good tracks from Sparks/Halfnelson or Woofer, despite the much better production on them.

One of the things about this album is it, for me at least, marks the beginning where lyrical repetition really kicks in; one of the hallmarks of Ron’s lyric writing is rhyming something with itself — like in “Never Turn Your Back On Mother Earth”, “I’ll admit I was unfaithful/But from now I’ll be more faithful” or in “Something For the Girl With Everything”, “Don’t try to talk my dear/Your tiny little mouth is full/Here’s a flavor you ain’t tried/You shouldn’t try to talk, your mouth is full”.  It’s a great device — it’s something that sticks in the ear since so much of pop songwriting is based on finding rhymes and, well, ideally overly-clever rhymes — so when Russell sings the same line with a twist, it sticks out.  It defies expectations.  But it’s not out of laziness — it’s craft.  Sort of like the thing about having to know the rules before you can throw them out.  The Maels can write, and have shown their abilities over and over, which is why this technique works; they’re twists on the line — in “Something”, it’s clear that the narrator isn’t listening — the Girl With Everything is obviously protesting about having her mouth constantly stuffed with items, but he doesn’t care — so much so, that he doesn’t seem to realize he just said the same thing two seconds ago.

While I think of this album as a little bit of a valley between the highs of Kimono and Indiscreet, it’s clear that it’s a definite progression in Sparks’ talents — they’re not standing still.  As for an imagined chart of quality-of-album-versus-time, it would be like how a comic strip is drawn huge, so that way when viewed at the standard size, the lines all appear perfectly straight.  You only’ll see the dip in quality if you get real close.

Chelsea: #1 in Heaven was the first Sparks album I got, but Propaganda was the first one I could listen to all the way through.  I understand why KMH is considered a tour de force — there was nothing quite like it before — but there are some big dead spots on Side 2.  With Propaganda it took me a few listens to figure out that the pacing of this album isn’t quite what it should be.  Not all the ballads work the way they should (I always skip over “Thanks But No Thanks”), and the B-sides on this one are so great I wish they’d made the cut.  What amazes me is that this one was more or less tossed off after KMH, and if memory serves a lot of this is songs that didn’t make the cut for the previous record…but the quality is really, really high.

Aila: The fourth Sparks album, Propaganda, is an obvious companion piece to their previous, hugely successful album Kimono My House.  This is the most rock-heavy of any Sparks record, although the trade off is a loss of the small pieces of experimentation heard in the previous Sparks albums.

After the short acapella title track, Propaganda gets off to a flying start with the spiraling, smashing rock song “At Home At Work At Play.”  It’s followed by the marching rock sound of “Reinforcements,” which is in turn followed by the memorably “sing-songy” rock of “B.C.”  It’s probably the most energetic start of any Sparks record, although none of these tracks really match the stunning opening of the Kimono‘s “This Town Aint Big Enough For The Both Of Us.” Notably, there is a bit of dropoff in the middle of this album, until the back-to-back “Never Turn Your Back On Mother Earth,” “Something For The Girl With Everything,” and “Achoo,” all of which are Sparks classics.  The last two tracks, “Who Don’t Like Kids” and “Bon Voyage,” aren’t as memorable, although they are both high quality, relatively high tempo rock songs, very much in context with the rest of the record.

The production on this record is noticeably crisper than on any earlier Sparks album, and it’s easy to imagine that this is, at least in part, due to the sudden commercial viability of Sparks (in Europe at least).  Russell Mael‘s voice is much easier to hear and understand than on previous efforts.  This is a record that sounds like it was made to sell to a mid-70s pop rock audience, and it’s very “accessible” for mainstream audiences – something which is hard to say for many Sparks albums.

Unfortunately, there’s nothing here that Sparks haven’t done yet in terms of style.  The songs themselves are very well honed and it’s a fantastic record overall – clearly better in my opinion than either of the first two Sparks albums, but a bit inferior to Kimono if only because this feels like a “follow up” album rather than something fresh.  By itself it’s a clear success, but in context with all of Sparks’ work it’s a slight letdown.

Personally, this record didn’t initially impress me to the degree some of the other Sparks albums have, at least beyond the first few tracks (which are instantly likable) – although I now consider it one of the better Sparks albums of the 70s.  But it’s basically “more of the same” which isn’t what makes Sparks great for me, even if the “same” that it’s “more of” is something fantastic.  The next Sparks album, however, would mark the significant beginning of Sparks’ reputation for style experimentation, which is when things really get exciting in the history of Sparks’ music.