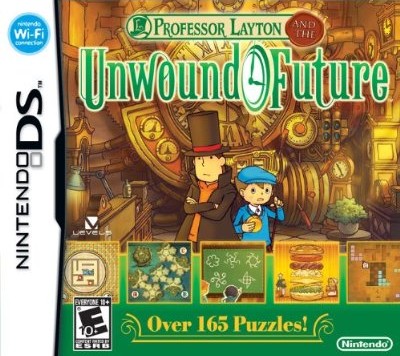 As should be obvious by now, I’m a big fan of the Professor Layton series of games for the DS, particularly since even though I’ve only reviewed the previous game, Professor Layton and the Diabolical Box, I tend to mention Layton in just about every video game review I do.  That said, there’s a reason I’m a big fan – the puzzles are great and the story is enjoyable.

Professor Layton and the Unwound Future is, so far, the best of the three released games.  The story is much more complex than the others, including some real emotional beats, and there’s a bit more variety to the puzzles.  The storytelling is very well done, given out at a proper measure — with the added bonus of a few subtle dialogue jokes along the lines of “I have no reason to give you this but, hey, here’s a puzzle.”  After all, it must get a little difficult thinking of reasons for people to be constantly giving Layton and Luke puzzles to solve.

The puzzles, too — there are a few different kinds that show up, and the older ones have a new twist.  For example, there are much fewer sliding puzzles, and one of them uses two holes instead of one.  Also, thankfully (at least to me; I suck at these): there’s only a couple “untangle this mess of ropes” type of puzzles.  Those were my least favorite of the earlier volumes, so I was happy that the Layton reserves of those was apparently just about tapped out.  Likewise, fewer of the “Which of these cubes will fold up this way” ones also make me happy.  Perhaps I’m just bad at anything involving real-world objects.  This one has more “Which is the right one: A, B or C” and numerical puzzles — and lots having to do with the shapes of numbers (for a while at the beginning of the game, I thought the puzzle-theme was going to be “which numbers look the same when you turn them upside down”).

The number of puzzles actually seems to be slightly greater as well, with the inclusion of a few “puzzle battles” — not really battles as you might expect, but rather a few non-numbered puzzles instigated by non-player characters.  There’re also 3 different mini-games which are all puzzles as well (and more satisfying than the photo puzzle from the previous volume).  The combination of different types of puzzle along with more of them makes this one of the most satisfying games in a satisfying series.  If you’ve not checked out the Layton games yet — while the last in the series, would be a great starter.  There are some story elements which will make more sense if you’ve played the other two games before it, but nothing that would seem too confusing to a new player.