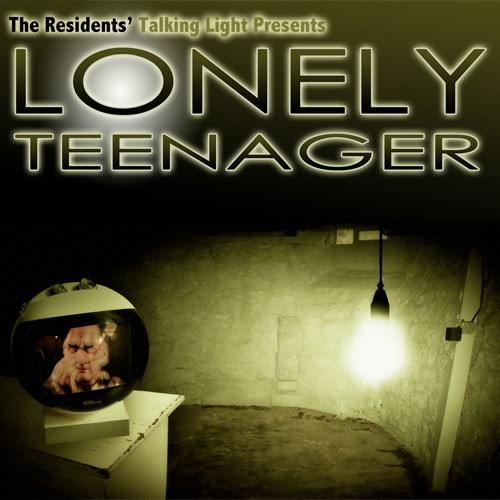 Richard J. Anderson:  When you’re a costumed and masked band, the opportunities for reinvention are endless. Whenever a member leaves,another one can take their place without the audience ever picking up on it—though it helps if the old costume fits the new member. You could change the costumes and the masks. Finally, if it gets really desperate, you can drop the masks and the costumes all together.

The Residents have reinvented themselves several times over their forty-year career, but never quite as dramatically as on Lonely Teenager, a collection of (mostly) re-interpreted and re-recorded songs from the band’s back catalog, stretching back to Duck Stab and as recent as The Bunny Boy. It was a companion piece to the Talking Light tour, consisting of equally drastically reinterpreted songs spanning the discography, paired up with a new look for the band. In some ways, it wasn’t just a new look—it was a new band.

On the Talking Light tour, The Residents dropped the anonymity act, performing as a trio of Randy (the vocalist), Chuck (keyboards and samples), and Bob (guitar). The fourth Resident, Chuck (drums), retired to Mexico to take care of his ailing mother. The eyeball masks and tuxedos were gone, and in their place were welding masks and cyber-dreadlock wigs for Chuck and Bob, but Randy had a face: that of a half-head, bald, old-man mask with huge ears. Lonely Teenager servers as the perfect way for The Residents to re-introduce themselves and their sound to an audience that never knows what to expect.

The six re-recorded tracks are generally a more atmospheric and darker take on the material. This proves to be a neat trick on something like “Boxes of Armageddon” which was plenty dark to begin with. Same with the album opener “Six More Miles” which becomes an eight and a half minute dirge, interspersed with samples of distant train whistles. It does go a bit long, but it sets the stage well. Not every re-recorded track is truly a winner—no amount of atmosphere can make “The Old Woman” not overstay its welcome, but they’re certainly interesting, establishing the new direction for The Residents.

What doesn’t work as well are the two story pieces: “The Unseen Sister” and “Talking Light”. In concert, these were performed with Randy pointing a hand-held projector at some screens on the stage, where a character provided the narration to a live music underscore from Chuck and Bob. Even with the visual element, I think they bogged the live show down. Thankfully, there’s only two here, and one is at the end of the album, so it’s easy to skip over. This leaves you with six interesting reinterpretations of Residents classics—well, five classics, and one updated bonus track from Demons Dance Alone’s bonus disc—and that’s worth the price of admission. Maybe you’ll even like the story tracks, too.

Rev. Syung Myung Me:  It’s kind of interesting how even though re-recording-your-hits seems to be a pretty dire way to make a record that both Sparks and the Residents have had great success with this method.  (About the only other one I can think of that’s any good is Cracker’s Greatest Hits Redux album released to counter a Virgin-compiled non-authorized-by-the-band best of, but that’s not so much great or anything as just decent.  They didn’t screw up the songs, which is good — but it’s still not terribly essential.)  And Lonely Teenager is another pretty cool album in this vein.  Like Rich says, it’s way more atmospheric and creepy, which is always a good thing in my book.

I agree with Rich on the two stories — “The Unseen Sister” and “Talking Light” — they’re much better on the Randy’s Ghost Stories DVD where you can watch the video.  It probably doesn’t help that counter to what I just said about a sentence ago, I find “The Unseen Sister” too creepy and really hard to listen to.  The whole boiling water and christmas tree pasta thing is just so… eaaaaaaaaaaaaaaaaaaaaagh.  So I kinda wish they’d gone with one of the other stories to be on the album, but that’s OK.  Honestly, all the stories are pretty damn creepy.  (I think my favorite is the less-creepy-more-sad “Perchance to Dream”, which also shows up in a very early version on the Kettles of Fish on the Outskirts of Town live boxed set, as “Howard” — fun fact, kids!)  Though, honestly, I don’t know if we need the TWO versions of “Unseen Sister”.

Aila: Lonely Teenager is a pretty dire album. It’s almost all re-workings of previously released songs, and none of them are significant improvements as far as I can tell (if improvements at all). The two new songs are probably the worst part of the record, which is a really bad sign of where the band’s at currently. In short, not only does Lonely Teenager not offer anything of importance, the Residents themselves seem to have finally reached the point of an almost complete creative bankruptcy.

Is there anything I like about this album? I’m not sure. There are a few moments where the music sounds like it might end up being something interesting, but these are quickly quashed as individual tracks diverge to reveal an almost surprising lack of creativity, and the arrival of the ever-annoying vocal element, playing the role of the turd in the punchbowl (which was filled with lukewarm Kool-Aid in the first place). Why even bother to re-record these tracks? I certainly can’t make any sense of it – I suppose these are often darker versions of the originals, and in a few cases the production sound quality is obviously better (I will begrudgingly admit that the band’s production quality has been pretty consistently decent over the last ten years or so – which certainly wasn’t always the case), but the songs are almost all bottom-of-the-barrel in the first place. “The Lizard Lady” might be the one exception – it’s not a vastly superior version, but it is at least something listenable, so I suppose there is something I like about this album. The all-new tracks, “The Unseen Sister” and “Talking Light,” are hardly worth mentioning, but I’m not going to let that stop me. The first few moments of “The Unseen Sister” seem like something nice could happen musically, but as soon as the vocals come in it’s all downhill. “Talking Light,” the lyrics of which the title of Lonely Teenager comes from, is a total muddle and possibly one of the worst tracks the group have ever produced on an album. Of course my perspective is certainly that of a jaded non-fan, but I find it hard to understand how even a dedicated fan of this band could see this record as particularly worthwhile. There are a large number of Residents albums that are better than this one, even recently.

In the end, Lonely Teenager is another one of the many Residents releases I would usually be inclined to deem “for fans only.” However, considering the large amount of material the band has produced in recent years and the very low quality of the majority of said material, I’m going to deem this one “for Residents only.” This really doesn’t need to be heard. By anyone. Ever.