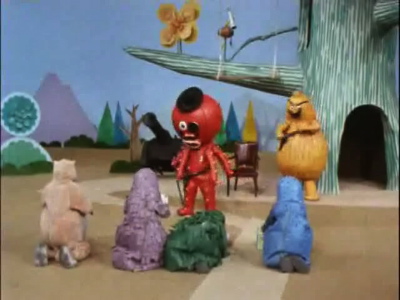 Kure Kure Takora (or Gimme Gimme Octopus, as it’s known in English) is a 1970s Japanese kids’ series of something like 260 short films, each about 3 minutes long, give or take. It’s one of the most surreal things I’ve ever seen on TV. (Kids totally get the best media…)
So, the show. It’s… hard to describe. The title character is an octopus who goes around saying “Kure Kure!” at everything (which means “Gimme Gimme!”/”I want it!”), and his best friend/partner in crime (literally…) is a peanut or a Squash (“Chombo”, I think is his name). Both Takora and Chombo are in love with a weird narwhal thing. Law in their weird little sound-stage village is kept (sorta…) by a badger who’s the sherriff – though, strangely for a kids’ show, Takora and Chombo are usually on the wrong side of the law, stealing from guys who look like they might be Sea Cucumbers?

Anyway, the episodes are typically about Takora deciding he wants something and going and taking it. Usually he gets some sort of comeuppance, but not always. The first one I saw was where the Sea Cucumbers are having a picnic; Takora uses some sort of bizarre magic trick to turn himself into one of them, and he sneaks in and steals their picnic basket, and brings it back to Chombo, where he turns back into Takora, and they gorge themselves on the contents. The Sea Cucumbers come back, see their food gone, and suss out that Takora and Chombo have swiped it, so they beat them up until Takora and Chombo vomit up the food whole, where the SC take it back and presumably finish up their picnic.

In another episode, Takora and Chombo go around hitting the other characters in the head, taking whatever stuff they have on them and putting a headstone by their head. They pretty much go through the entire town/whatever this way, until the badger tricks them, whacks them on the noggin and gives them headstones. This isn’t the last episode, as death isn’t permanent in this world – Takora and Chombo are undone by the previously killed Sea Cucumbers coming back to life.

The episodes are all untranslated, but they’re relatively easy to figure out what’s going on – at least, as much as you ever will; I’m not sure if knowing Japanese would really help – and they don’t make a whole lot of sense anyway. It’d be interesting if someone decided to work on a Kure Kure Takora fansub project (I would love that, in fact), but I really doubt that knowing what’s being said would provide some huge amount of insight. Partially because the episodes are just so… weird… and partially because there isn’t a whole lot of dialogue; there’s some, but it’s not really a speech-heavy show.

However – there’s one thing I’ve got to mention about this – the editing. The editing cranks up the weird factor by about 100. This stuff would already be surreal enough, but every few seconds, it cuts to a still frame of a symbol (basically, if you’ve seen DEVO‘s “Love Without Anger” video – think the series of images that display during the wood-block hits in that song – they’re exactly the same thing). Usually, the symbol illustrates what’s happened (if Takora fails, a huge X comes up; if something good happens for him, a big “GO!” sign pops up, for example), but there’s a few that just seem sort of random – they’re cultural references that are going over my head, most likely. Still, though – it makes me wonder if DEVO saw this show and used that for that video. (It’s feasible, DEVO’s mentioned being fans of Japanese culture for a long time and getting tapes of stuff early on, so perhaps they somehow came across a copy of Kure Kure Takora?)

This must be seen.