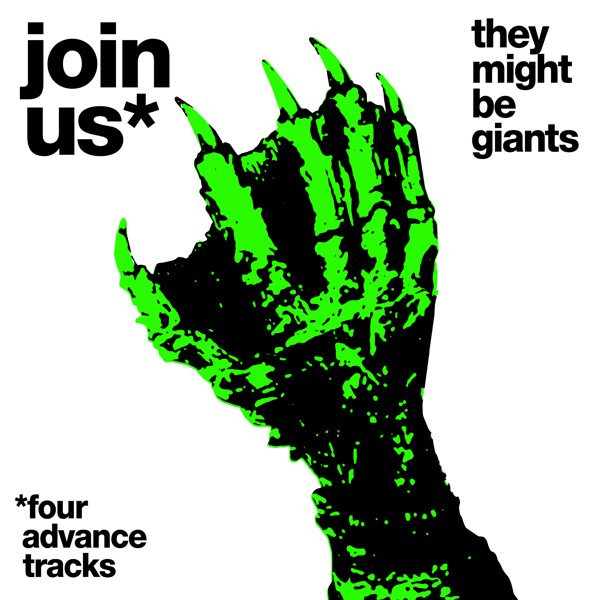 After four solid years of waiting since their last “adult” (or, as I like to say, “real”) album, the more hardcore among the (notoriously rabid) They Might Be Giants fan community were so eager for anything from the band that even something less than stellar would likely have been lapped up with all the desperate eagerness of Oliver Twist begging for another helping of porridge, and (full disclosure), as one of the more infamously devoted among said community, I am undoubtedly particularly susceptible to this possibility. That being said, I believe I can safely say that the four advance tracks from this summer’s Join Us, released digitally this week, bode extremely well for the quality of that LP.

The EP starts with the opening track of the album, “Can’t Keep Johnny Down.” The song features John Linnell doing what he does best?as John Flansburgh describes it, creating a “bittersweet concoction of a very bitchy lyric with an incredibly sunny arrangement.” According to the always helpful Last.fm, I’ve already listened to this song over eleven hundred times, which should give you some indication of its quality. Catchy as all get-out, it has the terribly exciting distinction of marking the return of accordion, which was conspicuously absent from 2007’s The Else. The story of someone defiantly facing off even against those with good intentions, it also features the straitlaced Linnell saying the word “dick(s)” (twice!), which is more personally exciting than it probably should be.

Up next is the Flansburgh song “Old Pine Box,” a folksy ballad featuring vocoder. It’s “a song about a burnout but it’s not sung by a burnout,” he says. Considerably more low-key than the upbeat “Johnny,” the song opens with the solitary sound of the pronounced ticking of a clock. When combined with the title, it evokes a personified Death who is “just too tired to stop.” Clocking in at under two minutes, “Old Pine Box” doesn’t have too much space to grow, but it manages to work up an atmosphere even with its short runtime.

This is followed by “Cloisonné,” easily the strangest song of the four. Another Flansburgh tune, “Cloisonné” takes its title from an ancient technique for the decoration of metalwork, but the connection between this activity and the lyrical content of the song is tenuous. Over an insistent backing of saxophone and Linnell’s bass clarinet, Flansburgh strings together various bits of nonsense, devoting a fair bit of space to the bothersome activities of Sleestaks (for those of you who did not, like The Johns, come of age in the 70’s, that would be a race of reptilian creatures from Land of the Lost). “Cloisonné”’s bizarreness is fascinating.

The preview EP is rounded out by the heavily-synthed  “Never Knew Love,” which has The Johns going back and forth on lead vocals. I always enjoy a good vocal collaboration between them, but in my mind this is the weakest of the selections. A Linnell who is amazed by love that he “never knew could be like this” alternates with a poetic falsetto Flansburgh. While Linnell never explicitly states in his bits that his amazement over his current state of love is positive, and many of the dense Flansburgh lines are ambiguous, Flansburgh has described the song as “optimistic,” and that’s likely what I don’t like about it? I prefer my TMBG songs to remain in familiar dark and hopeless territory, thank you. Still, this preview EP has managed to do the impossible — make me even more excited for the new album. It is well worth the investment of your mp3-buying dollars.