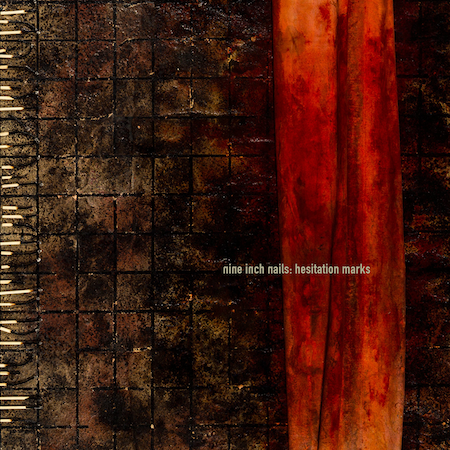 It’s no secret that I’m a pretty big fan of Nine Inch Nails.  Not the hugest one — I’ve still not seen them live or anything (and I’m still a bit of a baby to watch The Broken Movie… though I probably will at some point…. maybe), but I have all the albums and I really do enjoy them.  I’ve really enjoyed watching how Trent Reznor’s grown as a songwriter and lyricist.  Some of the NIN lyrics have left me cold; they can be a little overwrought sometimes, which is one of the reasons why I loved Ghosts I-IV so much.  But with Year Zero, he’s really expanded his vision.  (And I’m still sad that the Year Zero TV series never happened.)  And with the newest album, Hestitation Marks, though he’s gone back to more autobiographically-inspired material, the growth is there.  In interviews, he’s said that Hestiation Marks is a bit of a bookend to The Downward Spiral — he’s even jokingly called it The Upward Spiral, and it’s really interesting to hear how his lyrics have matured some.  The third single “Everything” got a bit of ribbing just because it’s actually upbeat (though still defiant) — something most people never thought they’d get from a Nine Inch Nails record — but it’s actually a really great song, and I think something that’s needed from Trent.  There can be a sense of wallowing with some of the earlier records.  Wallowing isn’t necessarily a bad thing, but sometimes it can be a bit much, particularly in the mouth of a relatively young man.  The biggest example of this I can point to is “Hurt” — which is a great Nine Inch Nails song… but an absolutely amazing Johnny Cash one.  Johnny Cash has the age that makes “Hurt” a sad song looking back at failures, where when Trent sings it, it just doesn’t seem to have the weight needed to launch it in the upper atmosphere of quality like Cash.  Trent makes it a little adolescent, but Cash gives it the weight it needs.

Hesitation Marks, on the other hand, has much less of that — and is more about growing as a person.  Even the title hints at that — where The Downward Spiral ends with the narrator attempting suicide — but “Hesitation Marks” or “Hesitation Wounds” are what doctors call marks on an arm from someone who’s attempted to slash their wrists and tried testing the blade first.  Hestiation Marks is the narrator not going through with their suicide and working on things getting better.  The first part of the album is quite dark, still with songs like “Copy of a” and “Came Back Haunted”, the latter of which describes the suicide attempt by the narrator — “I said goodbye/and I had to try/but I came back haunted”, but the attempt failed (thankfully), and he’s haunted by what he could have done, and that he’s “not who [he] used to be”.  Things get darker as he’s still trying to deal with the factors that contributed to the suicide attempt, but by “Everything”, he’s on the upswing — not that everything is sunshine and lollipops from here on out as evidenced by “Satellite”, “Various Methods of Escape” and “Running”.  (As an aside, would anyone else really like to hear a NIN version of “Sunshine, Lollipops and Rainbows” by Lesley Gore?)

The album ends with “While I’m Still Here” (and the coda of “Black Noise”), which is a sign that while everything isn’t great, the narrator’s going to try to make a go of it.  And I think that’s the great thing about Hesitation Marks — it’s a reminder that while things may suck, and suck an awful lot, there’s enough that’s worth it to keep going, too.  It’s a more adult realization about taking the good with the bad, and that while the darkness still remains, you can’t let it win.