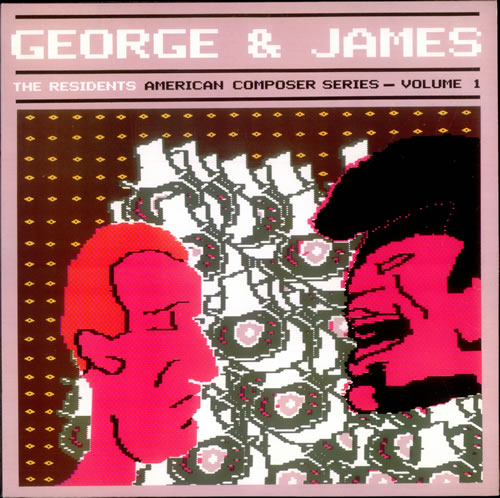 Why, then, is this album so awful?

Here’s the concept: The Residents wanted to put out a series of albums covering the works of great American musicians and composers, calling it, naturally, The American Composers Series. They would pick a pair of artists and devote a side of a record to each, performing a sampling of their famous works. Unlike, say, The Third Reich ‘n’ Roll, these covers would be respectful of the original source material, but with that Residents sound. They had enough artists picked out that they could do a record a year from 1984 to 2000. It sounds like a great idea on paper.

It falls down in execution. Like a ton of bricks. From the top of the Empire State Building.

Let’s take each side individually, as they’re both miserable for different reasons. George Gershwin is given top billing, so let’s start with that. The Residents tackle “Rhapsody in Blue,” “I Got Rhythm,” and “Summertime,” making them sound similar to the Chub songs on The Tunes of Two Cities only worse. While The Residents progressed incredibly since Meet The Residents, their musicianship is far from where it needs to be to take these pieces on, and do them well. They manage to turn Gershwin from flowing and beautiful to plodding and boring. The air raid siren that leads off “Rhapsody” should be enough warning.

The James Brown side gets a whole different set of complaints. This side is an abbreviated cover of Brown’s famous Live at The Apollo album, including the spoken intro. Again, it sounds great on paper, but it done so badly that it makes you wonder how it made it to the pressing plant without anyone raising a concern. First, there’s the vocals… The Singing Resident has never had the best voice, but whoever thought to slow it down into a slurring growl needs a slap. Comparisons have been made to “The Angry Angakok” from Eskimo, but the voice made sense there. As for the music itself, the sound thin and tinny. James Brown needs more power than what The Residents give it here. If they were going for parody it might have worked, but this was supposed to be a serious album.

A while back, The Residents released a download called “JB @ 45” which was the James Brown side played at (almost) 45 RPM. It fixes the vocals, but nothing else. It’s a sad example of what could have been, but not enough to redeem a failed experiment. The Residents only did one other album in The American Composers Series, and then dropped it. We’ll get to that one later. In the meantime, avoid this record unless you need to fill a hole in your collection. Maybe avoid it even then.

Rev. Syung Myung Me: Urgh.  This one is so awful.  I love the idea of the American Composers Series, and part of me wishes they’d continued with it (Stars & Hank Forever isn’t that bad — half of it is really good and the other half is kind of meh, but more on that later), but… this is just so, so bad.  Perhaps made even worse for the fact that the “Man’s Man’s Man’s World” single that came out right after the album was SO GOOD.

The Gershwin side is probably the better of the two sets but, well, honestly, that’s not saying much.  If you’re old enough to remember when the primary method of sharing music wasn’t mp3 or even mp2 but MIDI files based on songs, you’ve basically got a general idea of what these sound like.  If you’re not, basically it’s just really rinky-dink and lame sounding.

The James side… wow.  For someone the Residents hold in such high esteem, they sure insulted him on this one.  Muddy, terrible sound, boring arrangements, awful vocals, terrible sleeve art.  I’m trying to think of a redeeming factor, and, well, honestly I can’t.  I guess that it’s out of print is nice?  But that just makes a weird rarity factor that might encourage folks to pick it up — for a while, this was only available in import, so I bought it at an inflated price, no less — so, that’s probably bad too.

Aila: Oh shut up, Residents. That pretty much sums up my opinion of George and James. It’s an album of covers of Gershwin and James Brown compositions (a strange pairing, but that’s not really the problem). I don’t understand why they bothered putting this one out, to be honest.

The first few tracks are the Gershwin songs, covers of “Rhapsody In Blue,” “I Got Rhythm,” and “Summertime,” the standard versions of which are considered absolute classics for good reason. They are attempted in a typical Residents manner, but it doesn’t work very well. They might have been interesting as b-sides or something on that order, but for a Residents album they don’t cut it – in the context of Gershwin, they are just vastly inferior versions of great compositions. The rest of the album is actually far worse, the James Brown tracks. I’m not going to even bother going thru ‘highlights,’ because they frankly don’t exist for me. It’s got all qualities I find most annoying about The Residents, especially the vocals, and it basically mangles the material (I’m not a huge fan of James Brown, although I do appreciate some of his stuff, but damn – not like this!). The production sounds cheap too, just to put the cherry on top of this steaming turd.

Overall, there’s not much to recommend with George and James. It isn’t one I can imagine Residents fans being thrilled with, and it’s definitely not one fans of Gershwin or James Brown will be happy with. It’s actually kind of insulting. This is the worst Residents album I’ve heard so far, worse than Fingerprince, which I thought was basically a piece of crap. If you don’t have this album, steer clear. If you do, melt it down for the recyclables, that’s the only way it will ever be of any value.