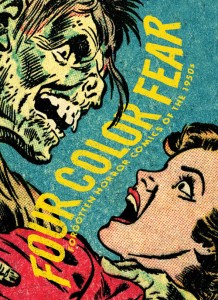 Fantagraphics is known as much for their work with new and innovative artists as for their archival projects — and for the high quality of both.  They recently got the EC Comics license and have been putting out artist-themed compilations like Corpse on the Injun! — but they’ve also put out books that wouldn’t have existed without EC… even though they have no EC content.  One of the best of these is Four Color Fear, a collection of horror comics from other publishers attempting to cash in on the popularity of Tales From The Crypt, The Vault of Horror, and The Crypt of Terror.  And while a lot of these may have been forgotten for a reason, there are still a few gems.

Greg Sadowski put together a wonderful collection complete with in-depth notes in the back of some of the best from comics that tend to be thought of dismissively as also-rans.  What gets forgotten is that there were some great artists (including a few who also did work at EC like Basil Wolverton and Wally Wood!) and some pretty good storytelling.  My favorite story in the collection is Howard Nostrand’s “What’s Happening At… 8:30 PM” for Harvey Comics (from Witches Tales #25, June 1954) which visually as a bit of an EC look — kind of a mix of Jack Davis and Wally Wood — about a town that’s been deserted due to what’s going to happen at the titular time.  (I won’t spoil the twist — it’s a pretty good one, even if you might predict it due to the characters’ antennae.)

The way that some publishers went more for aping the EC style where others told more-or-less straightforward horror stories is interesting too; especially as there’s different results to each.  “Green Horror” by the Iger Studio (Fantastic Fears #8, July-August 1954) is an attempt to be like EC, but just ends up being kinda goofy and lame.  (The John Benson-edited anthology of MAD-knockoffs The Sincerest Form of Parody also features work from the assembly-line style of Iger which tends to not be terribly successful in that genre either.)  Bob Powell’s “Colorama”, on the other hand, from Harvey’s Black Cat Mystery (#45, August 1953) is a second-person narrative like some of the best ECs that can hold its own amongst those comics.  The impressionistic art is really appealing and the story has noirish tinges that make for some of the best horror.  “Colorama” is a really amazing story, and well-worth checking out for fans of the horror genre or even folks who want to see what comics can do even while working in a more traditional form.

While there are some lame stories (typically from the aforementioned uninspired Iger Studios), they provide a bit of context to the comic landscape in the early 1950s.  Most of the stories, though, range from good to great, and if you’re a type who has the complete EC horror libraries along with a subscription to Creepy, this will slot in real well in your collection.  And, well, even if you’re not that type, it’s still a great collection of some unjustly overlooked comics from the 1950s.