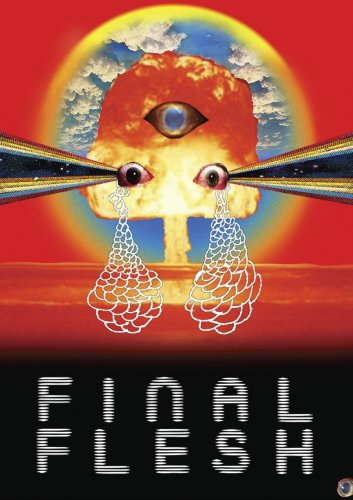 Song-poems are super interesting.  They might not always be good (though there are some definite diamonds in the rough there), but it’s such an interesting concept, even if it IS mostly just a way to separate suckers from their money.  I’ve wondered about the song-poem model as applied to other media.  Though you might not expect it,

The film is edited together from four different shorts, each starring different actors as (more-or-less) the same characters, the Pollard family, a husband and wife and grown daughter in an apocalyptic scenario.  There’s nothing particularly apocalyptic about the scenario, other than a title card that explains that the world’s about to end before the film starts.  Given that the film is made by a porn studio, there’s quite a lot of nudity — though, not much that’s remotely sexual.  In fact, that’s one of the funniest things about the film — the way the actors throw themselves into the work when they’re finally given something even kinda-sorta porny to do.

That said, the song-poem comparison isn’t entirely accurate; the actors seem to be — if not explicitly in on the joke — aware that this is an art project of sorts rather than someone’s legitimate fetish video.  That gives the films a much more enjoyable feel to it; if anything, it was probably a fun respite from the standard grind.  (No pun intended.) (Well, maybe a little.)  The films are mostly silly surrealism — characters give birth to eggs and melons, breast-feed raw steaks named “Mr. Petersen”, put clocks in freezers to avoid conciousness and attempt to throw acid in the face of God.  There’s a bit of narrative, but it’s best to let the film wash over you like the more deeply weird aspects of Wonder Showzen, or, well, basically the entirity of Xavier.

Of the segments, my favorite is the second, which is probably the goofiest, featuring God communicating via slips of paper shoved under the door and a hilarious scene involving scripts-within-scripts going several levels deep.  The last segment is the most “arty” and has a definite goth feel to it, what with the daughter trying to get her (temporarily) dead parents to marry, then consummate the relationship to result in a dead baby brother.  I’d say it makes more sense than I make it sound, but, no, that’s a lie.  But that’s OK.

It is a little slow — the editing isn’t as tight as it could be; though, too, that’s probably not the fault of Chatman.  And, of course, the acting’s not particularly great, but probably better than you’d expect.  The film’s only a little over an hour, but it does feel longer.  Also, if you’re not noticing, it might be even longer than that — the film loops after the last segment, which goes in with the theme of the film being different slices of the same vague story.  It’s a great concept, but I can’t imagine anyone watching it again all the way through.  (Though, it’d be interesting if there was some way on the DVD to make the film slightly different each iteration through.)

Will Final Flesh be your new favorite movie?  Probably not.  And it’d be weird if it was.  But that said, it’s definitely worth watching, and the sense of fun on the set makes it much more enjoyable than you might fear it would be.  It might be a PFFR footnote, but it’s definitely worth at least a rental for fans of the group.