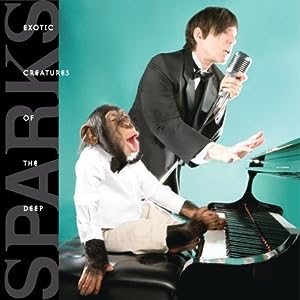 Cover of Exotic Creatures of the Deep

Rev. Syung Myung Me:  Exotic Creatures Of The Deep is kind of like Hello Young Lovers Part II, though I think it’s even better than that record.  It’s still in that Lil’ Beethoven Does Rock vein of the previous album, but it just feels more successful.  Aside from the intro track (which is based off the last track “Likeable” and appears in “The Director Never Yelled ‘Cut’”), the opening is “Good Morning”, which, in a way, feels to me like a spiritual cousin of “Dick Around”.  It’s a great song about a one-night stand, and includes the brilliant line “I hope it’s just your laugh that is infectious”.  If it is possible for one line to make me very happy, that line does it.

There’s no main theme running through this album, either — nor does the title really have anything to do with the record (except that, as a fan of weird undersea critters, both Exotic Creatures of the Deep and actual exotic creatures of the deep are awesome).  Romance-gone-awry is a common topic, though, as it often is for Sparks.  Aside from “Good Morning”, there’s “(She Got Me) Pregnant” (perhaps the result of “Good Morning”), “I Can’t Believe You Would Fall For All The Crap In This Song”[1], “Let The Monkey Drive” and “Photoshop” — all different stages of a bad romance, which has never been written about in popular song at all.  The best of these, though, is either “Good Morning” or, more likely, “Lighten Up, Morrissey”, which is both good advice (for reals, mang) and about the dangers of idol worship in a relationship.

Those are all great songs, but the ones that aren’t anything to do with romance are equally strong.  “Strange Animal” is a great piece of meta-songwriting — where the citizens of a song are disturbed by another character coming in to tell them what’s wrong with the song in which they live… and, many of which could be criticisms levelled at Sparks’ own songwriting.

Anything that doesn’t really work on this album?  Hm.  Not really, honestly.  Any lows on this album are merely mids — my least favorite are “I’ve Never Been High” or “The Director Never Yelled ‘Cut’”, but neither of those are bad in any way, and are actually quite catchy.  I think the only reason that Exotic Creatures isn’t one of my big favorite albums is that the highs aren’t quite as high as Sparks are capable of — but they’re still better than 99.9% of bands.  I mean, swear to god, I would practically kill to write as well as the worst Sparks song.  (Well, OK, maybe not anything from Interior Design.)

[1] An aside:  I’ve seen this one written with “Crap” as “Cr*p”.  Seriously?  SERIOUSLY?  Come ON.  I mean, jeez, expletives censored like “f*ck” is a huge pet peeve of mine — if you don’t wanna use the swear, then don’t at all.  Or, honestly, if you’re gonna use it, assume your readers are smart/mature/whatever enough to handle seeing a vowel.  Or aren’t going to be baffled as to what “f*ck” could possibly be.  But, honestly — “Cr*p”?  That’s one step above censoring “crud” or “pee” — words that are already used AS EUPHEMISMS FOR CURSING.  J*s*s F*ck*ng Chr*st.

Aila: Exotic Creatures Of The Deep is a Sparks album that grew on me like the absurd shrubbery of a Chia Pet. The interesting thing about that (if any of this is interesting!) is that I already really, really liked the album when I first heard it. But since then, every time I’ve heard it I’ve liked it more – to the point where I’m now pretty sure it’s one of the best albums the band have made (since I seem to be so into rankings with these Sparks reviews – I mean like a ‘Top 5’).

The album opens with what is essentially a tease to the final track, a layered vocals-heavy preview of the nearly perfect ender “Likeable.” After that it’s the ‘obvious single’ for the album (as though Sparks have ever been a singles band, especially the last decade or so), “Good Morning.” This is a fairly up-tempo, rocking song which sounds like it could have easily fit in on Hello Young Lovers. In fact, most of the songs on here are nearly identical in terms of style to the previous record, but I think it’s probably a little stronger song-to-song. This is also a record which contains a lot of humor, arguably the silliest in terms of humorous lyrics since Sparks In Outer Space (albeit vastly superior to that album). But these songs, even when they’re a little silly, work on multiple levels and never feel like they are ‘comedy songs’ or ‘novelty songs’ in any way. The obvious examples of these are “I Can’t Believe That You Would Fall For All The Crap In This Song,” “Let The Monkey Drive,” and “Lighten Up, Morrissey.” All of these are brilliant songs in their own right – the humor is just like an added bonus. And like so many Sparks albums before this one, there are other hidden treasures and surprises basically throughout the entire album that become apparent with repeated listening. There are a couple songs on here which have become some of my very favorite Sparks songs (in so far as, if I were to compile a list of the top 20 Sparks songs – since I’m clearly obsessed with ranking everything – these probably make the cut), the hauntingly brilliant “Strange Animal” and the grew-on-me-like-an-aggressive-skin-cancer “This Is The Renaissance.” This is an album of many highs and very few lows. “The Director Never Yelled Cut” isn’t as amazing as the song that follows it (“Photoshop”) for instance, but it’s still far from a weak track.

Sparks’ 21st album is one of their best. Unfortunately, it’s also their last standard album to date (although it’s only been a few years), The Seduction Of Ingmar Bergman being essentially an audio play. I’ve mentioned it many times before, but it constantly amazes me how Sparks seem to improve with age (apart from a hiccup or two along the way in the 80s). I can only imagine, if they keep making albums, whatever comes next will be at least as brilliant as Exotic Creatures Of The Deep.