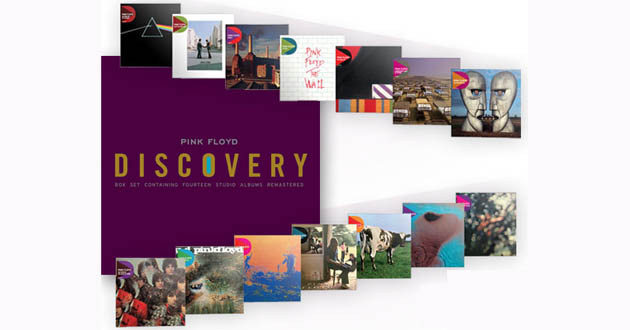 So one of my favorite bands from my misspent youth in the 1970s-80s decided to remaster every album they’ve ever done, and release them in a huge box set called Discovery.  This is every Pink Floyd album from 1967 to 1994, sounding absolutely better than they ever have; unlike a lot of CD remasters, these aren’t just louder versions of the old albums.  They have all the sonic richness you’d expect from one of the first bands to treat the recording studio as a science lab (with no small amount of help from famous producers of the era like Alan Parsons and Bob Ezrin).  There’s probably nothing I can say about the band that you don’t already know if you’re of a certain age, like me, but I’ll include a couple thumbnail sketches for the younger folks as well.

The Piper At The Gates Of Dawn (1967) The first Pink Floyd album, and the only one with the original Syd Barrett lineup.  Also, one of the best.  It includes some of Syd’s fairytales like “The Gnome” and “Bike,” but also one of Pink Floyd’s best trippy instrumental jams, “Interstellar Overdrive.”

A Saucerful Of Secrets (1968) Syd’s mental/drug-related issues meant he only showed up for one song on this album, and the two best tracks are more space-themed jams, namely the title song and “Set The Controls For The Heart Of The Sun.”

Music from the film ‘More’ (1969) A soundtrack to a movie nobody’s ever heard of, Pink Floyd’s third album is mostly instrumental, and mostly interesting for guitarist David Gilmour‘s expanding role in the band.

Ummagumma (1969) Pink Floyd’s first double album seemed weird at first glance, but actually made perfect sense for a band trying to define itself after its founding member had dropped out of sight, and the remaining members decided what kind of band they were going to be.  Disc One was a live album, with three of the band’s spaciest jams (plus the creepy B-side “Careful With That Axe, Eugene“) as if they were proving they could survive very well without Syd Barrett, thank you.  The second disc gave half a side to each member to create a mini solo album…   the results are varied, kind of funny, and if you’re into Pink Floyd minutae, a perfect snapshot of how each member’s contributions to the band would evolve over time.  However, I’d mostly recommend the live disc.

Atom Heart Mother (1970) This is one of my favorite Pink Floyd albums even though it’s NOTHING like anything else they ever recorded.  That was on purpose: the title song took up the whole first side of the vinyl album, and is an orchestral suite that devolves into skeletal electronic noodling, then bursts back into sunny acid-tinged melody at the end.  It’s more like modern classical music (as it was known at the end of the 1960s) than rock music, and it’s just awesome.  The rest of the album is two sunny, folky tunes and then another weird sound collage/music track called “Alan’s Psychedelic Breakfast” after the producer of the album, Alan Parsons, who would go on to help the band use odd effects, studio tricks, tape manipulation and found sounds a couple of years later on their most famous album ever, The Dark Side of the Moon.  On Atom Heart Mother, though, they were just trying to be surreal, which is why the album cover has a cow standing in a field with its ass toward the camera.  Take that, reality.

Meddle (1971)  Side 2 of this album on vinyl was taken up by the long, trippy, gorgeous 20-minute song “Echoes,” easily their best psychedelic song since their initial burst of creativity in the mid 60s.  Also notable on this album is the first song, the mostly instrumental “One Of These Days,” which only featured one spoken line (“One of these days I’m going to cut you into little bits”) and gave an idea of the harder-edged, scary aspect the band would take on, both musically and thematically, during the 1970s.

Obscured By Clouds (1972)  This is probably the best Pink Floyd album most folks have never heard.  The soundtrack to another obscure film (called “La Vallee”), this was their last album before they became insanely famous, and before the perspective of both the band and their fans changed. It has some hippie-ish jams (good ones) but also darkly catchy songs like “Free Four,” a sing-along song about mortality.  And that just rocks.

The Dark Side Of The Moon (1973)  It’s almost hard to talk about this album because it’s become so much a part of pop culture.  I’ll just say it was the first Pink Floyd album I ever heard (several years after its release- hell, I was eight when it came out), and it exploded my brain.  The seamless flow of the songs, the darkness of the lyrics (which I knew were dark even though at that age I couldn’t fully grasp why), the electronic bits, the wordless gospel interlude…  Pink Floyd (and Alan Parsons) made me think I’d stumbled on some beautiful, sad, exciting secret about what it meant to be an adult.  In retrospect, the album felt more like a warning, but still a gorgeous one.

Wish You Were Here (1975)  The lengthy, atmospheric 2-part suite that makes up the bulk of this album is a dreamy electronic tribute/apology to the band’s founder who’d vanished almost a decade before…  “Shine on You crazy Diamond,” indeed.  The remaining three songs are all classics in Pink Floyd’s repertoire, and David Gilmour’s vocal on the title song is so plaintive, I always find it kind of moving.

Animals (1977)  One of the most overlooked Pink Floyd albums, which is a shame because it’s seriously one of the best.  The subject matter is dark: are we all just Sheep (the manipulated), Dogs (the enforcers), or Pigs (the ones with the power)?  In three long songs, plus a couple of bookends, Roger Waters (who had pretty much taken control of the band at this point) paints an unflattering portrait of the entire human race.  If it pisses you off…  Pink Floyd were one of the few non-punk bands trying to do that at the time. Also, some of the guitar solos on this album are insanely epic.

The Wall (1979) It was weird, it was ugly, it was brassy and it was HUGE.  I was in high school when “The Wall” came out and nobody knew what the fuck to make of it at first.  In retrospect you can hear some of the orchestral gestures from “Atom Heart Mother,” plus some of the mortality issues from “Obscured By Clouds.”  I knew none of that, nor did anyone at my high school, where it eventually became a touchstone. Once some of the (many) awesome songs from Roger Waters’ breakdown started to get radio play, people embraced it and it became a huge seller.  GINORMOUS THEATRICAL PRODUCTIONS ABOUT DEPRESSION FOR THE WIN.  And despite what a lot of reviewers say now, I really don’t think there’s a bad song on it even though, yes, “Comfortably Numb” is probably the best of the batch.

The Final Cut (1983)  A gorgeous, gorgeous album which tends not to get its due because Pink Floyd as a band was falling apart at this point.  If you ignore the band drama, this is an orchestral, funereal meditation on war, mortality, loss, and Cold-War politics that just slays me every time I listen to it. There are a lot of references to the time… mentions of Reagan and Thatcher, Russia and Japan.  The specifics have shifted, but I’d bet the anxieties haven’t.  This remastered version of the album also includes “”When The Tigers Broke Free,” a song from the Pink Floyd: The Wall movie. (The soundtrack is NOT part of the box set.  If you’re interested about what it is: The band re-recorded the album for the film, with a lot of guest stars (most notably Bob Geldof) taking the vocal parts.)

A Momentary Lapse of Reason (1987) David Gilmour won the legal right to record as Pink Floyd again, and this album is pretty good…   listening to it this week, I was surprised how many songs I remembered from the radio.

The Division Bell (1994)  I saw Pink Floyd on tour in 1995, and I doubt they played many songs from this. It’s not exactly a crowning achievement. It was an excuse to tour again.