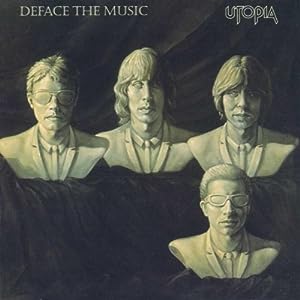 Cover of Deface the Music

Utopia’s Deface the Music is the best album the Rutles never recorded. It fits perfectly in that mold of knockoff Beatles tunes that are just as good (and sometimes better) than the originals. Like the Rutles, on this album, Utopia does sound-alikes from every stage of the Beatles’ career, though unlike the Rutles, very few are direct homages to certain songs (except for the last track, “Everyone Else Is Wrong”, which is dead on “I Am The Walrus”). It’s more about a general sound and feel, and it gets it dead on right.
“I Just Want To Touch You” sounds like it could fit in on just about any of the first few Beatles records; perhaps it’s the alternate-universe flip to “She Loves You”, or a cut scene from A Hard Day’s Night. One can only assume the entire band bowed at the end of the song. “Crystal Ball” is likewise early, with a sound like the more raucous numbers — “Roll Over Beethoven” comes to mind, but, again, there aren’t really any direct nods to that song.

My favorite is “Always Late” which has a jangle that doubles not only as a lost cut from McCartney – but it could easily do double duty as an outtake from Catnip Dynamite by Roger Joseph Manning, Jr. — which is another phenomenal album that everyone should own.

It’s really fun to put these on an iPod and have them shuffle — about the only way you can tell that these aren’t legitimate Beatles songs is because they’re not cuts you’ve heard a billion times before. You could probably get away with re-packaging it as a Beatles bootleg of outtakes and see if anyone notices that’s not the Fabs. About the only hint is that the vocals sound slightly more American. While Neil Innes of the Rutles can do a dead-on John Lennon, Todd Rundgren’s nailed George Martin. The two together would make the perfect fake-Beatles album… perhaps good enough to render the real thing obsolete.