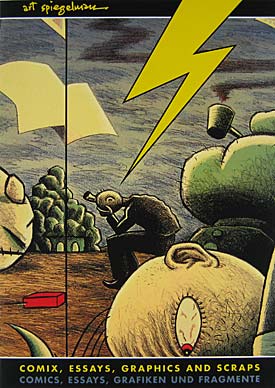 It might be a little odd to have an Art Spiegelman book that doesn’t have a whole lot of comix, and mostly essays, but it works.  Comix, Essays, Graphics and Scraps: From Maus to Now to Maus to Now is a catalog published by RAW Books to go along with a travelling exhibition from the late 1990s of Spiegelman’s work.  There’re a few examples of his comix, but most of those are from Breakdowns or Maus; the really interesting thing is the collection of sketches showing how he worked — doing drafts of each individual Maus panel and showing his process for that project.

Even better, though, is the collection of essays and introductions to other books.  Some of them I’d read before — like his introduction to Read Yourself RAW, but most was new to me.  He’s best when he’s analyzing comix and how they work.  In the beginning, he analyzes panel-by-panel his strip “Don’t Get Around Much Anymore” (the original strip appears in Breakdowns, the piece in this book is from an issue of Alternative Media which published in the same issue a cover story on Breakdowns).  Spiegelman explains what he was trying to do with the strip — some things I picked up on in the first reading of the strip; other things I completely missed the first time, but made the strip so much more.

Near the end of the book, he does the same thing for the utterly brilliant story “Master Race” from EC Comics’ Impact #1 by Bernard Krigstein, going through each of the eight pages of the story, panel-by-panel explaining Krigstein’s composition, layouts and technique.  It’s utterly fascinating (and, if you haven’t read the original story, it’s printed alongside and very much worth reading).  The thing that Spiegelman doesn’t mention which I didn’t realize was that the story appeared in Impact, which was one of EC’s “New Direction” titles created to align EC with the Comics Code  — none of which have a terribly great reputation.  “Master Race”, however, shows that great work was still being done by EC’s non-MAD titles post-Code.  (That said – I have an issue of Impact, and rest assured — “Master Race” is the exception; Impact in general was well-made, but usually with stories that often erred on the schmaltzy side.  The one I remember most was the issue’s cover story, where an old man was cranky to a little girl selling lemonade out front, but when she fell sick, he paid for her doctor. At least it had great Jack Davis art.) 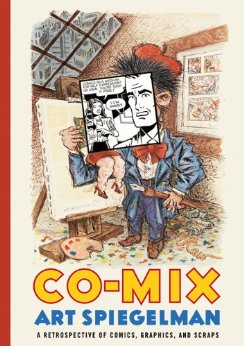 One thing I’m curious about though — when looking this up to see if it was still in print, I discovered that it wasn’t (though relatively easy to find used copies of) — but the upcoming book Co-Mix sounds like it might be a reprinting of this book with a different cover and title.  Once Co-Mix comes out, I’ll take a look at it to compare — but if these two books are the same, that’s a very good thing.  This work deserves to be in print.  Art Spiegelman is a fascinating author when he talks about comix theory — and I don’t know if he gets credit for that.  This book definitely fixes that.  If you’re a cartoonist, or just interested in cartooning, you really need this book.  Spiegelman’s work shows you how to do good comix, and how to think about and read comix.

One of the essays talks about how one time he dropped in on one of Harvey Kurtzman’s classes with a pile of Kurtzman’s work in tow to show his students they were learning from a national treasure.  Art Spiegelman should know from national treasures — he’s one too.