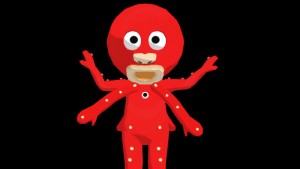 Kure Kure Takora (or Gimme Gimme Octopus, as it’s known in English) is a 1970s live-action Japanese kids’ series of something like 260 short films, each about three minutes long, give or take. It’s one of the most surreal things I’ve ever seen on TV. Kids totally get the best media…

”/”I want it!”), and his best friend/partner in crime (literally…) is a peanut or a Squash (“Chombo”, I think is his name). Both Takora and Chombo are in love with a weird narwhal thing. Law in their weird little sound-stage village is kept (sorta…) by a badger who’s the sherriff – though, strangely for a kids’ show, Takora and Chombo are usually on the wrong side of the law, stealing from guys who look like they might be Sea Cucumbers?

….Read the rest of this article at Unicorn Booty.