If you’re a fan of British Comedy, you likely know the name Richard Herring. In the ’90s he was part of a double-act with Stewart Lee, and did a number of great shows, like This Morning With Richard Not Judy (available on YouTube) and Fist of Fun (available on DVD). Currently, he tours and has a number of stand-up films available at gofasterstripe.com, but you might know him best from Richard Herring’s Leicester Square Theatre Podcast (or RHLSTP, pronounced “ruh-lis-tuh-puh”). And if you know RHLSTP, you’re already familiar with the concept of Emergency Questions. 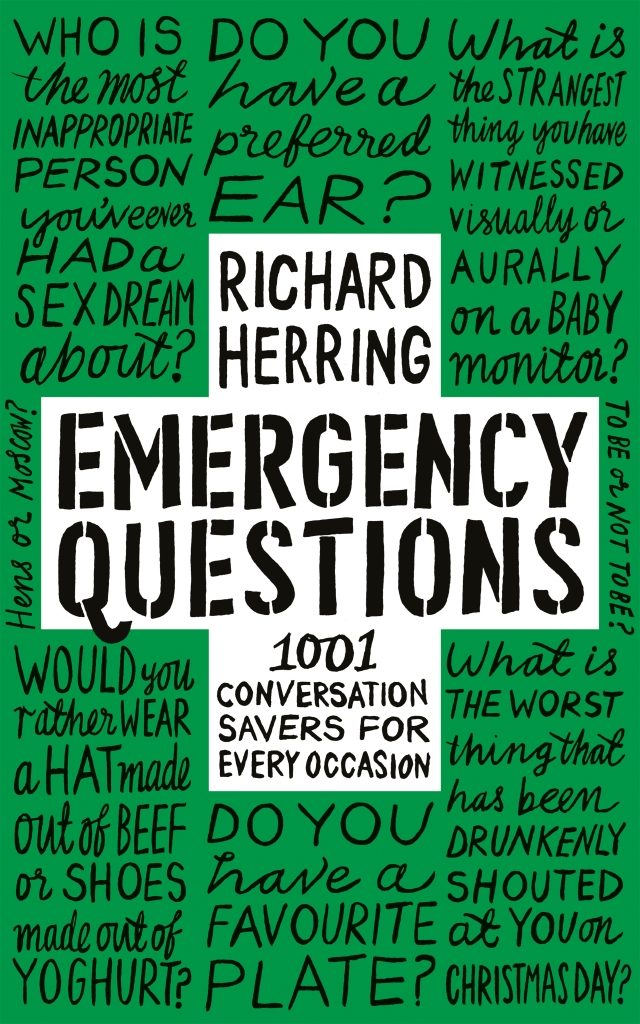 If you’re not — it’s simple. RHLSTP is an interview podcast — Herring’s quite an adept interviewer — and when there’s a lull in the conversation, to keep things moving, Herring pulls out his book of emergency questions. They’re generally strange, bizarre and often quotable: “Which would you prefer? A hand made out of ham or an armpit that dispensed suncream?” is a common favorite.

Now, you can get Emergency Questions of your own in a handy-dandy book. I actually have an earlier edition that only has 515 questions (the last question is mine is “Will you tell a friend to buy this book?” and, as you can tell, the answer is yes), though the current edition has 1,001 questions. But then, mine is signed with an additional handwritten bonus question so I’m satisfied.

In the forward, Herring explains that while his emergency questions are often silly, they have a function of encouraging people to open up. Most of the questions aren’t simple yes-or-no, and the ones that are tend to invite a story. As Herring writes, “Comedians want to entertain, so even if you ask them a dull question like Have you ever tried sushi? then they will try and come up with a story. And if it’s a question they’ve not been asked before, then chances are, it will be a new story or one they’ve never thought to tell.”

And, of course, the book of Emergency Questions would be great if it were just the questions, but Herring answers a number of them himself and offers clarification on some. While not necessarily a book you’d sit down to read cover-to-cover (though you could, I’m not your mom), it’s a delight to turn to a random page and discover a question.

As for me — my handwritten question was “Have you ever travelled by hovercraft or other hover-based transport?” Oddly enough, the answer is yes! When I was 13, I got to go on a trip to Australia and New Zealand with a group (People to People Student Ambassadors, if you’re curious). They had a number of great activities; we got to go to the countries’ parliaments, lots of museums, animal parks and the like. And one of the activities was getting to ride a hovercraft. As a Monty Python fan and lover of bizarre machines, I was down. To be fully honest, I don’t remember too much about it other than it was pretty fun, and we mostly went on the water, but the fact that we could go on land, even if just to pick up and drop off people at the beginning and end of the ride was amazing. I would recommend it highly.

And since I shouldn’t have all the fun, I’ll throw out one of Herring’s emergency questions to you:

Would you rather be in Right Said Fred or ZZ Top?