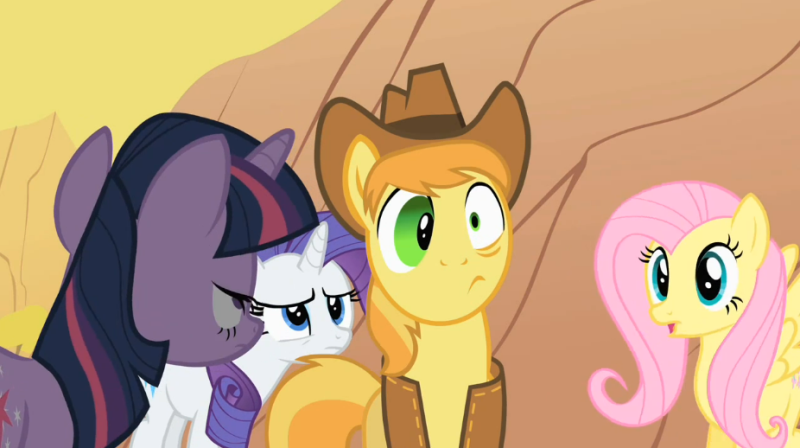 Tyger: The whole crew are on a train to the new frontier town of Appleloosa so that Applejack can give one her prized apple trees to her relatives.  After the sleeper car becomes an impromptu “slumber party” with some guests being grumpier than others, everyone beds down for the night.  They awake in the morning to find the train being attacked by a herd of Buffalo.  Rainbow Dash goes topside to confront one of the attackers but is unable to stop the them from detaching and stealing the last train car – with Spike and Applejack’s tree still inside.  They reach the town and Applejack informs her cousin Braeburn about what happened.  She in turn learns that the Buffalo have pressured the settlers to remove the trees they have planted from the land – and along with them, town’s food source.

Rainbow Dash and Pinkie Pie have both gone after the Buffalo to rescue Spike.  The herd find them first but before conflict occurs, Spike appears, makes introductions and diffuses the situation.  They are welcomed by the herd, treated to dinner and learn from the chief that the settlers have planted trees on the land the Buffaloes have claimed for generations, without their permission, and this is disrupting their yearly stampeding.  Stealing the tree from the train was meant to reinforce the message to vacate the land they took.  Rainbow Dash sympathizes with their position and returns to town to try to broker some sort of agreement.  However, the meeting escalates to an argument between she and Applejack, Pinkie Pie unsuccessfully tries to teach everyone a lesson about sharing in song, and an ultimatum is given: uproot the trees by tomorrow or they will be destroyed along with the town.

There is a full-on assault on the town the following day.  But when Chief Thunderhooves is hit by one of the apple pies the settlers are using as ammunition, a compromise is successfully brokered: the settlers can keep the land, a road for the stampede is created through the orchards, and the settlers share their tasty apple pies with the herd.  It is the dawn of a new era of cooperation and friendship.

Not surprisingly, this tale of Cowboys and Indians is the other controversial “race episode.”  However, unlike its counterpart “Bridle Gossip”, I just can’t defend this one.  In said sibling episode, some people were uncomfortable with the character of Zecora.  However, that episode was making commentary on racism, xenophobia and multiculturalism – so, a character like her is pivotal to such a story.  But “Over a Barrel” is what a friend of mine refers to a “The Tale of the Obvious Compromise.”  Since there are so many ways to tell that particular morality play, there is absolutely no reason to use one of the most tragic and shameful chapters of U.S. history as a backdrop to tell it.  Moreover, this is only made worse by the false equivocation that the settlers and the natives both had an equal and legitimate claim to the land.  I can’t see how either of these choices are defensible in any way.  I don’t object to the portrayal of the Indians as Buffalo – in a story mostly about animals with 4 hooves it’s a pretty obvious choice.  I didn’t find anything disrespectful about that.  However I have a huge fucking problem with the decision to tell this story with this backdrop – they simply should not have gone there.  Putting such a happy and tidy ending on it only makes it worse somehow.

The thing that boggles my mind is that this episode got made at all.  One aspect of the events that lead to the “creation” of the greatly loved background pony Derpy Hooves, was that the animation error that led to her fame had been caught by the production team before the show aired.  However, the episode had already gone through the final approval process with Hasbro.  They decided that getting sign off again was too much of a hassle, so they just let it air thinking that nobody would notice they error (which some 4channer did and the rest is history).  This leads me to the inevitable question: if the review process is so thorough that fixing a simple animation error is that burdensome, how is it that along the way nobody said “you know folks, this is potentially controversial subject matter, we might want to rethink this one.”

And this is all too bad, because in a “other than that Mrs. Lincoln, how was the play?” sort of way, there is really a lot to like about this episode.  Some of the gags like Rainbow Dash sneaking through the desert, or the Buffalo sharpening their horns using grindstones are straight out of the golden age of Warner Bros.  The banter is funny, Fluttershy expresses her desire to be a tree, and if you like hi-jinks to go with your ponies, this is great stuff.

But…none of that can overcome the really terrible judgement the writer and team made.  An important and classic little morality play, executed in pretty much the worst possible way.

Rev. Syung Myung Me: I pretty much concur — there’s a lot of great bits in this episode.  Pretty much everything in the first act is great; re-watching it, I was even beginning to doubt my memory that this episode was that bad.  And, well, as it goes, it just shows, well, yes, it IS that bad.  Between this and his one other episode, “Feeling Pinkie Keen”, it makes me think that Dave Polsky, the writer, is best suited for gags rather than full stories as they always end up problematic.  And, well, though the actual story itself is a bit better than “Feeling Pinkie Keen”, the backdrop completely ruins it.  Not just the false equivalency, but the way that genocide is reduced to a pie fight.  A PIE FIGHT.  Seriously.

That’s the crazy thing — there’s a really easy way to fix this episode and have it be otherwise the same, even keeping the Western backdrop.  Instead of doing a thing about Cowboys Versus Indians, make it a riff on the infamous Hatfields and McCoys.  The Tale of the Obvious Compromise comes through there just as easily, and the whole making-light-of-one-of-the-all-time-ugliest-bits-in-our-country’s-history thing gets sidestepped.  No problem.  But instead, you get this whitewashed thing where it turns out that the Indian stand-ins were Just As Wrong as the interlopers who showed up and started taking land.  The entire thing is so, so fraught, and yeah — it’s baffling that no one stepped in and said “Hey, folks, this one might be a bad idea.”

The fact that the Indian stand-ins are buffalo doesn’t bother me at all — they’re a hoofed animal and they’re also often linked with Indian culture.  If the episode had just had Indian characters without making it a creepy genocide allegory, there’d be no problem.  (That said: Given the backdrop of the episode, one can’t help but think about how the Cowboys did hunt the buffalo to near-extinction.  Just another unfortunate allegory, though obviously unintended by the crew.)  As an adult watching, it’s too hard to put that aside without thinking about, say, “Yep, basically, Braeburn’s gonna give Little Strongheart some blankets, yada yada yada, they get their orchard.”  A child is obviously going to miss this — but that doesn’t make it OK.  I don’t know if you necessarily need to set your six-year-old down and tell her about the Trail of Tears and that guy on the 20 dollar bill, but completely dismissing it isn’t the way to go, either — particularly when this isn’t a story or moral that NEEDS this particular backdrop to work.

One other thing that I didn’t like about this episode:  I thought Pinkie’s song was actually pretty good.  They were awfully mean to her!  And her dress was awesome!

Bridgeport Cat: Oh boy, THIS episode. When I went into watching it, I was actually more afraid of the episode falling into “Noble Savage” trappings that practically all children’s media portrayals of native peoples fall into. When an episode about magic ponies makes you yearn for the “Noble Savage” stereotype, you know you’re in for something terrible.

Everyone else has definitely covered why this episode is a steamy pile, but I’m going to disagree with the conclusion that the portrayal of native people as buffalo is inoffensive. This episode tries to equate (for some weird, weird reason) the hardships that fell upon those exercising manifest destiny with the cultural and literal genocide of the indigenous tribes. This is, of course, entirely ridiculous as anyone whose taken even a sideways glance at American History can tell you. However, part of the consequences from this historical American tragedy is that the buffalo, once a natural and abundant resource for the native people they relied on for their livelihood, was completely decimated.

Portraying the native Americans not just as rude landhogs, but as the very thing that the white man destroyed, is in no way OK. It feels like they’re rubbing salt into the wounds, like if after the Deepwater Horizon disaster BP portrayed the dead workers as whiny oil-soaked pelicans. I actually liked the way the buffalo were designed, which makes it almost feel worse because it’s such a waste of good character design. While the best solution would have been to not do an episode about the Native Americans at all, I would have preferred to see them portrayed as deer or any other hoofed animal instead of the one many now-extinct tribes held sacred.

There are many funny gags and really fun bits in this episode, but unlike other pieces of problematic entertainment you can’t strip away the fun from the really awful backdrop. It’s a shame, but I really can’t condone this episode in any way even if the Fluttershy “I would like to be a tree” line is one of my favorites. I often worry about over-analyzing children’s media, but the truth is we really should be careful what cultural norms we’re instilling into our children. The demonization of the Native Americans is not one we need to be doing, at all, and I don’t think it’s over-analysis to say this episode teaches kids a really bad lesson about American History. One thing I often praise to people who roll their eyes at bronies is that MLP:FIM is teaching a lot of girls important lessons about feminism most children’s media skips out on, but when this episode is brought up I can’t do anything but shrug my shoulders and say “Yeah OK, except for this one, holy COW!” While one literally racist episode out of an entire season isn’t as bad as the majority of other stuff found in kids’ entertainment, it’s still pretty bad.