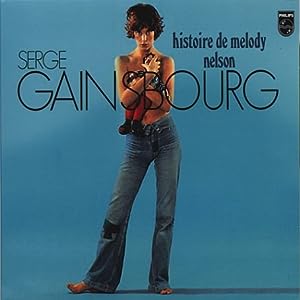 I’m going to have to pay more attention to Light In The Attic; they seem to be all over reissuing cool stuff. I was really pretty impressed with the Betty Davis records they found and released, and very recently they reissued Black Monk Time by the Monks, which is so dang good.

They’ve also reissued the initially-unpopular-but-influential Serge Gainsbourg record Histoire De Melody Nelson. I don’t know French, but I think this might mean “The History Of Melody Nelson“. Just a hunch, anyway. It’d make sense, as it’s a concept album (or even a mini-opera) telling the story of the unnamed narrator (though Gainsbourg referred to the narrator as himself in interivews) accidentally running over a teenaged girl with his car and then having a tryst with her. On the record, Melody is played by Gainsbourg’s lover, Jane Birkin (also seen on the cover in a wig and jeans and not much else) — though while Birkin was considerably younger than Gainsbourg, she was in her twenties.

The sound of the record is really ahead of its time as well as being OF its time — the arrangements by Jean-Claude Vannier are simultaneously sparse and lush. There is a lot of air in the tracks, and the bass sound is just amazing — punchy but clean; it’s one of the focal points, but it isn’t overpowering. The record is absolutely perfectly produced, arranged and recorded.

I’m not sure why it didn’t really do well on its first issue. The subject matter might be creepy, but given Gainsbourg’s history, it shouldn’t be entirely unexpected; even though this is far before Lemon Incest

, he’d also had hits with “Je t’aime… moi non plus” with Birkin and France Gall‘s “Les Sucettes“, which it may shock you to learn wasn’t JUST about lollipops.

Aside from being a great record, Light In The Attic do a great job with this release as well. There’re long liner note essays about the recording of it as well as full artwork — both vintage and newly made for this release. The essays make mention of other tracks recorded for this album that expand the story a bit; unfortunately there are no bonus tracks on the album — but it sounds like said tracks are pretty much destined to be locked in the vault forever… if they even exist beyond rumors. The lack of an audio bonus is made up for with the supplemental textual material — perhaps the only other thing I could think of that would have been nice to have is a DVD of the Melody Nelson TV film and other video material. Regardless (and one would assume those are also tied up with rights issues), this is an essential release, even if it leaves the listener wanting more. Perhaps Light In The Attic will soon reissue the followup by Vannier, L’ Enfant Assasin des Mouches

, a record which from the liner notes, sounds like it’s very much in the same vein — musically (though not thematically) a Melody Nelson Part Deux.