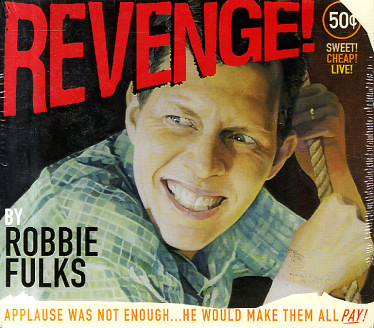 It might be bad form to open a record review by praising the album art rather than the music inside, but, well, most records don’t have album art as good as REVENGE! If I were to give an award for best sleeve of 2007, if REVENGE didn’t get it, it’d definitely be on the shortlist (after all, there’s still a little over half the year to go). This is remarkable, too, for an album that doesn’t have any liner notes to speak of or even a booklet. But what there IS is brilliant.

The front of the album depicts a painting (by Mike Fredrickson) of a crazed Robbie Fulks holding a rope in the style of the old 1950s Pulp Fiction book covers. The album title features prominently, and the tagline running across the bottom reads “Applause was not enough… He would make them all PAY!” This is hilarious enough, however, the back cover completes the package. In a similar style is a half-full audience milling around before the show starts, some chatting, others looking at the empty-but-for-equipment stage. It takes about a beat to notice the piano suspended by a rope hanging over the audience, with the rope leading to a mysterious, suspicious shadow emanating from backstage.

This album is worth buying just for the exquisite album art. In fact, I’m thinking of finding out whether or not Yep Roc released this double album on vinyl as well (sadly, no, it doesn’t appear they have), just for the artwork made EXTRA LARGE. Luckily, however, the music is very good too — mainly because buying a record just for the sleeve art is a little weird and silly.

The album opens with a studio track — the only one on the album — the hilarious “We’re On The Road”, which explains the genesis of the album. After the “critical triumph” Georgia Hard

, Yep Roc hadn’t had a new record in quite some time, and they needed one cheap and fast. So, there you go. Later on the record, Robbie mentions that he wanted to write some new songs since Live Records were typically a rip-off, consisting of old songs, poorly recorded. Luckily, while there are old songs on here, they’re actually recorded rather well. And there are some new ones on there, too — including the one he was talking about, “I Like Being Left Alone”, about, well, the joys of being left alone. As such, I found that song pretty dang relatable.

Other highlights are the outstanding “Mad At A Girl”, “Cigarette State”, the rave-up of “Busy Not Crying”, the slow and pretty “You Don’t Mean It” (not the Minus 5 song), and his cover of “Believe” by Cher. (I’ve heard this one being described as misguided — I find that confusing as perhaps the only thing I can find misguided about it is that they bothered giving it to Cher — Robbie turns it into a perfect, straight-forward country song.) Like David Byrne‘s cover of “I Just Wanna Dance With Somebody (Who Loves Me)”, it’s surprising how the song transforms into a GOOD song in the hands of someone talented. I mean, it IS pretty hard to separate Cher’s version with the warbling parody of the song that appeared on South Park. (…that WASN’T the real one, was it?)

The album also has a few spoken tracks of banter between the songs — and like the rest of the album, these are done right as well. Not only are they amusing stories, but they’re also indexed on their own tracks, so you don’t have to listen to them every time you listen to the songs. After all, even the most hilarious story can lose a little something the one-hundreth time you hear it — allowing the listener to skip it without missing out on a great song is a definite boon to the relistenability of any live record. So thanks, Yep Roc!

The album is split into two discs — “Standing”, featuring a full band version of typically up-tempo songs, and “Sitting”, featuring an acoustic show of softer stuff. Usually, there’s a clear winner on these types of things but on this set, both CDs are perfect. “Standing” has a lot of energy and power that makes you want to move, while “Sitting” is much more intimate and laid-back (with a bit more on the amusing story/banter side which really draws the listener in). In that sense, “Sitting” is the better live album, if live albums are supposed to make you feel like you’re really there at the show. But to call it “better” seems like slighting the other disc — perhaps it is better to say that both discs excel in different ways.

Strangely enough, I brought the album to my mother to listen to, and while she agreed with me about the album art, she said that the actual music was “everything [she didn’t] like about music”. Which was very odd, to me, as I thought that not only would the record be right up her alley, but, to me, it’s Country Music Done Right. So, I suppose if you’re my mother, you shouldn’t get this record. But if you’re not, you’ll probably like it. And hey, at least if you don’t, we can all agree on the sleeve art. (But I’ll still find it kinda weird if you don’t like listening to it.)