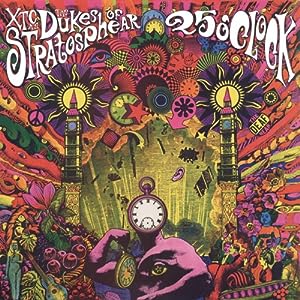 I have to say, of bands that don’t actually exist, the Dukes of Stratosphear are probably my favorite. Particularly since they found a way of actually releasing a couple of records in spite of that handicap. In fact, the new reissues on Ape House represent probably the third or fourth time I’ve bought them — CD, Vinyl and now CD again. The original CD issue — the two-on-one disc Chips from the Chocolate Fireball

— was pretty good, though it didn’t have any of the original artwork or anything available, looking basically like a generic best-of release. These discs, however, feature the original art from the vinyl releases of the two records along with remastered audio, bonus tracks and demos and liner notes from, for some reason, those guys in XTC.

Actually — if there is anything wrong with these reissues is that the cover art lets everyone in on the joke — they’re the very first releases with XTC’s name on the cover — “XTC as the Dukes of Stratosphear”. Admittedly, by this point, everyone knows already, but still. While the liners are upfront about the true identities of the members and the titles of the records made before and after, at least they ARE credited to Sir John Johns, The Red Curtain and Lord Cornelius Plum rather than Andy Partridge, Colin Moulding and Dave Gregory. Sir John Johns provides overall notes and song-by-song liners, while Lord Plum goes into great detail on the gear used (as is typically his want) — while the Red Curtain more or less remains relatively mysterious, giving only a page or two in each record just of general thoughts.

The bonus tracks on 25 O’Clock include some lost Dukes songs, like “Nicely Nicely Jane” and “Susan Revolving”, as well as some more recent ones (apparently they’d briefly recovered from that fatal falafel-related kitchen accident that felled them) — “Open A Can of Human Beans” for an MS charity record, and a couple of Sir John Johns solo cuts recorded for other projects. Psonic Psunspot‘s bonus tracks are all demos (including a couple that appeared on the Fuzzy Warbles

set), but they’re all quite interesting besides. The only track I can think of that’s missing is It’s Snowing Angels, which I thought was a Dukes track officially, but I could be mis-remembering.

The long-lost-panto-XTC followup was to be a Bubblegum Music album. A few cuts released like “Candymine” and “Standing In For Joe” make me wish that had been completed; the XTC records are all pretty much uniformly great, but when they’re dressing up as other folks, they seem to have more fun — be it as The Colonel, Mr. Partridge, The Three Wise Men or, of course, the pinnacle of the FakesTC, The Dukes themselves. I’ve heard that Andy’s gotten sick of songwriting of late — perhaps, though, one of the other selves that lives in his brain might want a turn at the helm soon. The world can always use more Andy Partridge music… and, hey, why not more Andy Patridges as well?