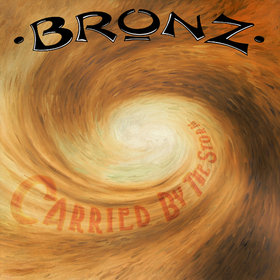 Bronz is one of those bands that never got the recognition it deserved. It was formed in the late ’70s as part of the British New Wave Heavy Metal sound, though its members referred to it themselves as “light arena rock.” The band’s debut album, Taken by Storm

, was a powerhouse collection that featured Max Bacon on vocals and seemed ready to take the world by storm. Alas, stiff competition and inadequate marketing led to lower-than-expected sales, and an overly stressful U.S. tour led to Bacon departing (eventually forming GTR with Steve Hackett and Steve Howe), with the rest of the band following suit soon after. Bronz then regrouped with bassist Paul Webb on vocals and began touring consistently, releasing live albums every so often, but no new studio albums. It seemed there was to be no official follow-up aside from an eventual CD collection of previously-unreleased works called Unfinished Business

However, Bronz has bounced back, coming out of the studio with a strong new collection of music. Carried By The Storm, released just this month, presents the band in fine form with a great list of songs. From the catchy, melodic opening rocker “Can’t Live Without Your Love,” to the memorable closer “Figure In The Dark,” Carried By The Storm proves that a truly good band can’t be kept back forever. The album includes a nice mix of guitars, keyboards and even a saxophone, which gives slower numbers like “You and Me?” a certain charm.

The lineup, which now features the talented Ian Baker as lead vocalist, is energetic and manages to produce a sound both fresh and nostalgic at the same time. The songs have that familiar ’80s sort of flavor that Bronz fans would expect, but they don’t completely sound like songs that were lying around unrecorded for twenty years; there is a feeling of newness to them that shows the band has progressed and not stagnated. Founding member Shaun Kirkpatrick remains as the group’s guitarist and his playing is as spirited and polished as ever. The album has eleven tracks total, but it flies by; the material is never boring and leaves the listener wanting more.

As the digital age is here, the album is not available on CD but is instead a direct digital download in the form of individual mp3s. This is probably the best way to go as it means less cost for the band and its label and instant access without the need for shipping for the consumer. This, plus the strong tunes the album comprises, means a purchase in which everyone wins. Bronz, it’s good to have you back again.