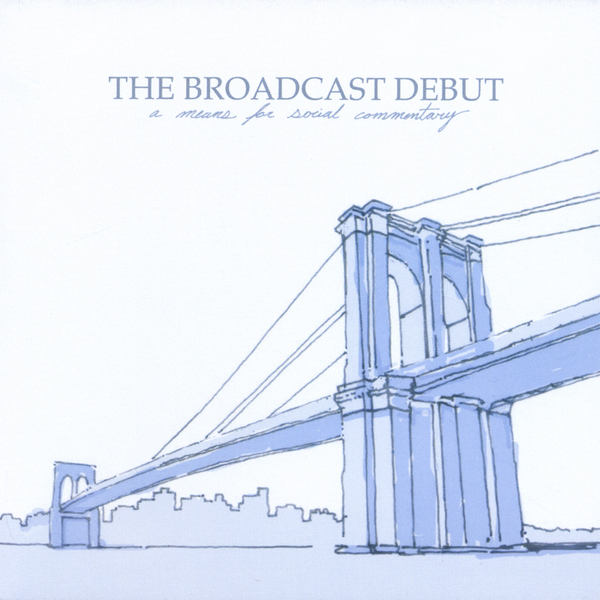 A while ago, Steve of Steve.FM loaned me a CD he got sent to him, A Means For Social Commentary by The Broadcast Debut. It’s produced by Jon Auer from the Posies, and it’s got a somewhat similar sound (though without being derivative). It’s only an EP, but I think it’s definitely worth checking out.

The opening track, “Brooklyn Bridge” is a pretty, piano-driven melody with a wistful sound. In a way, it kind of reminds me of the superb “That Don’t Fly” from the Posies’ most recent album Every Kind of Light, or perhaps a more traditionally-pop-rock-arranged Sufjan Stevens. The vocals are very nice, and it’s just generally a great song.

The next song, “Stars”, is a more straight-forward rock song. The hook on the song is great. It’s still pretty mellow, so if you’re wanting something to just thrash around to, put on POLYSICS instead. But if you’re in the mood for just some cool, straightforward pop-rock, check this out.

I enjoy “The Broadcast Debut”, not just because it’s a cool song, but because it lets The Broadcast Debut into that elite group of bands like Bad Company, They Might Be Giants, Big Country and Colourfield that have a song with the same name as the band. If only the EP were self-titled, it’d be perfect! (Though, as titles go, A Means For Social Commentary is pretty good, and, well, self-titling a record always struck me as a bit of a cop-out, anyway.)

“Rollerskating” is another really strong track — the first time I listened to this EP, it immediately stood out as my favorite, and it still pops out every time I listen to it. It’s a song that just says “Hey! Listen to me! I’m rad! Check this out!” and, well, you want songs to do that. At least I do. I guess I shouldn’t generalize. Maybe someone out there is wishing for more mediocre songs in the world so they’re not distracted by quality.

If there is a problem with this EP, it does seem that the songs all seem to have a similar tempo and general sound. The individual songs are all very strong, but as a whole, it does tend to wear slightly. In this sense, it’s best for the radio or the shuffle command on your favorite mp3 player. “The Broadcast Debut” comes about the closest to rocking out, but where you’re expecting it to do the quietLOUDquiet thing, it goes quietLOquieterlessquiet. Which, as I said, works well individually in the song, but I just wish there was a little more to shake up the song-sequence. Of course, it’s only 20 minutes long, so you can’t get too bored or anything. And it’s not like there’s a clunker song on here – “Pen & Ink” might come the closest, but it’s still a quality song, it just doesn’t really stick out between “Stars” and “The Broadcast Debut” — but I think that’s less an indictment of “Pen & Ink”, and more a testament to the strength of the other two songs.