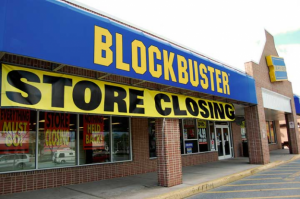 When I was a kid in the early ’80s, home video was still a relatively new invention. I remember getting our first VCR and going to the video rental store – the stores had a huge influence on me and can be blamed or praised for my love of movie posters and decorating aesthetic of plastering every empty surface with movie posters.

My strongest memories are of Yucaipa Center Video, which was next door to the Pizza Chalet. So a good weekend would include a trip to pick up some pizzas and rent a few videos. I still remember when YCV shut down during my senior year of high school – in anticipation of the new Hollywood Video opening across the street (incidentally in the former-bank building that had also formerly been my dad’s law office). There was another video store in town that had $1 rentals on Mondays, and I remember we used to rent the same movies over and over again (especially NEWSIES, SHIPWRECKED, and WILD HEARTS CAN’T BE BROKEN). There was also Calimesa Tower Video which was walking distance from my best friends house and I think is now a clothing store. We rented every Pauly Shore movie as it came out.

In college, I found a local video rental shop, Westside Video, which had a 5 videos for 5 days for $5 deal (and every 5x’s you did it, you’d get a free rental – best deal EVER). They had so many posters that the ceiling was covered. I rented hundreds of movies from Westside over my four years in Santa Cruz. What I really loved about Westside was its fun system of organizing the movies. There were sections for Action, Drama, Comedy, and Kids movies, but there were also sections like the Horror movies in a walk-in closet space, Just Plain Weird, and more. This prepared me for what I consider to be the greatest video rental store that ever was: Reel Video in Berkeley.

Reel was owned by Hollywood Video, so they’ve since shut down, but when it was open, it was amazing. It had so many sections (shelves for Werewolf, Zombie, Killer Kids, Wrestler-turned-Actor movies, Sports-Related Drama, Coming-of-Age, and the best section: So Bad It’s Half-Off, to name only a few), and they’d even have multiple copies of movies and shelve them in different sections if they crossed genre lines. Rental prices were steep there, but it didn’t matter because you could find anything. The one time I asked for a movie and was told they didn’t have it, I ended up finding it later (in the So Bad It’s Half Off section).

My first job out of college was working at the local Blockbuster Video store. I was one of a staff of nine, and I’m pretty sure everyone I worked with was younger than me. Most of them went to school with my younger brother. I don’t tend to go on about my brief stint at Blockbuster very often. This is for several reasons, chief amongst them being that I was only working there for about three months: from the end of January 2005 to the middle of April 2005. I made $7.15/hour and I usually worked around 20 hours a week. The major benefit of working there, though, was that I got 5 free rentals a week, and we usually got new releases in a week before they hit the shelves, so we could rent new movies before they were officially available.

But working at Blockbuster was a valuable experience and I don’t regret doing it. I had been unemployed for six months before that, and I went into the interview with a forced jocularity because I knew that if I couldn’t get a job at Blockbuster, I might as well throw in the towel. Thankfully, I got the job and spent the next three months asking people ‘What can I help you find?’ and listening to crazy men rant about movies (I once spent 15 minutes under verbal assault by a man who felt compelled to explain to me why K-19: THE WIDOWMAKER and SEABISCUIT were the greatest movies ever made. Newsflash: They are not.) and helping people find movies to rent based on other movies they’d previously enjoyed (‘Oh, you liked TROY? I bet you’d just love KING ARTHUR!’).

One of the more disturbing revelations that I had while working at Blockbuster is that people would come in to rent movies and not give a shit about what they were actually renting, so long as it was a new release that had JUST come out. I remember a woman screaming at me while gesturing at the New Release wall, demanding ‘Is this the NEW stuff? Where are the NEW movies? Is this NEW?’ and the day that MEET THE FOCKERS was released, only one person who came in that day did NOT rent it.

I want to see every movie. I know this is an unreasonable goal, really, and I’ve accepted that I will never see every movie, but I also have a good idea of what I like when it comes to movies. The fact that people will use movie watching as just another way to one-up their friends is disturbing to me. There was a brigade of soccer mom types who would come in with their movie passes, and they all wanted the same movies – usually movies that we only had about five copies of – and they would hound the store until the movie was available. The most notable was a piece of shit called SUSPECT ZERO. Women would bustle into the store and yell at the counter ‘YA GOT ANY SUSPECT ZERO?’ and, if we didn’t, they would get super butthurt. Once when we got a copy in, the manager called a woman who was a regular and had wanted it, and the woman literally answered the phone by yelling ‘YA GOT ANY SUSPECT ZERO?’

And today there is no Blockbuster (well, maybe there is somewhere, but the location where I used to work is gone, and eventually they’ll all be gone). There is no Hollywood. There are hardly any independent movie rental stores. There is RedBox and there is Netflix. And, even though I hold a huge amount of love and affection for video stores, I am totally OK with this. I do believe that if you have a video store nearby, that it’s worthwhile to rent back catalogue titles there, and it would be great if you could take your kids there and give them the gift of experiencing something that will soon be gone from our lives completely. I have a membership at my own local rental shop – Silverscreen Video. I was able to rent two out of print titles from them that I couldn’t see otherwise (TRUCK TURNER and BOXING HELENA). You know, unless I like torrented them or something.

But I don’t go there anymore, because where I work now they have a large DVD lending library. It’s not so much like a video store as it is like having a friend with a really huge DVD collection that I can borrow from.

I am a fan of both Netflix (which I have been using, one way or another, since 2002) and RedBox. RedBox is brilliant, because I can rent 5 movies for less than the cost of seeing even one of them in the theater. And I’m a huge fan of seeing movies in the theater, but some movies suck ass and I don’t want to spend my hard earned money seeing them in the theater, when I could wait a few months and get them for about $1 at the RedBox.

Modern technology is constantly changing our lives. If you’d told me, when Yucaipa Center Video closed and Hollywood Video moved in across the street, that within ten years or so Hollywood Video would be tanking, I would not have believed you. I never looked further ahead than I had to. Now, I can see that while the death of physical media for movies is not necessarily hovering around the corner, it is approaching. We’re heading toward a world of digital copies only. That’s the way of the future. I think it’s a long way off, but it’s coming.

And RedBox and Netflix are the way of the future. And I embrace them.