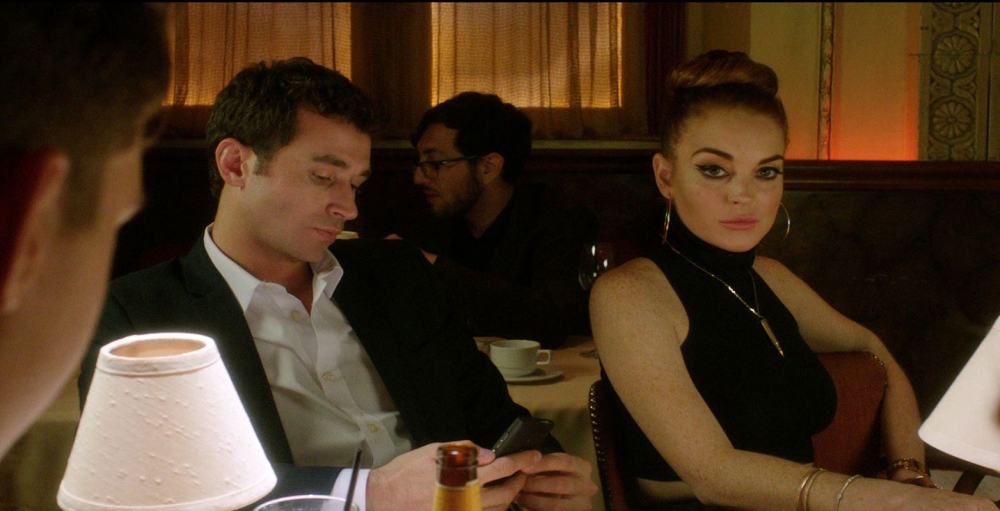 When I was waiting to get into the Roxie Theater in San Francisco last Friday night, some people got into line behind me and immediately began chatting idiotically about how terrible the movie was going to be. “This is going to be terrible,” one of them said. I detest the mindset of people going to see movies simply because they are ‘bad’. This kind of mindset makes no allowance for the movie to not suck. It’s like the person watching is so invested in the movie being a piece of shit that they take offense if the movie dares to NOT be a piece of shit. I’m all for enjoying a hilariously inept movie, but The Canyons is actually a beautiful and brilliant film.

Yes, that’s right. All the negative reviews I’ve read have all missed the point. The reviewers quite obviously don’t understand Bret Easton Ellis’ writing or Paul Schrader’s direction. They don’t get the performances. They missed the point. That’s too bad for them, really, because they’re missing out on a fucking brilliant piece of filmmaking. They are so invested in this being a horrible movie, they are so excited to use all this high-fallutin’ language to shit-talk Lindsay Lohan, that they don’t dare back down and admit that the movie is amazing.

First of all, the movie is beautifully shot – the colors, the shots, the composition, the music – it all comes together to paint a gorgeous portrait of a Los Angeles that is at once a wasteland of commerce (the derelict movie theaters) and a wasteland of humanity (the characters). The broken down movie theaters are a recurring image used throughout the movie and to great effect (most negative reviewers seem to take offense and enjoy being greatly confused or insulted by these shots). They fit in well with the disconnected people who are still going through the motions of trying to make movies. The movie opens on a dinner scene in a restaurant – Christian and his girlfriend Tara are having dinner. Christian can barely keep his eyes from his phone as he pulls up pictures and sends texts. Typical Hollywood. Or typical first world problems.

People are so hung up on Lohan’s performance and the nude scenes that no one seems to have noticed James Deen’s performance (except to criticize it in an offhand manner). I don’t know his work in the porn world, but I can absolutely see why Bret Easton Ellis wanted him to play Christian. His performance is straight out of an Ellis novel. It is pitch fucking perfect. Lindsay Lohan gives a wonderful turn as Tara, yes, but Deen steals the movie from her. The movie is actually about Christian and Ryan, Tara is more of a commodity than a person. This is pure Ellis. At least one review has called moments of the movie homophobic. Again, they are obviously not familiar with either Ellis or his work. (Read a fucking book.)

Another tired line of bitching in reviews is about the acting. I find that people who complain about ‘stale’ or ‘mediocre’ or ‘bad’ acting have never actually seen a movie that truly contains bad acting and do not actually understand what bad acting is. The fact is that, though there are a few lines throughout the movie that could have been delivered better, try watching Hard Ticket To Hawaii and then tell me that the people in The Canyons cannot act. I dare your pretentious ass. I fucking double dare it. Lindsay Lohan is a lot of things, James Deen is a lot of things. In this movie, they are both acting and they are doing it well and they are doing it better than you think they are.

Of course, then there’s taste. I get the feeling that many people just didn’t personally care for the movie and allowed that to guide their dim-witted reviews. You don’t have to love the movie – I loved the movie, yes, but even if I had not, there is no denying that, given the budget, The Canyons has no right to look as fucking awesome as it does. This movie is not for everyone, it lacks mainstream appeal, but that does not make it bad. It’s actually a very smart movie but in a very obtuse Ellis kind of way and if you allow for that, it’s not as bad as you think it is. I recommend watching it again. (Maybe after having that stick removed from your ass.)