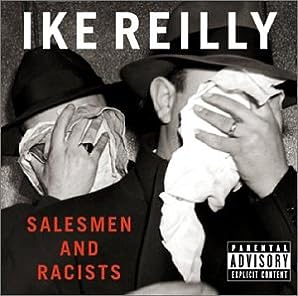 Ike Reilly‘s a tremendously talented singer and songwriter.  I first became aware of his talent when I got Cracker‘s great Countrysides record — my favorite track, by far was “Duty Free” — when I read the liners, I realized I had to check this Ike Reilly guy out, so I picked up his first record, Salesmen & Racists, almost immediately — and wasn’t let down (though I was confused by how “Duty Free” seemed to have a whole new set of lyrics, but more on that later).  Ike’s new record is the outstanding Hard Luck Stories, which just came out on CD last February.  Kittysneezes is lucky to have Ike sit down with us and talk about his new album, comedy, and the middle name “Ray”.

Ike Reilly: “Who Loves You Now” by Brendan O’Shea.

Ike Reilly: I only listen to very popular bands.

Ike Reilly: My smashed guitar. It fell victim to a marital dispute.

Ike Reilly: It’s a toss-up between 5 pairs of bolt cutters and a creek bed.

Ike Reilly: I don’t even know what you mean. Visual artist? Like Carrot Top? That must be what you mean, right? I assume it is. I’m sure that’s what you mean so I will say…Gallagher.

Ike Reilly: Tough one. Today they are Hot Rods to Hell, Unforgiven and On the Waterfront.

Ike Reilly: Yes. I own many pieces of shit made by the artist Mickey Reilly. His output is huge and consequently the quality isn’t so good. I’m hoping when he advances into third grade I will see an improvement in his vision and then hopefully an increase in the value of his work. However, right now the original artwork by Mickey Reilly is pretty shitty. I will continue to display it anyway.

Ike Reilly: A Confederacy of Dunces, East of Eden, Cannery Row, The Grapes of Wrath… Oh yeah, a picture book I just saw at the airport called Awkward Family Photos. You really don’t read it, you just look at the pictures.

Ike Reilly: I don’t want to answer that question when I’m so excited about talking about myself to you in this compelling interview.

Ike Reilly: I have had that opportunity many times and failed each time. I guess I like the name Slick or Roger. I also like the name Ray or Raymond as a middle name. My father’s middle name is Raymond. If you give anyone the middle name Ray, it makes them sound immediately like a criminal, assassin, or hillbilly. Try it. George Ray Bush. Michael Ray Jordan. Ike Ray Reilly. Shooter Ray Jennings. Joe Ray Biden. Joan Ray Rivers. Paris Ray Hilton… Maybe not everyone. It works better with two syllables in the first name.

KS: Why’s Hard Luck Stories not credited to the Assassination?

KS: You’ve made some appearances at Improv clubs and humor has always played a role in your music — what type of comedy speaks to you?

Ike Reilly: The funny kind. Dark, light, physical, mental. Mostly I like comedic situations that have to do with lay-abouts.

KS: What draws you to the podcast form?

Ike Reilly: Money and the lack of money.

Ike Reilly: Lorne Greene’s “Bonanza“. It’s an amazing record. Gonna play it on my next podcast.

KS: What did you think of Cracker’s new lyrics for their cover of “Duty Free”?

Ike Reilly: Those are my lyrics so I think they are great. Your confusion is rooted in the fact that that recording my friends in Cracker made is based off my demo of the song and it is almost note for note like my demo but they played the notes and sung the words a lot better.

KS: How’d you come to work with Shooter Jennings?

Ike Reilly: I usually took a cab but sometimes I had a rental car and one time Tom Morello drove me. Ya see, Tom introduced Shooter and me and he wanted to visit us in the studio so he picked me up and drove me there. I think one other time I walked… if I’m not mistaken.

KS: If you could work with anyone in the world, living or dead, who would it be?

KS: Do you have any other upcoming projects you’d like to mention?

Ike Reilly: Videos being finished as we speak and a TV show. Another record and some sonnets about the sea and fish.