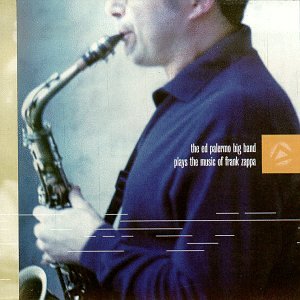 It’s no secret that I’m a huge, obessive Frank Zappa fan (not that, in my experience, there’s any other kind of Zappa fan). Back around ‘98 or ‘99 I discovered Ed Palermo’s album The Ed Palermo Big Band Plays the Music of Frank Zappa at a Tower Records; I looked at the back and not only did it sound interesting besides (interpretations of the master’s music is always fun), but it had a version of “We Are Not Alone” and “Sofa No. 1”, a couple of my all-time favorite Zappa titles.  The purchase wasn’t exactly a hard decision; as soon as I got home from the record store I listened to it and was blown away that the CD was even better than I thought it would be.  That album is, unfortunately, out of print, but Ed Palermo’s got two other amazing albums of Frank Zappa’s compositions out, 2006’s Take Your Clothes off When You Dance and the brand new Eddy Loves Frank, which, in addition to 7 Zappa songs (including “Night School” and “Dupree’s Paradise”), has a beautiful new arrangement of “America The Beautiful”.  As it turns out, Ed Palermo’s not only a phenomenal arranger, player and composer, but a super-nice guy who agreed to an interview.

Ed Palermo: “Exit Music (For A Film)“ by Radiohead, but I am totally loving Brad Mehldau‘s version that’s in one of my favorite movies, Unfaithful. PERFECT placement of a song for this particular scene.

Ed Palermo: There’s a ton of unknown artists that I could name. Band? Gary Morgan’s Panamericana is the best.  They’re a New York big band. And Gary’s one of the best arrangers and composers. Single artist? Bruce McDaniel who happens to be in my band and is also my producer. Check out his song, “It’s A Wonderful Life” with his band Nine Men’s Morris.

Ed Palermo: A picture of me and James Brown. I did some arranging for him a few months before he died.

Ed Palermo: A song that I wrote in my 20’s called “Yet Another Insult”. It will hopefully be on my next CD, which will be a double CD — one disc Zappa, the other disc my originals.

Ed Palermo:  Napoleon Murphy Brock. He used to sing with Zappa and occasionally sings with us. AMAZING performer. The best!

Ed Palermo:  The Hurt Locker is the only recent one I’ve seen.

Ed Palermo: Yes, my sister-in-law, Nancy Palermo. A GREAT artist who does my CD covers. Just brilliant. I have some of her painting in my house.

Ed Palermo: I love the album you did called Remain in Light. I used to listen to it constantly and influenced me greatly. A few of my friends have played in your bands.

Ed Palermo: I really never read, so five is pushing it. I really loved Ken’s Guide to the Bible. I liked Bird Lives about Charley Parker.

Ed Palermo: Sometimes when I play corporate parties, we have to do, “Unchained Melody”, a song I abhor. That 3 minutes seems like an eternity.

Ed Palermo:  “Nostalgia” is a beautiful word and for me works as a name but I’m afraid the kid would grow up sullen and unhappy.

Ed Palermo: The fact that the next catastrophe is right around the corner, so enjoy the moment!

KS: I know 200 Motels is one of the more divisive albums (as is the Flo & Eddie era, even) — what is it about the album that makes you rate it as your favorite?  Do you enjoy the film as well?

Ed Palermo: I didn’t like the movie. It didn’t make sense to me. I just watched it again recently to see if my mind has changed. It hasn’t. The reason I like the soundtrack is the orchestral pieces. It has some of the most beautiful and soulful pieces Frank wrote in my view. Those pieces went over my head when I first heard the music back in ’71 or ’72. Back then (when I was in high school) I liked Hot Rats, Uncle Meat and Burnt Weeny Sandwich the most. And Lumpy Gravy!But years of listening to classical music opened up my ears so now the music of 200 Motels hits me really hard now.

KS: Is there any pieces by Frank that you’d like to perform but haven’t been able to get to work?

Ed Palermo:  “Amnerika”. And I’d like to arrange the piano intro to “Little House I Used To Live In” for my band like I did for Zappa’s “Sleep Dirt”. I just don’t have the time.

KS: What other contemporary composers do you put in the same league as Frank?

Ed Palermo: Mike Keneally is the only one who comes close. I sure don’t.

KS: If you could put together a dream version of the Mothers with all the various Zappa alums, what would it look like?

KS: How did you get in touch with Candy Zappa and how did she come to perform with you?

Ed Palermo:  Nigey Lennon was the hook-up there. I befriended a great talent by the name of John Tabacco who works a lot with Nigey, who  is a really talented songwriter. Nigey used to live in LA and used to date Zappa and even wrote a book about it called Being Frank: My Time With Frank Zappa. Nigey and Candy are very close friends. My band was playing regularly at NY’s Bottom Line nightclub, so Candy flew in, did a rehearsal and did a couple shows with us. I love Candy’s voice!

KS: Will your albums Papier Mache and Ping Pong ever be reissued? I only recently found out about these, and I’d love to hear them, having dug “Wai,Fn?” from the first Zappa album.  Do you have another album of your own compositions in the works?

Ed Palermo:  I burnt Papier Mache onto CD from an actual LP, so you hear the occasional pop. Actually, that was my first recording with my band, done in 1982. The original title was Ed Palermo. There’s a song on there called “Papier Mache”, so I retitled it as that when I transferred it to CD. I sometimes sell it on gigs or give it away if someone buys all 3 of my Zappa CDs.

Ping Pong was my second recording, done in 1987. It has some nice stuff on it but isn’t nearly as creative as my first album. If someone asks me to sell them either of those early CDs, I oblige but there isn’t a huge demand for them at this point.

KS: I read that you also teach music at Hoff-Barthelson; what are your classes like?

Ed Palermo: I love it. I love the school, I love my boss and I love the kids. It’s an after-school program that isn’t part of the public school system, so none of these kids are forced to partake. I teach private lessons (sax, clarinet, guitar and electric bass), a couple theory classes, an arranging class and 4 ensembles. I like my classes to be fun so I keep it light.

KS: You’ve performed with a lot of different artists; what’s your favorite memory from that part of your career?

Ed Palermo: When I did my first album, working with Edgar Winter was an UNBELIEVABLE experience. I really felt I was in the presence of a rare type of musical genius.

KS: What’s the hardest song you’ve had to transcribe?

Ed Palermo: The hardest would probably be “For Calvin” from The Grand Wazoo album. It’s arranged really dense, so to pick out the notes was a bitch. My version isn’t nearly as thick.

KS: If you could play with anyone, living or dead — who would it be?

KS: Other than Frank, is there someone else you’d like to play with living or dead?

KS: How are your albums typically recorded?

KS: You’ve gone on record as being against how horn samples sound — I definitely agree, but why is it that horn samples seem to suck so bad, worse than other sampled instruments?

Ed Palermo: My producer Bruce could answer that. I’m a technological moron.

KS: From a normal guy (well, normal guy who plays real good) point of view, what is it about the sound that just seems to sour in the ear?

KS: Is there anything else you’d like to mention?

Ed Palermo: The fact that the next catastrophe is right around the corner, so enjoy the hot dogs and beans.