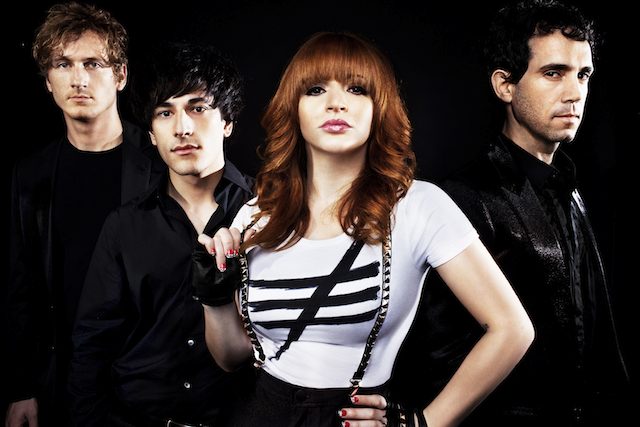 Morningwood first hit the scene on a national level with the insanely catchy single “Nth Degree“, with the “M-O, M-O-R, M-O-R-N-I-N-G-W-O-O-D” hook and great video featuring different record sleeves.  After their first, self-titled album for Capitol Records, they left the label and have recently put out the great followup Diamonds & Studs through a partnership with VH1.  Chantal Claret Euringer is the voice of the band and also the director of two of Morningwood’s videos, “Take Off Your Clothes” and the brand new “Snobby Little Elf“.  And, with her husband, James Euringer from Mindless Self Indulgence (themselves no strangers to great music videos), Chantal runs the Tour Crush clothing line.  If it weren’t obvious, she’s pretty busy, so I was very glad she was able to do an interview for Kittysneezes, particularly since I’m a big Morningwood fan.
Part the First

Chantal Claret Euringer: Aghh top 5’s are impossible… State by State With the State, The Philosophy of Andy Warhol: From A to B and Back Again by Andy Warhol, Invisible Man by Ralph Ellison, The Tipping Point and all of the Charlaine Harris Sookie Stackhousebooks.KS: What is the most boring thing you’ve ever experienced?
Chantal Claret Euringer: OMG, I have had way too many boring experiences. I used to fall asleep in class all the time.
Part the Second

KS: What was it like working with Gil Norton on the first record and Junior Sanchez on Diamonds & Studs? How was it going from a producer who was more known for rock stuff like Pixies, to a producer more known for dance music?

Chantal Claret Euringer: It was a very different experience not just because of their genres of music but just in the way they work.  Gil was really a master at handling everyone’s personality and getting what he needed out of everyone, if he needed to be sweet with one person he would be if he needed to be harder with someone else he would be.  That is really I think what a great producer’s greatest talent is.
Junior was great for a different reason, he added some really quirky electronic suggestions to our songs which helped and worked really hard.  He is a great friend.

KS: Morningwood’s always had great videos — do the concepts typically come from inside the band, or more from the directors (or, rather, the videos you don’t do!)?

Chantal Claret Euringer: We have made all our past videos with one guy Adam Neustadter, we always work together to come up with concepts.  That is why I loved to work with him, I knew if I had an idea or we came up with something together he could bring it to fruition.KS: Which is your favorite Morningwood video?  What about your favorite music video by anyone?
Chantal Claret Euringer: I am going to have to say “Snobby Little Elf” because I made it and I think it came out great and it is EXACTLY what I was picturing and that is always incredible when you can make something exactly the way you want it.
My favorite music video of all time, I am going to have to say


A Hard Day’s Nightbecause basically that is a 2 hour music video. It looks amazing and is so fun.KS: The “Snobby Little Elf” video was great; do you have any interest or plans on doing more stop-motion animation?
Chantal Claret Euringer: Yes! I would love to do more stop animation, it is very time consuming so I am pretty picky about what I do, but it was so much fun and satifying to do.KS: How did the “Nth Degree” video come about?  Of the various record sleeves in the video, do you have a favorite?
Chantal Claret Euringer: That was Adam’s initial concept and then we decided what different record covers we would mimic, we have really similar taste in music so we agreed on French 60’s and New Wave and Punk and what not.  I would have to say that the rollerskating disco cover was my favorite, I still have my gold rollerskates.  I can’t wear them though because sparkles get everywhere when I take them out of the box.KS: How did the Tour Crush line get started?
Chantal Claret Euringer: I was thinking about all of these accessories and clothes that I wanted that I couldn’t have and I decided the best way to get them was to make them and I figured if I wanted them then someone else might too.  James and I always pow wow on everything and he was helping me and I thought it would be lovely if we could work together on something.KS: What’s the biggest surprise in your record collection?
Chantal Claret Euringer: I am a huge fan of 90’s hiphop and R&B, it’s what I grew up listening to also I am a gigantic Disney music fan, old school shizzy, not new school.KS: If you could work with anyone in the world on a record, living or dead, who would it be?
Chantal Claret Euringer: Beyonce, Bette Midler, or Lemmy from Motörhead.KS: Will there ever be a CHANTAL makes ROBOTS!! album?
Chantal Claret Euringer: It’s always possible.KS: Since you’ve got a film background, who is your biggest influence in that realm?
Chantal Claret Euringer: I would say Richard Lester, Terry Gilliam, Peter Jackson, Roman Polanski, Ray Harryhausen, etc…KS: Would you ever be interested in doing a feature?  Perhaps something like a Morningwood Hard Day’s Night kind of thing?
Chantal Claret Euringer: Of course, I don’t know if it would be a Morningwood feature but I love anything movie-related and would do anything with it.