Skip to content
I Want My Bike Back!
ShareTweet 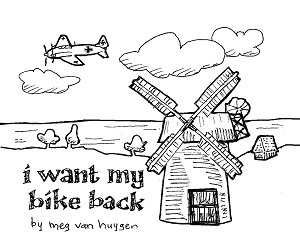 My main MAD era was age 6 through 11 or so, so during the mid-’80s and very early ’90s. Probably half of the content sailed over my head, due in no small part to the whole New York Jewish shtick, and ergo, half of the lexicon being Yiddish. And me being a total scando from the Pacific Northwest. And also a little kid, and not a 70-year-old man, like all the writers for MAD. My parents were of no help in translating.

That said, I still find myself copping lines from MAD as an adult, even lines that made no sense to me when I read them. I had a shitload of the digests [half of which ended up all chewed in little scallopey patterns when one my pet gerbils got loose in my room for a day or two], and I clearly remember this one parody of a Coke commercial with a final panel showing some greasy-faced teenager with a fast food tray and the [partial] jingle, “Face full of zits!  Coke’s the pits!” “The pits” was just so lame and inert and outdated, even when it was contemporary, it slayed me for life, and now I use it all the time when reviewing movies and plays.

(The hippie gag above is straight-up ripped off from a strip as well, a Don Martin one, I’m almost sure. Why did MAD hate hippies so much?  It was so weird—what was their damage?  Like, it bordered on pathological, especially for a self-identified alternative rag.)

(Oh, and I remember being totally confounded by the word shirk for, like, months after seeing it in MAD and not finding it in any dictionaries, and then it started popping up in Matt Groening‘s …Is Hell books too!  Have you ever heard anyone use this word in a non-comic context?  Who says that?)

Anyway, despite being profoundly confused most of time, my devotion to MAD was strong, and I had a gigantronical collection of mags and digests by the time I was 10. (I actually got busted once in the 5th grade for starting a little MAD and Cracked business, selling my freshly used back issues for one third of the cover price.) Whatever I didn’t understand lexically was worth it, because I learned almost everything I knew about cartooning at that age from MAD. Especially Al Jaffee‘s yelling people’s mouths in “Snappy Answers,” which I still use. Why mess with a good thing.