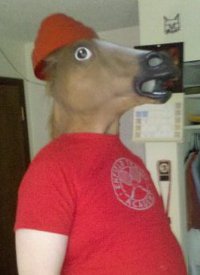 Man, I know how to have fun.  I put on my horse-head mask and energy dome and went on ChatRoulette (Omegle’s video chat wasn’t working really well and it was harder to keep going to people after folks stopped).  It was funny, because, of course, there were lots of masturbators.  Yet I made a decision to NOT click off of them — and they all clicked off of ME.  That was pretty awesome.

I also had a few conversations too — some folks dug it.  Some college girls took a photo of me, and a few other folks had good conversations.  There was one broken english one that I had for a while — I couldn’t place the accent — I’m thinking maybe Italian?  It sounded kinda like Spanish but more guttural — sorta like, I dunno, Boris Badenov speaking spanish-inflected English.  They played the guitar a bit, and I sung “Yesterday” as the horse.  (The horse voice is, well, basically a higher-pitched version of my Mr. Skull impression, honestly.)  My throat’s a little sore, and my head is totally hot, but it was worth it.  I also made an army guy laugh.  So that was good.

This is something I’m gonna have to do more often. Though I don’t know if I can top makin’ a dude lose his erection.