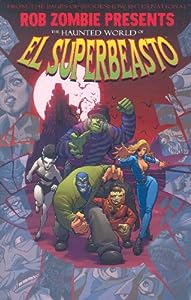 Some time ago, I reviewed a naughty little animated film on Kittysneezes entitled The Haunted World of El Superbeasto, an exercise in excess written and directed by Rob Zombie. While it may seem like this movie was nothing more than a mature-themed parody of horror films and superhero cartoons, it was in fact an adaptation of some equally excessive comics.

To most, Rob Zombie is the musician who fronted White Zombie during the ’80s and ’90s before going solo… and nothing more. Others will recognize his move into the cinema, helming such films as The Devil’s Rejects, House of 1,000 Corpses and The Haunted World of El Superbeasto, the last one an animated feature.

However, he also wandered into the realm of comic books for a time, which is where the oddball Superbeasto made his first appearance.

Those Spook Show International issues can all be found in one convenient place for those who missed them (or who would simply like to see them again): Image Comics‘ trade paperback collection Rob Zombie Presents: The Haunted World of El Superbeasto (ISBN 978-1-58240-788-3; $19.99). And, just like the film that would eventually follow, this collection is absolutely not for everyone.

As writer (and narrator), Zombie brings his offbeat sense of humor into print, sarcastically (sometimes even sardonically) telling us what he thinks we should know, which is not always related to what actually unfolds before our eyes. The book presents a series of twisted, unbelievable stories with plots so jumbled even a master jigsaw puzzle solver would throw his hands in the air in defeat. But anyone who comes into a production involving El Superbeasto expecting a well-told story is very much missing the point.

The Superbeasto series is both a satire and a parody and targets everything in pop culture from very recent to very outdated, and the references fly so fast and so often that one has to be very, very knowledgeable of pop culture to possibly catch all of them. Many are hilarious, some are below the belt and just about all of them are wrong in so many ways. There are plenty who would find this book offensive just because of some of these take-no-prisoners gags, and this is before one takes into account the graphic violence, nudity, sexual situations and frequent profanity that grace its 288 pages.

The back cover warns: “Mature Readers Only!” And it isn’t kidding. These comics are strictly for adults. Specifically, it’s for those adults who like this sort of thing. It’s for people who like goofy adventures filled with flying blood, crazy monsters, naked women and insane action. It’s for people with sick senses of humor and odd taste. In other words: people like me.

This full-color graphic novel is divided into four major sections. The first section focuses specifically on El Superbeasto and his nutball adventures (including an early version of the story that would later find its way into animated form, complete with somewhat different renditions of Dr. Satan and Velvet Von Black), the second focuses on his hot eyepatch-wearing sister Suzi-X, the third on monster slayer Simon Deadmarsh (a fun character who was not lucky enough to make it into the film) and his team, and the fourth on presenting a gallery of cover art and other bonuses. Origin stories for El Superbeasto and Captain Frankenstein (a crimefighting ally of Beasto and Simon Deadmarsh) are included as well.

Several artists lend their talents to this collection, with Kieron Dwyer (whose work includes Batman and Daredevil) contributing to the largest number of stories, including the opening story featuring Dr. Satan. My personal favorite story, which comprises chapters seven through twelve of Beasto’s section, is drawn by E.J. Su, whose style combines elements of Western and manga-style art in a very attractive way. (It’s my understanding that Mr. Su left the business for the less-than-fulfilling industrial designer career. I have something to say to him: get back into the comic book industry! You liked it better, and we like your art! You’re good at what you do; this is where you belong!) Suzi-X’s adventures are drawn by Pat Boutin and Simon Deadmarsh’s by Fabio Laguna (not the musician as far as I know, though I could be wrong). Laguna’s art bears more of a resemblance to the art style seen in the animated film, making it feel familiar to those who have viewed it.

Zombie seems to enjoy poking fun at British culture, and just about every story has some element of this. Captain Frankenstein himself is the most obvious example, being an English rock star turned crimefighter. In one story, Suzi-X and her robot sidekick Marvin (who is noticeably not the horndog he is in the film) are surrounded by zombie Ringos sporting the classic mop-top hair, and their slang is so contagious that Marvin winds up speaking precisely like them for most of the story, which naturally drives Suzi-X insane. Another story depicts Suzi-X meeting up with Bobby Wolfgang and the Moloko Boys, who look and speak just like Alex DeLarge and the droogs (“Oh, my droogies, I’ve got a warm feeling down in me gulliwuts! This sweet young devotchka has got me yarbles all bunched up real horrowshow, right, right?”). Even Angus, the man-bat member of Simon Deadmarsh’s team, speaks in a thick British accent.

The dialogue, in addition to its frequent use strong language, is notable for seldom being serious, and when the characters aren’t busy contributing to the growing pile of cultural references, they’re making insightful remarks at odd times or throwing out cheap insults or strange non-sequiturs. Another member of Simon Deadmarsh’s team, Milo the Mighty Man of Rock, somehow manages to walk away with some of the best lines in the whole book (“I’m ready to kick this mug’s ass just like my momma used to kick mine!” and “Reminds me of my momma’s pea soup! I’ll tell ya, that broad couldn’t cook a pot of water!” being two particular favorites). Beasto himself bluntly speaks his mind in a hilarious manner, not comprehendin
g how his honesty about favoring hedonism over saving the day could somehow hurt his superhero image (“As usual, the world crumbles as soon as I take a friggin’ vacation!”). Zombie himself, however, dishes out some of the biggest laughs with how directly he acknowledges the sheer ludicrousness of it all, even going so far as to apologize for the childish words of a supposedly genius-level scientist who has just soiled his drawers.

It is worth mentioning that this book is referred to as “Volume One.” This implies that there is or will be a Volume Two, but this does not look likely to materialize. This is probably the only book of El Superbeasto comics we’ll ever get, and really, that’s too bad. I know I wouldn’t mind seeing a follow-up to this, especially if Zombie decided to get even more outrageous with it.

It’s not for kids, it’s not for prudes and it’s not for those who take their funny books seriously. The Haunted World of El Superbeasto is violent, sexual comedic excess for readers who enjoy those comics that step out of the mold. If this doesn’t sound like your sort of thing, stay as far away as possible for your own good. But if this is your kind of thing, you’re going to love it.