Hey everybody, I’m Joe Meyer, and welcome to Furreh Nuuz Teevee, a strip that makes fun of furries. This strip has gotten a bit of attention within the fandom, since I started doing the strip earlier this year. It’s gotten some positive and negative feedback, but more positive than anything else, and that has inspired me to continue doing the strip. After the strip, I’m going to provide a bit of commentary, letting you all know the inside stories behind the strips, which are inspired by the (un)real goings on with the fandom. 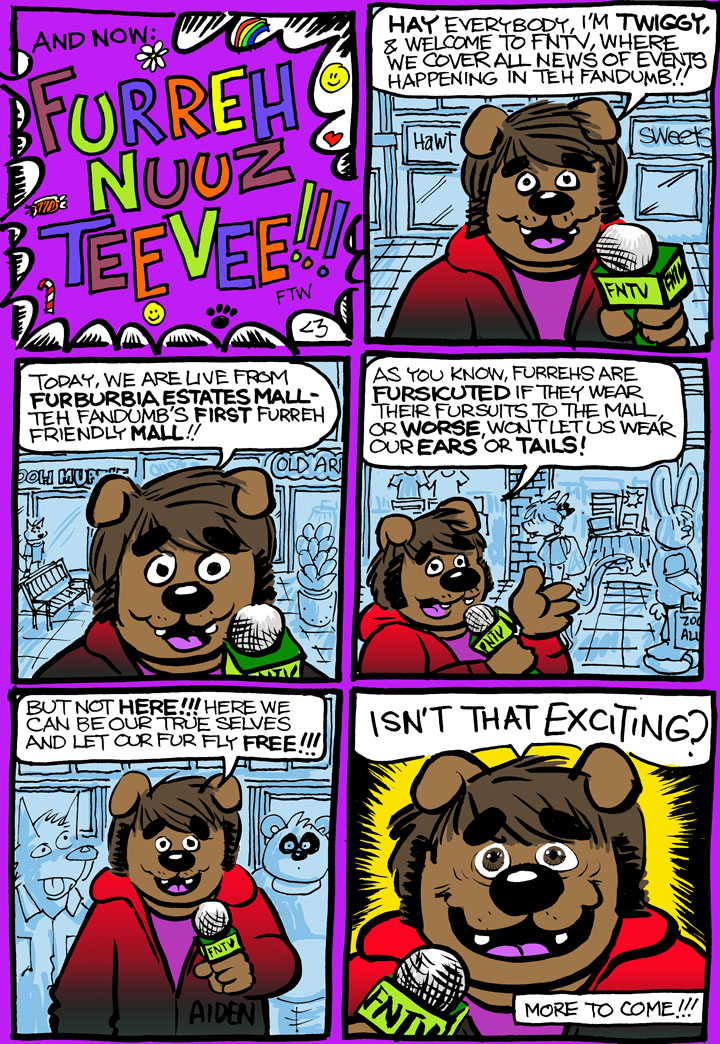 The strip came about earlier this year, while I was a member of a couple of snark communities focusing on the furry fandom. We make fun of some of the more pathetic aspects of the fandom. Because, as you may already know, there are people who are in the fandom that make us furries shake our collective heads. Even when they are shown that they are acting irrational, or inappropriately, they tend to get all defensive, and keep on doing what they are doing. So why not make fun of them? In any case, one of the posts had the story of a furry that was planning on doing a video blog about the goings on with the fandom, with news and interviews with well-known furries. As they had said, they wanted it to be a furry version of The Daily Show. A collective groan was made in the snark community, and I said that if there were any episodes produced, that I would throw on my kangaroo costume and give a commentary about the show, ala Mystery Science Theater 3000.

The show never happened, but the thought occurred to me, why not do something myself that makes fun of the furry fandom? Since I was a member of these furry snark communities, I would never run out of material. So I based Twiggy on the guy you wanted to do the furry news show, a mix between a bear and the Fisher Price black & white dog, with a touch of Goofy.

The secret to the strip, is that I am making fun of the really messed up stuff that goes on within the fandom. Artists begging for money ruthlessly, pedophiles using furry to get sex, people begging for free art, publicly posting about having unprotected sex in their hotel room, stalkers, trolls, squealing furries that wear their fetishes on their sleeve, are amongst the actual subjects I’ve covered so far. In short, the people in furry that makes you slap your head and question why you are in the furry fandom. I am merely holding up a mirror and bringing it to light, albeit in a heavy handed way. Let others be serious and constructive, in my opinion, a lot of that falls on deaf ears, and it is merely preaching to the converted. More often in the fandom, people are hyper-sensitive to constructive criticism and go on doing dumb shit, no matter what or how you say it to them. So why not poke fun at them? The strip practically writes itself. In some strips, I have lifted the actual words the person that I am satirizing has been saying! Let them go down with their own words.

It helps that I don’t take the fandom all that seriously (which is why I call it Teh Furreh Fandumb), and I think nobody should either, I think it’s a healthy attitude, and it keeps things in perspective. Not taking furry seriously will prevent most people from leaving the fandom bitter and hateful towards it all. “OH THOSE FURRIES, LOL”

Okay, about this particular strip, it’s obviously the introduction to the strip, and it sets the tone for how the strip will work. The art is VERY cartoony, and colored obnoxiously to match the mood. I apologize if your eyes are bleeding from reading the strip, but that’s what I am going for! Twiggy, at this point, is excited about everything about furry, and is all too happy to show it. He’ll be interviewing some of the more infamous of ‘Teh Fandumb’

Sorry about the novel up there, in the following weeks, I’ll try to keep it a little bit brief for everyone! Enjoy the strips and see you next week!