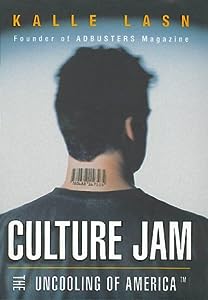 Cover of Culture Jam: The Uncooling of America

In case you don’t realize, today is Buy Nothing Day. If you don’t know what Buy Nothing Day is, well, it’s pretty self-explanatory; it’s a day in which you buy nothing. Why is it today? Because people seem to think it’s the biggest shopping day of the year, even though it’s not.

Actually — if you don’t know what Buy Nothing Day is, maybe that’s not so surprising after all (although the fact that you couldn’t figure it out is frightening); usually, Adbusters is releasing press release after press release about how no major network will air their “anti-ad”, and they have to go to the ghetto of CNN Headline News, since they’ll apparently play anything if the money’s good; although, this year, it’s looking like, according to their own site, they couldn’t get enough money for the TV ad; all they could get was a front-page ad in the Guardian, which, I admit, isn’t too shabby; at least until you realize that the Guardianis a UK paper — not exactly the biggest target audience, considering that the day after Thanksgiving most likely isn’t a big shopping day for them, what with the UK not celebrating Thanksgiving and all.

So, why has Adbusters had such a tough go with Buy Nothing Day this year? I’ve got a few ideas. First, I’m pretty sure people are wanting to distance themselves from Adbusters after Kalle Lasn‘s recentish editorial asking why no one bothers to out the most prominent Neo-Cons as Jewish. (I wish I could say I was making that up; it’s real.) Or maybe it’s that people weren’t too fond of their new line of “anti-brand” branded sneakers[1]. Or maybe they read his idiotic book. Or maybe everyone just realized that it’s a really stupid idea.

OK; I suppose I should own up here; in case it wasn’t clear before, I’ve got major issues with Kalle Lasn. In fact, one of the driving forces behind me writing this is to remind people of his inexplicable anti-Semitic article, and to basically point and laugh at his failures. At least they’ve stopped actually SELLING Buy Nothing Day crap; not making that up — you used to be able to buy posters and T-shirts and other ephemera with the BND logo on it. Eventually they realized that sort of ran a little counter to the whole idea, and quietly knocked that off. Still — Buy Nothing Day is a misguided idea, but that sort of fits the Adbusters aesthetic; good intentions held by people who are so bad at actually thinking things through that they end up working against themselves.

Perhaps my favorite example of this Adbusters Ethos is found in Lasn’s book Culture Jam. Lasn presents various activities that readers can take to Take Action and Take Back Their Culture and all that stuff. One of them is to go to local McDonalds Restaurants and tell the clerks that you won’t be purchasing anything because you disagree with the way they homogenize culture, use rainforest land for their cattle and have lousy food that they wouldn’t eat anyway; basically raising a stink.

Now sure; McDonalds food is lousy. I’m not arguing that. Nor am I arguing that their meat harvesting practices in relation with the deforestation of the rainforest couldn’t be improved. And the whole homogenization of culture thing? Yeah, that could be better, too. They’re all reasonably decent points; hence the good intentions. However — this plan has a fatal flaw; can you spot it?

If you guessed “Hey, wait a minute! A McDonalds clerk doesn’t exactly have the ear of the corporation! Anyway, McDonaldses are all franchises, anyway! So the very best thing that could come of this is the owner of that particular franchise would either cancel their franchisee contract or wait until it was up, and then get a different franchise! And, let’s face it, when it comes to franchised restaurants, no one’s hands are exactly clean, speaking in a metaphorical sense, of course. Anyway, McDonaldses are typically popular, so all that would happen is another franchise would pop up nearby to fill that particular void! And, hey, it’s not like McDonald’s Register Jockey is a prestige job or anything! It’s typically a job you take if you can’t find anything else! Or if you’re Kevin Spacey! But most people aren’t Kevin Spacey, so that pretty much leaves the former! So, you’re basically making some normal guy’s life way harder by coming in there and lecturing him about something he has absolutely no control over! Kalle Lasn is basically just telling his followers to be assholes for no reason!” then you get a cookie! (You get partial credit if you guessed “Hey, actually talking to people sucks!”)

I’m not saying that people should protest or make their voices heard; I’m just saying they should do so in a non-ineffectual way. If you have issues with McDonalds, why not direct your ire at the corporate parent — the folks making the decisions that you don’t like? Why waste your time making some guy miserable just to let you pretend you’re making a difference?

Buy Nothing Day is pretty ineffectual as well. Let’s take a look at it; let’s say that Buy Nothing Day achieves its goal of getting no one to purchase anything (or even a significant portion of people, being slightly more realistic) — what’s going to happen? Well, the receipts will be rather low for that particular Friday. Unfortunately, this won’t make retailers and other companies go “Gosh! Maybe we should change our evil ways! People don’t need us anymore, and we should stop advertising so much and all that other stuff that Adbusters wants us to!” — there’s one missing thing in the equation.

Boycotts work because people aren’t buying a particular product; their sales go down over time, and the company realizes that perhaps they should find out what has people so angry and fix that particular thing. Of course, with a boycott, those doing the boycotting are either buying a competitor’s product, or if it’s a non-essential good, they’re just going without. Boycotts also typically aren’t over until the company acquiesces — typically lasting longer than a day. However, with Buy Nothing Day — it doesn’t work like that. It’s very, very difficult to go any amount of time without buying anything. So, all that’s going to happen is that while the receipts for Friday might be down more than usual, Saturday’s will be higher. At least they’ve finally changed their focus a little bit, and tweaked the campaign into Buy Nothing Christmas, which encourages people to make their own gifts or not actually give anything at all (the latter would make more sense; after all, if you make your own gifts, how are you going to get the materials for them if you don’t buy them? I suppose you could scrounge around, and recycle things, though I’m not sure how successful you’d be.); I can get behind this a little bit more since it does make a bit more sense. After all, without a Buy Nothing Christmas, folks are just going to buy Christmas presents another day than Buy Nothing Day — meaning the end receipts for the season would be exactly the same, just shifted across days. That’s not a wake-up call, that’s a statistical burp.

[1] Excuse the link to consumerfreedom.org; the actual Independent article is offline.