Frieze is the fourth art fair I’ve tasked myself with reporting. I’m not sure how extensively I should discuss the parts of it that are the same as all other art fairs. However, needless to say that I have to be slightly over critical about it. Just how we find the meaning and motivation in arts, similar to wall arts featured in PrintSuccess.  There is some absurdity to traveling to London for it, considering that the majority of the galleries exhibiting there are American. Of course, that means these American galleries know there’s enough money in Britain’s collecting institutions – including museums, other galleries, and collectors – to invest in making a showing and bringing everything over. And somehow, given both the experience I’ve already had and the much more serious, if not sober, attitude of Frieze, I’m inclined to be a bit less gonzo about the whole thing. That means I step away from my own experience and actually tell you what this particular white circus says about contemporary art. Unfortunately, because I’m far too rude for the double snobbery of the London art world, I was usually intimidated away from talking to more people or finding out how sales were, or if there were after-hours events, or any satellite shows in time to attend them. c’est la vie.

Hover over the images to get all the information. 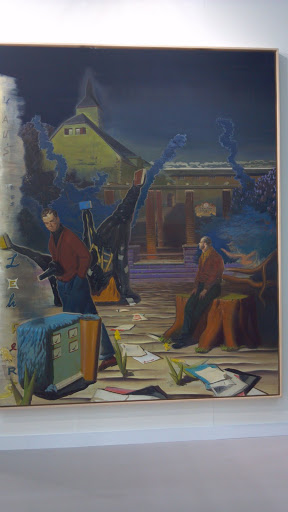 Because it’s nearly the same people and the same art in very different modes, the most striking social difference can be found between Art Basel Miami and Frieze. Miami is a drug-funded party full of free food and drink and music. Frieze is all business. I suspect the difference in sponsors is a major factor: Frieze’s sponsor is mainly Deutsche Bank and several other large German companies. I do rather like the better organization and lack of silliness this gave the show.

Frieze is held, in what may have been an enormous structure to construct for a single weekend, in Regent’s Park, in the north near King’s Cross station and somewhat mid-city. Once inside, I lost all city orientation. In fact, on the second day I came, I persuaded the VIP desk to escort me through their lounge because I thought that way I would start at the side I hadn’t cruised yet. It turned out to still be near the regular entrance, so it was as if the back of the walled tent extended into another dimension. 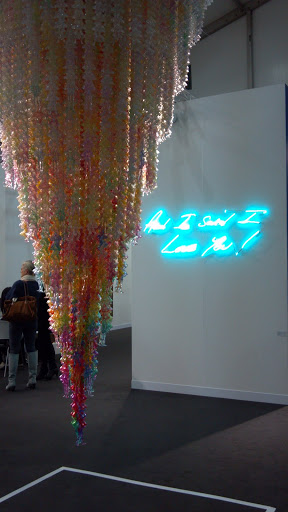 As with other information-dense environments – like academic texts or postmodern novels or the internet – I focus on finding the most interesting art to me and those I experience these things vicariously for. Though it may be interesting to many, I’ve developed a blindness toward most abstract art, conceptual shtick, and supposed attempts at the avante-garde that so please critics. I focus on figurative painting because it’s what I do, web art and tech responses, cheeky references to art commodification, meta-genre, post-media, non-fetishizing multiculturalism, and things that remind me of people I like. So there I am, up front with my underinformed biases. 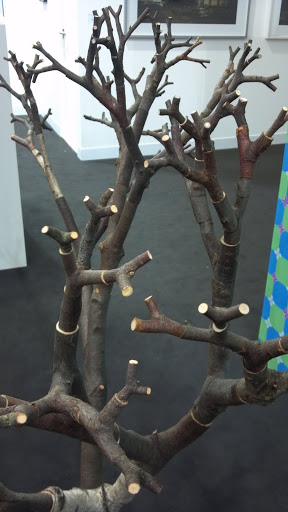 London and Frieze presented some clear themes to me. One was that I kept seeing trees in everything – information trees as well as a distincly English manner of painted tree. At the Tate, mostly, I also noticed an odd tendency to organize rooms so that the minority or political issues were always in dead end side rooms. Another Tateism that definitely reflected in Frieze was post-historicism: London’s millenium of political continuity encourages a disbelief in modernist style breaks. Art of the past is not only appropriated or responded to by contemporary art, but considered within the same context, with the same tropes. 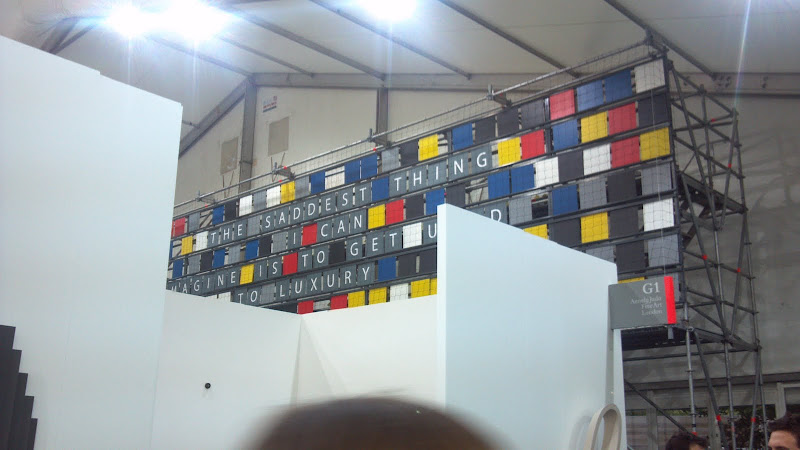 Because art shows are only curated within the gallery booths, I can’t speak for the overall choices of the organizers. As usual, most of the space is rented by blue chip galleries, with a few solo shows in smaller spaces by galleries established in the last 10 years. There are several commissioned Projects. One was the giant hand-changed train station style sign, above, by Bik Van Der Pol. The most notable was Laure Prevoust’s series of small white text on black enamel paintings custom made for specific spots throughout the tent. Here’s a set of all those I could find. A bit more invisible is Oliver Laric’s recording of fair footage to be released as stock video footage – guaranteeing that this fair will come to represent all art fairs. 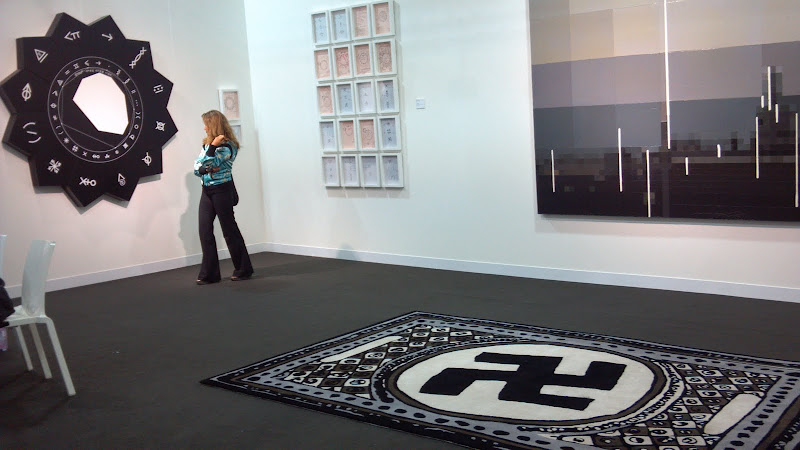 There were also a few particularly well-curated booths. The most eye-catching was Long March Space out of Beijing. Another was a conceptual installation by Austrian couple Muntean and Rosenblum using other artists’ work as well as their own. 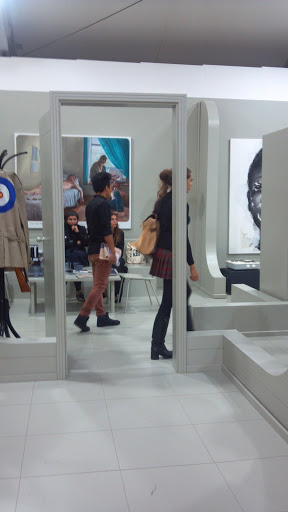 Unfortunately, I don’t know which of those artists made this, which I would usually skip, as it’s all the worst well-used art historical tropes, but it charmed me: 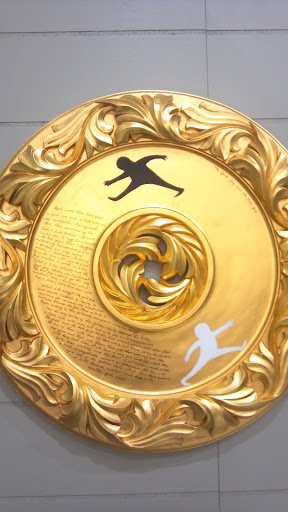 There were these two guys, a good one and a bad one, who were constantly chasing each other, thus maintaining the Good & Bad balance in the world. One day, due to some heavy thoughts in the bad guy’s head (about the misleading representation of evil in general and in the movie industry in particular), he slowed down the pace a bit and the good guy stared to catch up to him. “What if I stop entirely and the good guy reaches, even touches me?” The bad guy suddenly got this very unorthodox idea in his head, which, luckily, didn’t slow him down more.

“What is he doing?!” The good guy was really stressed by trying to maintain the centuries-old established distance between the two. There will be a happy ending to this extremely dangerous situation, though.

From the very center of this golden circle, through the holes, a fresh idea will come out and will pop simultaneously into the good and the bad guys’ heads. And almost immediately after the two of them will take off their white and black skins, the symbols for good and bad, and throw them into that opening, and they will hug each other, and will have a very good fuck (for which they have been waiting since the dawn of civilization) and after a short, unforgettable moment of relaxation, the two will spin out of the golden circle, which, from that moment on will become useless – and that is the really good news. 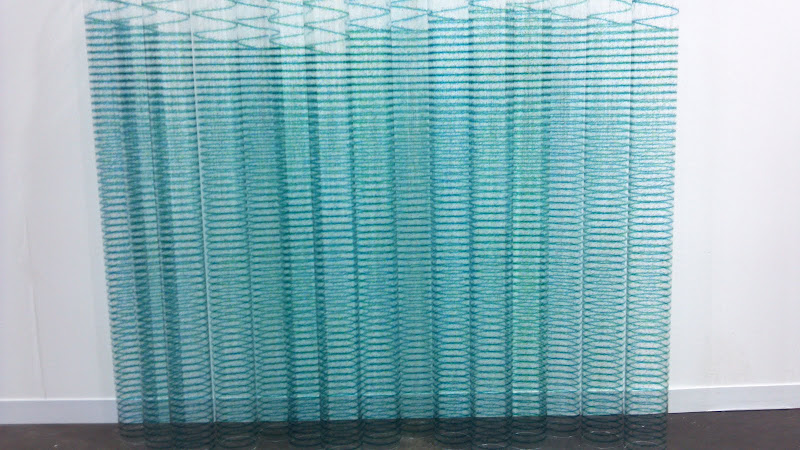 Interestingly, I am drawn to relatively abstract art when the abstraction derives from Middle Eastern tradition, as in this handwritten plexiglass and pen installation (using repeated quotes from the Cyrus Charter of Human Rights) at Dubai gallery The Third Line. I do get the sense that the strongest collecting force at Frieze is Arab royalty. I also overheard more conversations in German, Dutch, and French than in English. This is the realm of international elites, for whom all these fairs are in different parts of the same worldwide metropolis. 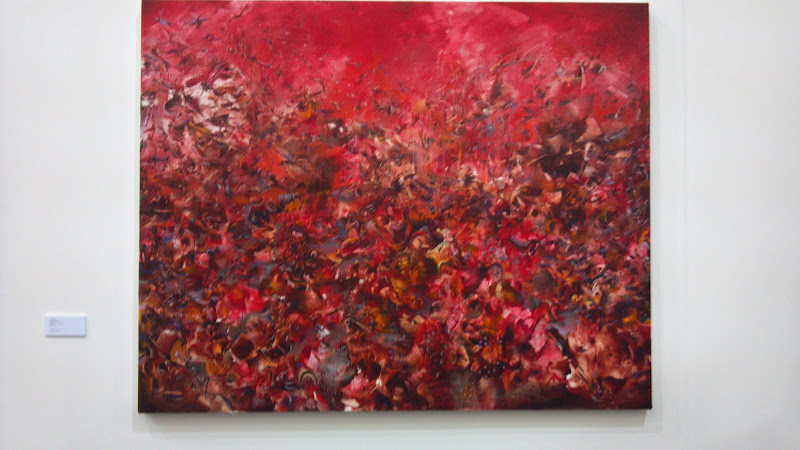 A schoolmate I’m happy to see make it here, and through a Vienna gallery at that. I do wonder whether this sold – it would have been lost in the crowd had I not recognized his work. 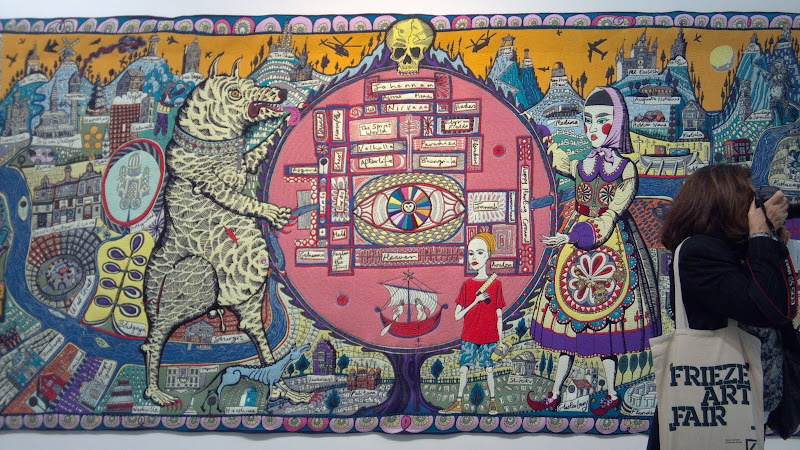 Grayson Perry combines several of the themes I saw: the New Aesthetic attraction to information spaces, and uses of historical craft techniques. In this case it almost orientalizes a Western tradition. 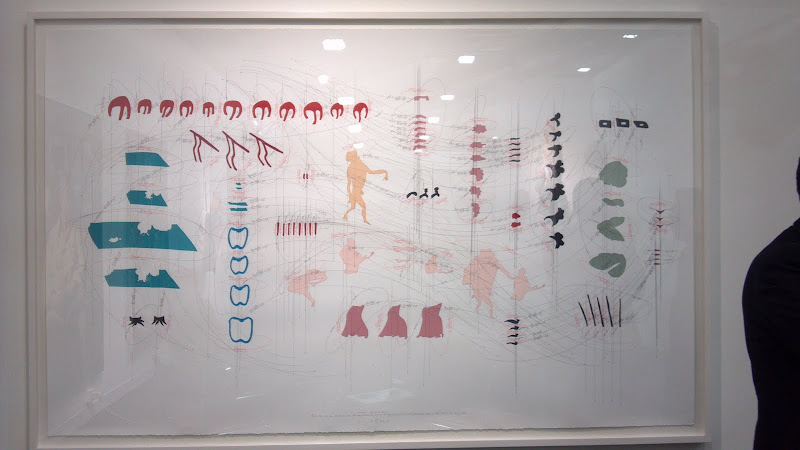 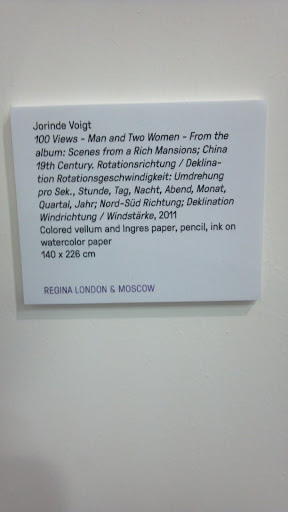 The biological mapping trope often aims to distill the appearance but not the goal of communicating, even though the artists that make it are usually close enough to crazy that they do have an untranslatable system. 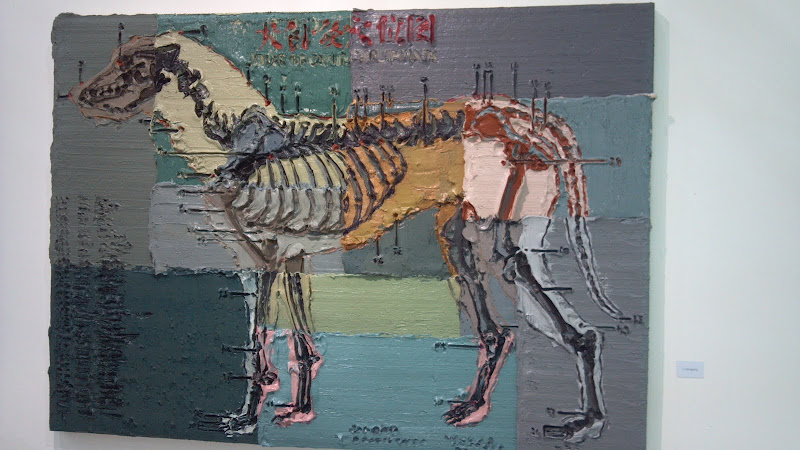 The combination of impasto in these subtle colors with the scientific illustration style I found very fresh. 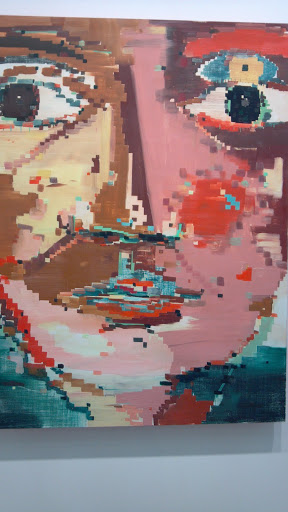 With its title, this analog application of digital vision also draws map analogies. 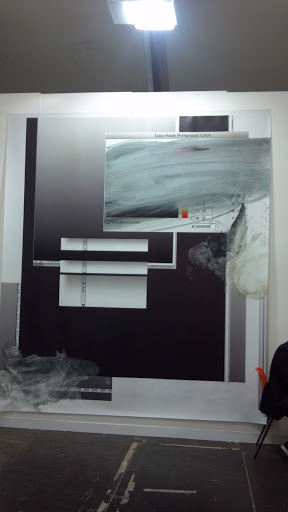 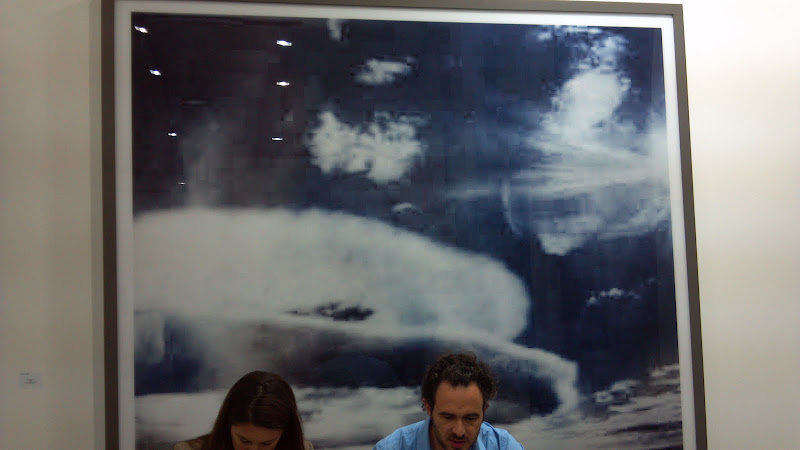 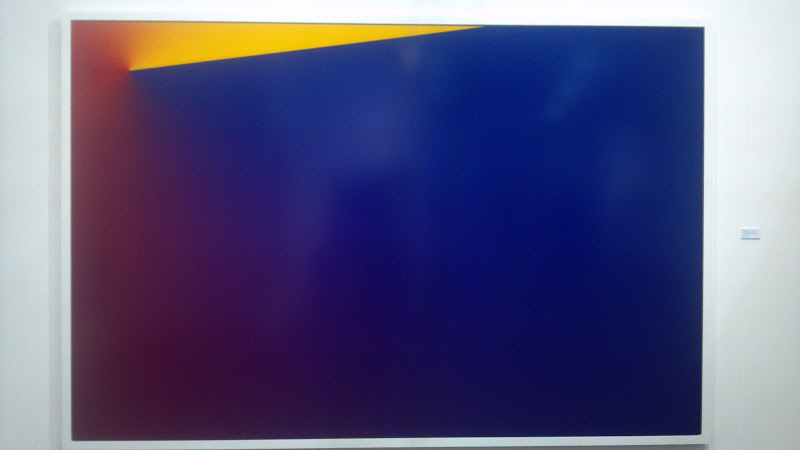 Three of extremely enlarged computer printouts of meta-digital art: one referring to the programs used, at several levels mixed with physical paint, to generate it. The second is an old, much-resaved, originally analog image blown up large enough to make a point of the jpg compression artifacts. Finally, an image made in 3 seconds with a default gradient but likely much more time was spent getting it transferred around and printed. 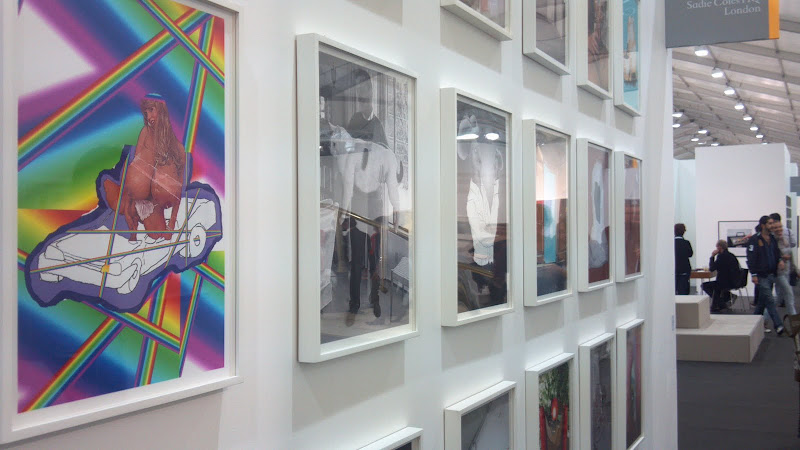 And net art is printed out and neatly framed in white, which is rather absurd. 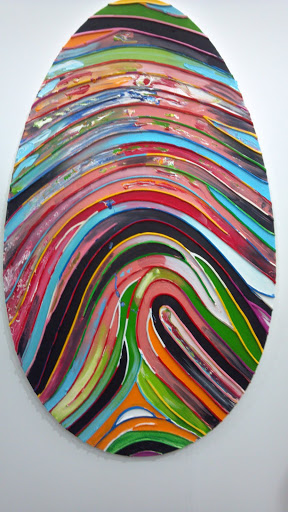 In Damien Hirst’s art world, the artist’s identity, and issues of both uniqueness and ubiquitous surveillance, come into combination with generic artiness, sometimes more cleverly than others. 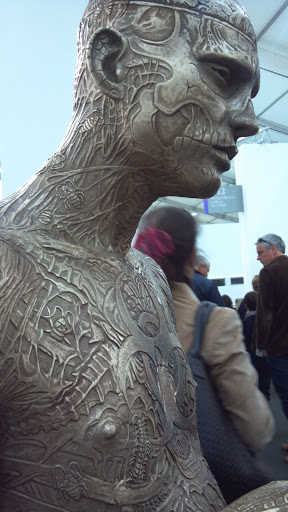 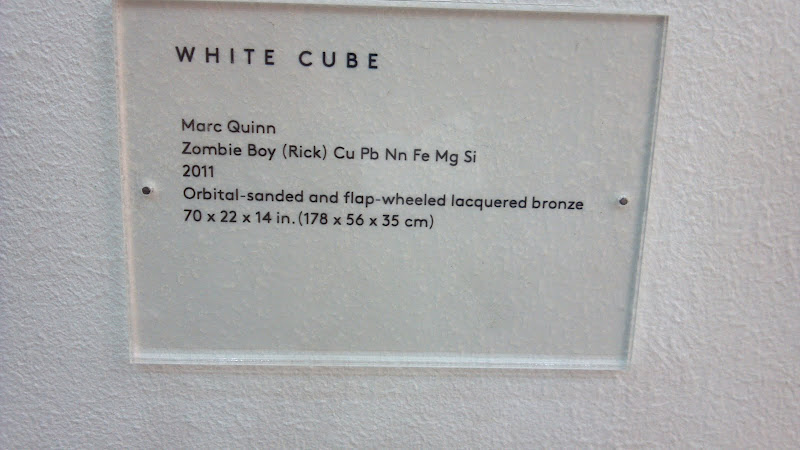 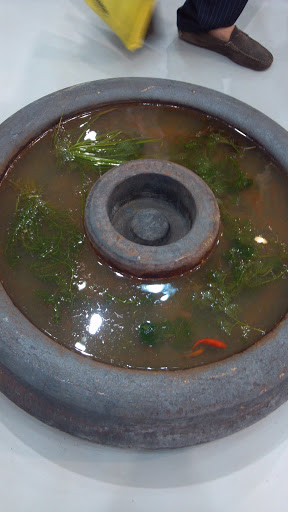 Somehow I’m more uneasy about including living animals in installations 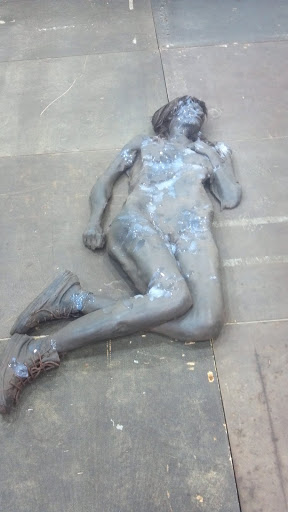 Than I am about the treatment of your average artist’s assistant. 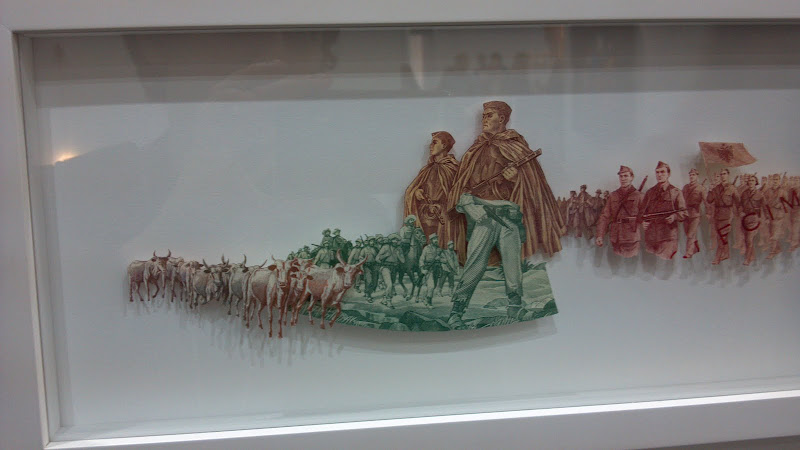 According to The News Spy, they say bankers talk about art and artists talk about money. Well, Torres makes art out of money, especially very inflated or nearly useless currencies. Here he picks up on the martial themes in a collage of different currencies. 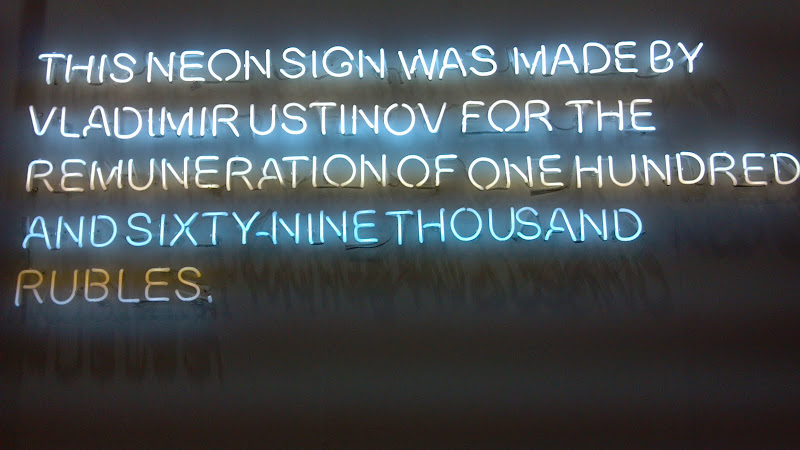 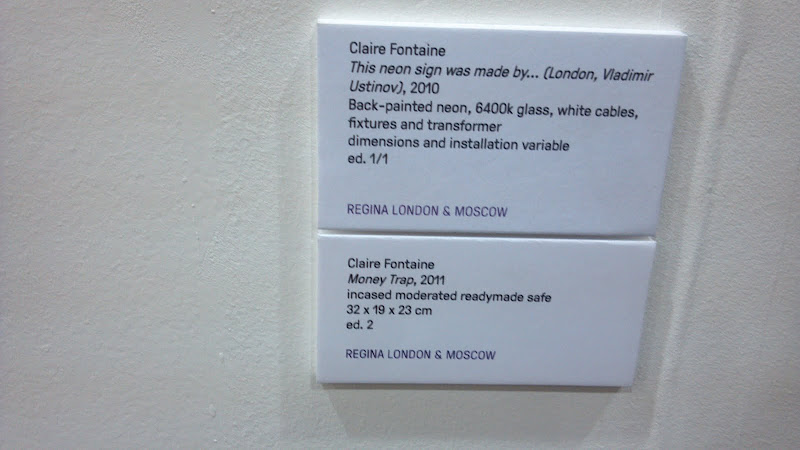 One must always consider our poor, neon sign makers, exposed to the egotistical demands of artists not content to pick a medium they know and stick to it.

Finally, an image of some relevant nearby street art, and a hint at the missed alternatives: 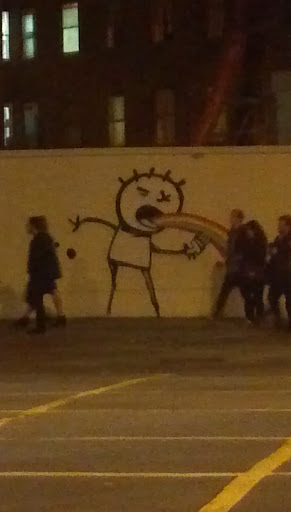 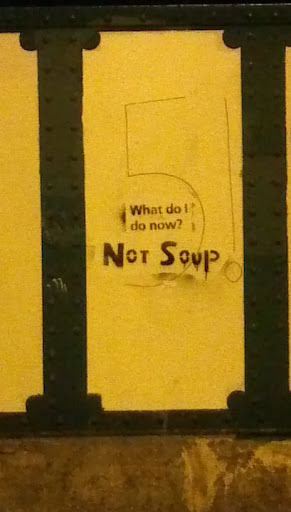 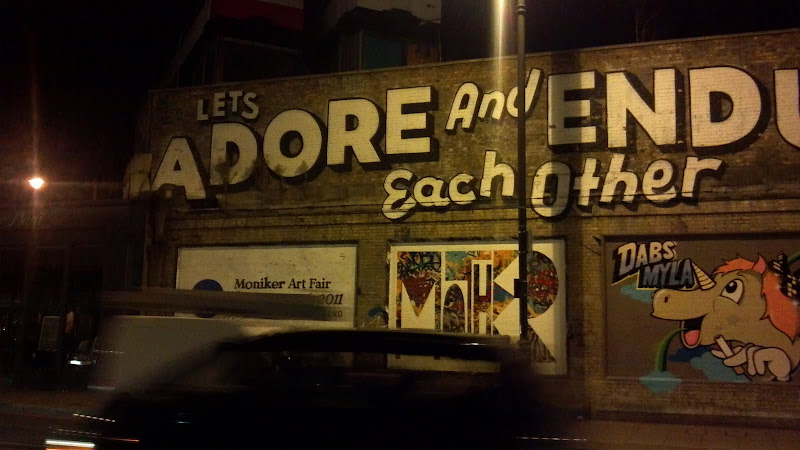 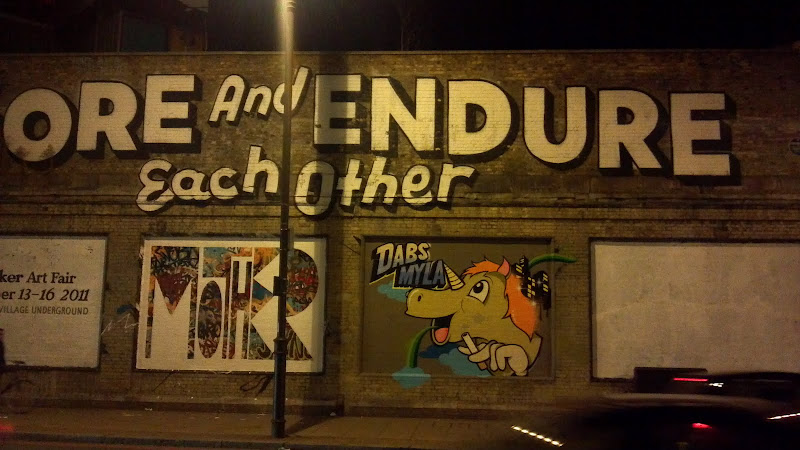