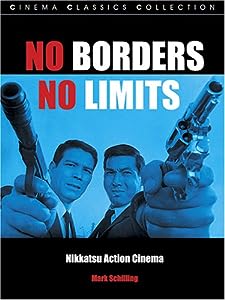 Sometimes Seijun Suzuki‘s fame in the US (albeit cult-levels of fame) can do other Nikkatsu directors a disservice; the story goes that Suzuki was the true artist and the other films weren’t anything special. While Suzuki was A true artist (and still is!), he wasn’t the only one — nor were his films made solo. Suzuki had a lot of conspirators who saw and dug what he was doing and worked with him (even sometimes under pseudonyms), and brought that sensibility to other Nikkatsu productions.

and Story of a Prostitute, and the visual style comes through in this film, with the interiors being designed somewhat experimentally.

This film is a somewhat humorous look at Goro, a Yakuza hitman (played by Tetsuya Watari, who was also the lead in Tokyo Drifter), who accidentally kills a Yakuza boss he was paid only to maim. He’s sent from Tokyo to Kobe to hide out, though he longs to return — particularly since he was told it’d only be six months, and over a year later, he’s still there. He’s hooked up with other yakuza, and is involved in a jewel smuggling that led to the murder of the contact from the jewel source. The dead man’s wife comes to Kobe to find out what she can and gets hooked up with Goro and the pair falls in love.

For a Yakuza, however, Goro’s a nice guy, and you really pull for him, particularly when it’s discovered that his own crime family has put a hit on him due to inter-family politics. The always amazing Joe Shishido plays this hitman, who describes himself as a “flesh-covered killing robot”, approaching his job with a sense of destiny and fatalism. Goro’s just plain charming, which makes this film even more of a joy to watch; admittedly, it’s engrossing all around with excellent characterization and beautiful photography, mostly shot on location.

This is another film that I saw at Outcast Cinema‘s touring “No Borders, No Limits” series, which I again highly recommend. If you can’t make it, it looks like Home Vision did release a letterboxed version on VHS in 2001, and one can hope that it comes on DVD soon.