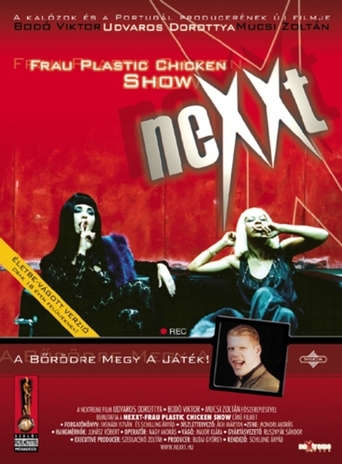 A while ago, the Grand Illusion in Seattle screened The Frau Plastic Chicken Show aka Nexxt. The basic setup: It’s an episode of a TV News Magazine Show looking at the Serial Killer phenomenon, featuring the person A Clockwork Orange was based on as a guest commentator on the main action of the program, mainly the capture of a Real Live Serial Killer.

In film reviews, I typically don’t enjoy going into detail on the plot elements and go into spoiler territory, but then, when I do film reviews, it tends to be stuff that has either been out for ages, or is easy to obtain, or at the very least, the general gist of the plot is known by most people. However, since Frau Plastic Chicken’s so obscure, I’ll need to go into detail so people know what I?m talking about. So, here’s a more in-depth synopsis that’s, regrettably, spoiler-laden.

(WARNING: Here’s where the spoilers start, in case you didn’t see the above paragraph! This warning is here just in case there is anyone anywhere reading this who both Wants To See This and Has An Opportunity To. (It came out in 2000-2001 (The film was copyright 2000, IMDB claims 2001), and is not available on DVD/Tape in the US, UK, Canada or Germany. There are almost certainly ways of coming across it, though, as I assume it was released on DVD/Tape in its native Hungary. Although, I have no idea what these ways are. I checked on Google, I checked a bootleg house or two, I checked Scarecrow Video, and I checked eBay; no dice for any. So, uh, I guess the best way is to keep an eye out for a festival or something.)

Alex-From-A-Clockwork-Orange[1] (Zoltán Mucsi) isn’t really let in on the type of show this is, and so he’s confused as they recreate the events in the book in a cheesy sort of News Magazine Show manner, from beating up a bum, to dosing him with Molokoplus, to the Ludovico Technique, all with embarrassing and stupid questions asked of him[2].

Between the segments with Alex, they cut to the Catching-The-Serial-Killer part of the show — they have a lead, and are reporting live from the Restaurant where he’s about to be caught, spying on him via hidden camera. The proof they have that it’s the right guy (which is damn good proof, since he wasn’t really bright enough to keep off screen…) is that the killer videotaped his recent murder of two prostitutes (this tape is presented to the audience as what’s used for the Ludovico Technique Redux in the episode of Nexxt). As promised by Frau Plastic Chicken (Dorottya Udvaros), the host of Nexxt, and Sony Double, Jr. (Gergely Bánki), the on-site correspondent, soon the murderer (Rex Madison, played by Viktor Bodó) is caught by the authorities, and brought to the studio for an exclusive interview.

From there, the movie begins to derail. Rex and Frau Plastic Chicken chat, but Rex isn’t terribly responsive. To break through to his emotional side, the show cuts to a role-playing scene where they pull a woman from the audience to pretend to be his Suburban Wife, Anna (iMDB doesn’t say, but I think the actress is Lilla Sárosdi). The skit is unsuccessful, until Anna reveals herself to be his childhood friend and first love by pulling out his Toy Pig. Rex breaks down and A Breakthrough has been made. The show then flies in Dr. Paula Aquinas (Lia Pokorny), the Minister of Religion and Some Other Stuff I Forgot Maybe Education for the next segment, The Confessional (forget the actual name of it, but…), where Alex and Rex are pitted in a game-show type scenario, where they have to repent for their sins, and the person who repents for more sins in 60 seconds wins. Rex wins (by cheating a bit, since he drew out his last sin for a long time, though I think this is less a criticism of the film as just a product of my life-long obsession with game shows), and his prize is Clemency. Everyone gets together to show their love for everyone else, and the joy of having fixed the world, and then to sing the National Anthem (which is gibberish). During the anthem, Rex obtains a couple guns (I think he snuck them in, but that would just be LUDICROUS since ANYONE arresting a murderer would be SURE to remove any weapons from them, so Rex MUST have got them SOME OTHER way![3]), starts shooting people and does the whole “You fools! You fools!” thing, then rapes/kills Frau Plastic Chicken (he also killed Sony Double Jr. in the arrest at the restaurant, in case you were wondering if anyone got out alive). After killing pretty much everyone else on stage other than Alex, he and Alex steal the Bishop/Minister’s helicopter, and Rex offers to drop him off at the bus stop.

Then we get a teaser for next week’s show, where Frau Plastic Chicken is in Space Gear, as they’re going to do the episode from the new lunar colony! Then credits.

It’s not really clear whether or not we’re supposed to think the whole thing with Rex is staged, if Frau Plastic Chicken is somehow alive again, if she’s some sort of robot clone thing[4] or if it’s a pre-recorded thing that was just timed to roll at the end of the episode that we’re supposed to go “ha ha, looks like that episode won’t be going as planned!” at. Of course, this also sort of folds into the fiction of the Film As Episode Of Show, because while the bit with Alex and Rex boarding the helicopter is shot as if it’s still part of the show with a portable studio cam, it’s also shot the most filmicly — so it’s sort of vague whether or not the Viewing Audience is seeing this bit or not, but I’m about 99% sure the VA is.

All in all, it was an Very OK Enough Film. It could have been much better, but it wasn’t a bad film. It was a great illustrator of a few points, though:

I think I’m actually making the film out to sound a little worse than it actually is, which is unfortunate. I’m not certain if I’d actually recommend it, though I certainly wouldn’t warn anyone off seeing it. It’s too bad, though, because it had some great ideas but couldn’t find the best ways to go about presenting them, bogging the film down in various unpleasantries that didn’t need to be there. I suppose part of it just comes down to the whole strive for edginess supplanting the desire to make an excellent film. I know the film occasionally makes the festival circuit, so if it comes to your town, you might consider checking it out. Although, if it’s conflicting with something else you’d much rather see, definitely check out the other film instead. But while Frau Plastic Chicken Show is ultimately unsatisfying, there’s enough substance there to make it worth seeing if there’s nothing else enjoyable competing with it. It certainly beats staying home and washing your car, but you couldn’t be blamed if you’d just rather watch old tapes of Brass Eye while flipping through A Clockwork Orange instead.

In the world of the film, even though A Clockwork Orange is still a novel, it’s more of a novelized version of what really happened — so, instead of (as I was initially thinking it was going to be) using the idea of “Real Alex kills/rapes/etc, goes to prison, is rehabilitated through normal means, deals with being on the outside, and eventually becomes a Fully Functional Member Of Society, and whose story is then adapted by Anthony Burgess to make a book about the nature of Evil, Free-Will, Violence, &c…”, Real Alex actually DID go through the Ludovico Technique, and all that. In the film, the book is an elaborated and embellished version of the truth — I’d make a comparison to In Cold Blood by Truman Capote.

The entire film takes place as an episode — no behind-the-scenes stuff, so in keeping with the Reality Of The Film, I’m referring to it as “the episode”, since in the world of the film, someone watching it would be doing so on television, like they would Dateline. That and “cutting back throughout the episode” and “cutting back throughout the film”, though in this case, they mean the exact same thing, they have different connotations and different contexts. That’ll also make things a little easier to follow, probably, since if I’m referring to In-Film events, then I’ll use “episode”, and if I’m referring to the film itself, I’ll use “film”.

Well, they did remove his handcuffs when he got Clemency, so I suppose he could have swiped them from the guards in the Love Fest, but I don’t recall seeing that, but… At least there does exist a buyable alternative than just “Hey, I got guns now!”

After all, they mention when Sony’s killed that they’re administering First Aid, despite the fact that he was shot not-quite-point-blank in the forehead — at the time, I assumed it was a “ha ha! Don’t worry, he’ll be OK!” joke/lie, but with the ending, it could also mean that both Frau Plastic Chicken and Sony Double, Jr. are Immortal In Some Sort Of Way Be It Robot Or What.

I think I’m describing this badly. Homework time: Take a paperclip, and press it against, say, your arm or your leg. See how your flesh slightly rises to fill in the non-paperclippy part of it? Picture taking, say, a dog tag with something cut out from it… or a keychain, I think Esprit used to sell keychains or something like this in the 80s, where it was a dog-tag sized plate of metal with the E cut out of it, and picture doing the same thing with the paperclip — you know how your flesh would rise slightly into the Esprit E? That’s what the logos were, only instead of slightly rising, it kept pressing and pressing until it was rising pretty good like dough. Oh yeah, the cutout was razor sharp and pointy, so wherever there was an edge of the logo, you’d get deep cuts, but ALSO since it was pressing so hard, the skin would rent and there’d be small cuts on the surface.

Basically, “Metamorphosis” in High School. I do have a book of The Complete Writings Of that I got for a buck or so, but I’ve never read it, though I intended to. I later asked him about it, though, and he mentioned how In The Penal Colony featured prisoners being executed by having the name of their crime carved into their own flesh by a complicated crime-name-carving-into-own-flesh device. He also said the Nexxt-logo thing was actually pretty non-kafkaoid, but “well, someone’s been reading Kafka!” is his knee-jerk reaction to scenes featuring lettering being carved into flesh.

If I were doing something like this (I mean, making this film, not videotaping murders), I would have had the killer be sure to move the camera aside so, say, you’d see the blood spattering on the wall, but not the actual violence. Then, in the interview, when he was asked about why he, a murderer, would go to the trouble of taping his crime without actually showing the crime, he’d get all snooty and offended and say something along the lines of “Well, I’m an ARTIST, I don’t think we need to lead the audience along by the nose to show them EVERYTHING, they can make their OWN LEAPS” or something like that. It’s a lame joke, sure, but it’s better filmmaking in the long run.