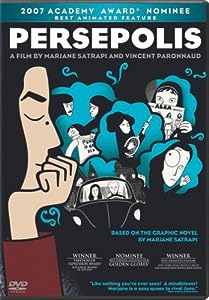 I admit, going in, I was a little apprehensive about whether or not I would enjoy the film of Persepolis; I hadn’t yet read Marjane Satrapi‘s comic and I often don’t find these types of stories interesting. Luckily, however, Persepolis isn’t one of these types of stories — it’s not preachy in the slightest, it’s not an “Issue” film. It’s a story about a person — a real person, Satrapi herself — and it’s very well told. The historical context of Iran and the 1979 Islamic Revolution is important, though to explain the climate she grew up in.

The film is absolutely gorgeous; the animation style takes Satrapi’s original drawings and smoothes them out a bit. It actually reminded me a bit of the animated series The Critic

, another example of animation with an elegant visual style. I mean that as a compliment — people don’t seem to realize what a pretty cartoon that was.

After coming out of the theater, I was so blown away by the film that I bought the graphic novel right afterward at the box office and devoured it. The film is very, very true to the source — which makes sense, given that it was also made by Satrapi (with Vincent Paronnaud). The book goes into more depth — though given that both are rather episodic by nature, it’s not a situation where the story is simplified at the expense of additional context; it’s merely with fewer detours.

The media takes a large role in the book — more so than the film; in the book, the Iranian media acts as a propaganda machine, so everyone gets their news from the BBC to find out what’s REALLY going on. Later in the book, satellite dishes become popular and end up further changing the landscape, both literally and symbolically. Marjane becomes an illustrator at an Iranian magazine (in a scene not in the movie), where two of her colleagues are arrested over cartoons deigned to be blasphemous.

Both film and comic provide an answer to a question first posed by DEVO that I’ve often pondered myself — “Why believe in things that make it tough on you?” The answer became clear — it provides mediocre people who have no other source for power a way to lord over others by embracing the draconian rules and getting others in trouble instead of trying to excel themselves. And, to be clear, I’m not merely talking about religion in general, and Satrapi isn’t either; she shows many “True Religious” people who actually embrace doing the right thing for the right reasons instead of blindly following rules.

The only downside to Persepolis, at least as far as the film is concerned, is that it’s only in limited release, so it’s harder for people to see this outstanding film — at least until it comes out on DVD. If it comes to your town, see it. If it doesn’t, at least the comic is readily available and well worth the read.