While The Dark Backward isn’t everyone’s cup of tea, I love it. And since I was a kid, I’ve always loved Penn & Teller. (Stil do.) So a while ago when Penn Jillette and Dark Backward director Adam Rifkin announced they were collaborating on a film, I immediately backed that Kickstarter. It took a while, but Director’s Cut is finally out and available — and though the premise seems like it could easily go sideways, Rifkin and Jillette stick the landing 100%.

The premise of Director’s Cut is that a guy, Herbert Blount (Jillette), spent a bunch of money on a Kickstarter for an erotic thriller. He spent so much, he gets to hang out on set, and even has a cameo in the film. But he’s obsessed with the lead actress Missi Pyle (herself) — and worries that she’s not being treated as the star she should be. So, he figures, as a producer on the film (an honorary title, thanks to the Kickstarter), it’s up to him to save the movie. Director’s Cut is not just the Blount cut of the film, but Blount’s director’s commentary. 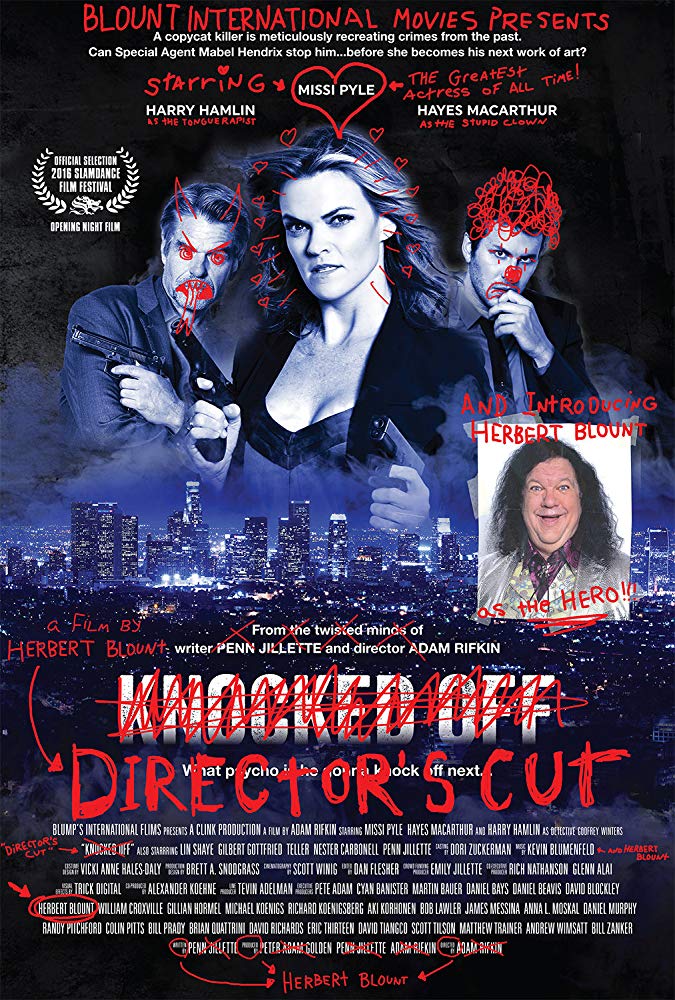 We’ve all seen the type of ’90s erotic thriller that Director’s Cut is riffing on. There’s a series of murders that police must solve, but they’re not gonna let that get in the way of sexy-times. If you’ve somehow made it this long without experiencing one, spend 45 minutes watching an episode of Silk Stockings. (While a TV show, it gives you the feel pretty well. This was always a guilty pleasure show growing up.) In this case, the film-within-a-film is Knocked Off, about a serial killer who recreates infamous crime scenes, like the University of Texas 1966 Tower shooting, 1984’s San Ysidro McDonald’s Massacre and more.

Knocked Off strikes the balance of being a crappy movie that’s fun. If Knocked Off were real, it’d be a perfectly serviceable direct-to-DVD film; a great way to kill 90 minutes, and set to run repeatedly on some of the lower-tier pay channels. So many parodies of bad movies go the route of making the film constantly nudge you in the ribs about how “bad” it is, but really they know it’s bad, so it’s funny, right. (It never is.) But Jillette and Rifkin treat Knocked Off with the right tone; the fictional director, Rifkin (playing himself), knows he’s not making Citizen Kane, but he’s professional and out to make the best movie he can given the small budget and other limitations.

But Director’s Cut, the real-world film, is legitimately smart and well-made. The “commentary” includes real behind-the-scenes info, just like a standard director’s commentary; if it weren’t for the opening titles where Blount scribbles over the credits, it wouldn’t be absurd for someone to stumble on it and think it was a legitimate director’s commentary — at least at first. But Blount’s been re-editing the film, adding in the footage he shot himself (usually with a phone or surveillance cameras), “improving” the film — mainly by adding in more scenes with Missi Pyle. Blount will prank call the actress in her hotel room during off hours, trying to goad her into saying the lines he needs for his version of the film.

And though there’s a lot of meta-commentary going on, the film tracks; everything makes sense, and there are some legitimately hilarious scenes — including Teller’s cameo as a possible suspect and the scene where Blount has his Kickstarter-mandated official cameo in Knocked Off. Jillette plays Blount as both a goofy goon but also someone with real malice — even if Blount doesn’t realize he’s scary.

Director’s Cut is taut, hilarious and legitimately creepy. Given that it’s Halloween, you can definitely do worse than giving this one a spin.

Watch the Director’s Cut trailer below: