My friend Caitie is awesome. She’s a talented writer, musician, filmmaker AND she’s also a puppy-saving hero. Here’s a photo of the puppy in question: 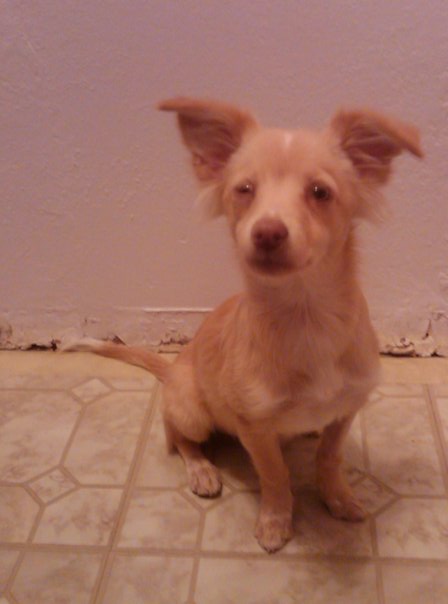 Diego’s a 5-month old Chihuahua puppy who was thrown into her life — sadly, literally. Here’s the full story from Caitie (or if you’re not on facebook, it’s after the cut), and it’s pretty tragic — but the short version is that on her property there’s a cinderblock, and someone threw a bag of garbage against it from a moving vehicle… and in that bag of garbage was Diego, who is decidedly NOT garbage. She and her partner took the little guy to the vet who said that if they’d found him just an hour later, he would have died.
40 hours (and a big vet bill later), Caitie had a new puppy to share her love with. He’s been home 4 days, and he’s still nervous (understandably), but I know he’s found a great home. (Besides, just look at him, isn’t he adorable?)
If you’d like to help out with the vet bill, her email address is in the full story, or contact me at the contact link above, and I’ll hook you up with the info.Heroism is pretty dang neat.


I have some beloved friends who work in animal welfare, and I’ve done a little work there myself, but I’ve never been face to face with an immediate, horrible case of animal cruelty like the one that happened Monday night. Sometime around 9pm we were returning home from the north valley. When we turned the corner down our street, we discovered that someone had apparently dumped a bunch of garbage along the big cinderblock wall on the east side of our property–from the scatter pattern it looked like it had all been dumped from a moving vehicle. Immediately I had a bad feeling about it, but I got out and took a look. As I got closer…something under the garbage moved, very weakly. I yelled to Wendy for a flashlight, but before she could even get there I discovered that the “garbage” contained a deathly ill young puppy that had been thrown at the wall along with the rest of the stuff. I picked him up–he was completely limp, barely breathing–badly dehydrated and covered in severe diarrhea. I could tell he was a long haired chihuahua about 4-5 months old, and that he was just about to check out of this life. I wanted to call the police or Arizona Humane or something, whatever it would take to find and arrest the people who did this to the little dog, but there just wasn’t any time. We found an animal hospital and rushed him out there–I feared he would die before we even got him that far, but Wendy drove fast and I just tried to keep him warm and calm.


The vet tested him for parvo–which to everyone’s surprise came back negative–and started him on IV fluids and some glucose. His blood sugar level was at 20 –a normal low reading for a dog would be in the 60s. So he was crashing big-time. The vet wanted to do a wide variety of diagnostics but at this point our vet bill was already well over $400 and heading towards $600, so we had to limit his workup to the basics. He responded well to the glucose and fluids, came back from the brink–they kept him on fluids all night, and at some ungodly hour we went home to get a couple of hours’ sleep. We were back at the animal hospital at 7 hoping we still had a dog there–and we did. We transferred him over to our longtime vet, who is a bit more accommodating with regard to costs and payment plans, and they took good care of him during the day–though he steadfastly refused to let anyone other than me handle him and was a snarling beast to anyone who tried. I shudder to imagine what those people did to this dog before they threw him out like garbage. But he continued to respond to treatment, took food and water enthusiastically, and by the end of Tuesday he was a thousand times better. We brought him home Tuesday night and then took him back again Wednesday for another check–they considered keeping him another day but decided he was responding well enough to go home. So, he’s here in my bedroom now snoozing in my late great pup Rocky’s old bed, so bright eyed and sweet and happy I cannot even believe this is the same dog who was on the brink of death two nights ago. I think we may end up keeping him…we named him “Diego” for no particular reason other than he seemed like a Diego (and responds to it). I’m still a little freaked out by the horror of finding him, and by the idea that someone in the nearby neighborhood might be responsible for his abuse. But it could have been a lot worse. He’s a good boy. I’d still like to see his abusers strung up, but I’m just grateful the little guy pulled through.

I know times are tough all over and there is absolutely no expectation or obligation whatsoever, but it would be an understatement to say his vet bills have hit us especially hard. If you have the means and want to chip in a couple of bucks to help, I’m on paypal as caitie.dee@gmail.com.