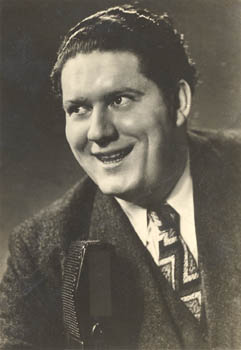 Josh Kassel just sent me this link (about fifteen minutes ago, to be exact) about Dick “Two Ton” Baker, a big name in children’s entertainment from Chicago in the 30s through the 1970s.  The site’s got a whole bunch of mp3s taken (and cleaned up by the site’s owner, also named Dick Baker — no relation) from the original 78s.  Sixty of ’em, in fact — plus some radio appearances…. including, for the Negativland fans out there, a few episodes of “The Crosley-Bendix Shows”, promoting the Crosley line of appliances (made by Bendix).  So, there you go — that’s where the name of the Universal Media Netweb’s foremost cultural reviewer came from.

The songs are really good — and fit a lot of that Polka feel that was popular in the midwest at that time (and, honestly, should be popular again.  Polka is wonderful.) — and wrote a lot of classics, like “The Too-Fat Polka” (Arthur Godfrey had the hit) or “I Like Stinky Cheese”.  He also wrote “No Beer In Heaven”, popularized as “In Heaven There Is No Beer“, done by many, many people, including Frankie Yankovic and Brave Combo.  He was also a friend of Duke Ellington, and was one of the only other people to play the song “Satin Doll” by the Duke for a while.  Dude’s pretty awesome, and by all accounts, it seems like he was a good guy, too.