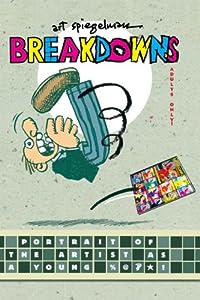 Art Spiegelman is (rightly) known as one of the founders of modern comics. Maus

is often given the credit for making the graphic novel a viable and respectable art form, and his anthology series of the 1980s and early 1990s, RAW (originally a magazine, then a series of books) showed what could be done with the form.

However, while Maus‘ fame and reknown came mostly from the subject and content, using the form of comics to tell the story of the Holocaust, Spiegelman’s new-old book, Breakdowns is more about the form — and, taken together, provide an adequate course in how to write and create comics.

The material in Breakdowns, an extended reprint of his first collection of comics from the 1970s, plays with the form and language of comics, showing other ways of telling stories that rise above the storyboards-from-film way that normal comics can be.

Given the earliness of the material, some of his art can be a little derivative — parts look like an R. Crumb knockoff (who he admits was a huge influence) — but regardless of whether or not he was still trying to find his visual voice, the art IS very well done and the content is outstanding. His Mad influence is particularly obvious, on material like “As The Mind Reels”, the soap-opera parody that simultaneously makes fun of the form AND the medium of broadcast television itself (the vertical hold goes out on some panels, there’s static and channel drift) in a way similar to Kurtzman’s (and later Mad writers and artists like Don Martin) anarchic style of satire. In the book’s introduction (written in 2008), he refers to the best advice he ever got in cartooning from his father while packing a suitcase — you only have so much space, so you’ve got to pack in as much as you can — a lesson reinforced by Mad with rivets and chicken fat.

Other strips, including “The Malpractice Suite”, in which Spiegelman takes panels from Rex Morgan, M.D. and draws around them, remind me of the later work of Shintaro Kago where he incorporates the panel forms and structure into the work itself. (That link is not work safe, but, well, you’re reading a review of Art Spiegelman’s non-Little-Lit work, so, let’s just say this entire thing isn’t the most kid-friendly material on this site.)

My favorite story in the book is probably the “Ace Hole, Midget Detective” piece, one of the longest in the original Breakdowns, a parody of the hard-boiled detective piece which brings in the author himself in a story that is about the collision between high-art and low-art that comics are and can be — the femme fatale is a Picasso piece, while her saps are said author and a Mr. Potato Head art-dealer; the high-art dame wins out in the end — though not to the complete loss of the low, as we’re left with the image of a tiny person trying to ride a small dog like a horse, and upon being knocked off, starts making up another hard-boiled narrative out of whole cloth.

Reading Breakdowns makes me wish that I weren’t too young to have read RAW when it originally came out; actually, for some reason, the word “raw” is one of those I find oddly uncomfortable — some people hate “moist”, I’m not a fan of “raw”. Regardless, however, I remember when I was in 4th or 5th grade, the Scholastic Book Club sheets we’d get actually was SELLING an issue of RAW (alongside Maus, which I wanted but had to wait until I was older to get — not out of “Oh, that’s too old for you” from my parents, but because it was too expensive) — presumably the idea was “This guy just won the pulitzer for Maus, so let’s get his new book in too! I swear on a stack of Eightballs that this is the truth — I remember being drawn to it and repelled by title. It was my first exposure to RAW — the idea that it even existed, really — and there really isn’t anywhere else at that time that I would have seen it. Wiggy, huh?