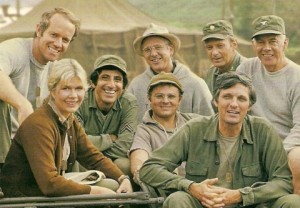 I grew up aware of M*A*S*H. I was just over a year old when the show ended on February 28, 1983. Thirty years ago. But it wasn’t until I was in high school that I fell in love with M*A*S*H. I honestly cannot remember what happened – in retrospect it feels like one day I didn’t really care about it and then out of nowhere I was obsessed with the show and was taping episodes off of TV. I know that this must have happened around 1998 because one of the things that drove my family crazy was that I would spend hours copying the M*A*S*H episodes off of VHS, onto the computer, edit out the commercials, and then copy the episodes back onto the tapes. This allowed me to fit 5 episodes onto a tape instead of 4. And it removed the commercials. In any case, I only figured out how to use the Avid Cinema software that allowed that to happen in 1998. By the time I graduated high school and was leaving for college, I had over 30 VHS tapes full of episodes of M*A*S*H. This was a few years before DVDs of TV shows became a thing.

Though today I wouldn’t say that M*A*S*H is my favorite TV show, I would argue that it is one of the greatest sitcoms of all time. Possibly even THE greatest sitcom of all time to date. It’s not perfect, and years later looking back, I can actually see that in many ways the show was kind of irritating. Especially if you’re not enamored of Alan Alda. And certainly the show went on long enough that, looking back, we can choose our favorite M*A*S*H season(s) and phases.

It’s very amusing to me how varied people’s love of the show can be. There are people who only like the first three seasons, some who say the show was great up until Frank Burns left. Some people take issue with Radar, or with Margaret, or with Winchester, or Klinger. I personally am a fan of the show overall. The only episodes that I actively avoid are the ones about Father Mulcahy going out of the MASH to have adventures. Those episodes are boring to me.

I can absolutely understand people’s complaints about the show. The great thing about living in the future, though, is that we aren’t at the mercy of reruns and we can watch any episodes of M*A*S*H that we so desire if we have the means to obtain and view them. My parents bought the seasons of the show on DVD as they were released. Because they were doing so, I never felt a need to do that myself. Until recently when I realized that I could get the full collection (the Martinis and Medicine one) for a song. And so I did. Now, my favorite thing to do is to pick a season, then pick a disc, then pick an episode. I do the same with Star Trek: The Next Generation and, one day when I’ve finished watching through the episodes in order, I hope to do the same with The X-Files. That, to me, is the true test of a great television show. One where I can just pick an episode out of a hat and sit down and enjoy it.

Another great thing about living in the future is that we can watch M*A*S*H without a laugh track. I highly recommend it. If I could remove the laugh track from every show on TV, I’d do it.

I don’t think that it would be fair to list off favorite episodes of mine. I actually have never had favorite episodes of M*A*S*H. The one episode I always like to mention, though, is ‘Life Time’ which is like the great grandfather of the show 24 which I watched voraciously (when I worked at Blockbuster, that show was how the employees bonded – we shared the early seasons on DVD, they were shooting the fourth season while I was watching my way through the first three, and I watched the rest as they aired). I also really like the episode where it’s just Hawkeye and he doesn’t stop talking through the whole episode. I realize that if you’re not into the Alan Alda preachy side of the show, that episode probably sounds like torture. But Hawkeye is my favorite character.

And that’s really what it comes down to – I love this show. Hawkeye is my favorite character. I love the bromance between Hawkeye and BJ. I love Larry Linville as Frank Burns (when Larry Linville passed away during my senior year of high school, I was devastated to the point where I was accused of being morbid about it). I love Harry Morgan as Colonel Potter. I love Jamie Farr. I love David Ogden Stiers (did you know he finally came out? I missed the boat on that one but am delighted to hear it!). I love the character of Radar (my impression of Gary Burghoff is less than complimentary though). I FUCKING LOVE ALAN ALDA.

When I was in the height of my M*A*S*H obsession, I was in high school. Something that I used to do in high school was write fan letters to celebrities and ask them for autographed photos. I wrote to all the surviving M*A*S*H cast members at the time and received: an auto-penned signed photo of Alan Alda, a signed photo of Wayne Rogers, a personalized (with my name misspelled pretty badly) signed photo of William Christopher, and a personalized signed photo of Mike Farrell along with a hand written letter from him (nothing life changing, just something along the lines of ‘This is either very late or a duplicate, either way I apologize for the delay, it was lost in a pile of papers’, but still AWESOME).

While the later seasons are often cited as the weakest, I still appreciate them. And if I get a little sick of some aspect of the show (Margaret seems to only communicate by yelling most of the time and that does bother me), all I have to do is pick another episode from another season and I’m in love all over again. In the world of the future where we live now, persons of privilege (such as myself) can pick and choose their entertainment in a way that was not possible back in the day of M*A*S*H first runs and through at least the first decade and a half of its reruns. The episodes are barely over 20 minutes long and there are enough good ones that the odds are in your favor if you’re playing M*A*S*H roulette.

And though I’ve never read the books that started the whole thing, I am a huge fan of the Robert Altman film and I highly recommend it to anyone who has even a passing interest in the show. It’s a completely different beast, but a majestic one nonetheless.

Thank you, M*A*S*H, for thirty years of the best reruns on television.