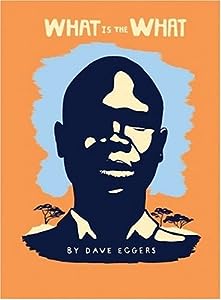 Yes, the title DOES make sense. Perhaps not blind, but the explanation comes relatively early in the book — and it’s what the whole of the book is about. The What is the unknown — the Dinka of Sudan have a creation myth where God gave them good land and cattle and offered them the choice where they could keep that, or they could have The What. He wouldn’t reveal what the What was, but the Dinka still had to decide. They went with what they could see. Then, it is said that God made the same offer to the Sudanese Arabs — who chose the What. This book is about Valentino Achak Deng and his attempt to discover what the What is.

Actually, while that’s the central theme, it’s not exactly the Magical Realism novel you might be expecting from that description. Valentino is one of the Lost Boys of Sudan. After Marial Bai, his village, was attacked by the Arabs from the north with the full approval of the Sudanese government, Valentino went on a grueling march to Ethiopia, in hopes of finding safety. And, for a while, he did — until there was a regime change, and he found himself attacked and forced out to Kenya, where he spent over a decade. Then, he went to America, in hopes of finding safety, which he did… again, for a while. The book opens with Valentino being robbed in his shared apartment in Atlanta. To keep himself going, he uses the technique that kept him sane during the walks — telling his story in his mind, addressing whoever is around.

It’s interesting how a book with so much pain, hurt, death and misery can actually end up being uplifting, but it is. Valentino’s problems aren’t ever over — aside from being robbed, beaten, bound and gagged, he also suffers from crippling migraines among other hardships that have afflicted him in the U.S. However, despite this, he knows how bad it can be — but it’s not merely this “well, it could be worse” sentiment that provides the upliftingness; that’s not a terribly uplifting thought. And it’s not quite his demeanor, which can be somewhat resigned and frustrated — but if anything, it’s his desire to make things better. Things are not how they should be — not even close, really — but he will do his best to make things better. He probably can’t make things how they should be either, but, he can do his best to make things better.