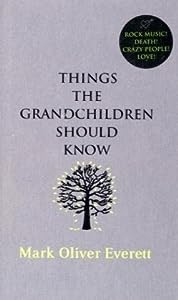 Cover of Things the Grandchildren Should Know

The blurb from Rolling Stone that appears in the front of my copy of Things The Grandchildren Should Know calls Mark Oliver Everett (a/k/a E, of EELS) “the Kurt Vonnegut of the rock world” — and that’s not the first time I’ve seen the comparison. Truthfully — I don’t quite see it — but then, it seems that just about anyone who writes lyrics that are literary gets saddled with that, so why should E be any different?

While I doubt you’d ever confuse their writing styles for each other, there is at least one thing E does have in common with Vonnegut: They both write a deeply rewarding book. (Vonnegut wrote more than one — hopefully E will as well.) E’s debut is a memoir, which is a good choice for a somewhat confessional songwriter. Particularly one with such an interesting life. It’s not everyone who saw a plane crash in their neighborhood for example. Or whose only moment of physical affection with his father came from hugging his corpse to check for signs of life. Or, for that matter, someone whose father is a brilliant physicist responsible for the very-far-ahead-of-its-time Many Worlds Theory. (As an aside, an outstanding television documentary from the BBC — aired in the states as an episode of Nova — Parallel Worlds, Parallel Lives follows E as he learns more about his father’s theory. The documentary, which I hope comes out on DVD soon, is both moving as E comes to understand his father more and enlightening as they give pretty straightforward explanations of some pretty heady science.)

album — either my favorite or second favorite EELS record, trading off with Souljacker

— recorded after his entire family died; his father in 1982, and his sister and mother in 1996, shortly after the recording of the first EELS record, Beautiful Freak

. The book gives a bit more insight into that era — and the character of his sister, with whom E was very close.

While most people who pick this book up will be EELS fans — though, really, that should be a greater number than there actually is, considering that EELS is one of the best, wittiest, most moving rock bands of our era — it’s not necessarily a pre-requisite. E’s story is compelling as a work of literature regardless of whether or not you’ve heard the records he talks about making (but, again, seriously, you really should hear them). If you’re a fan already, you need this book; if you’re not, you should still check it out – and then check out the albums. E’s a great talent, and it’s good to know that said talent isn’t just in one field. But, seriously, I don’t think any of us had any doubt of that.