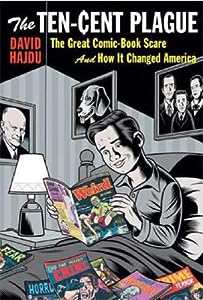 David Hadju’s new book is about the history of censorship of comics, from the initial appearance of newspaper strips to the creation of the Comics Code in 1954 (and the fallout coming shortly after). Looking at the original strips (and the pulp novels before that), the distrust of media designed for the public at large has always been around, though the comics seemed to get the brunt of that, both at the hands of local governments and other small-town tyrants burning books and, ultimately, themselves — as the Comics Code Authority was an organization founded by many of the publishers to self-regulate.

Hadju definitely has a point-of-view — one that I definitely agree with, mainly that censorship of any sort is an evil that should be avoided, and that said censorship is typically not the result of people honestly trying to do right, but trying to better themselves in the eyes of others. However, in some cases, his view can override more interesting stories — for example, he follows the standard line of Dr. Fredrick Wertham as a quack, where Seal Of Approval was clear to not merely smear him (nor whitewash him either); when people are revealed as the complex people they are, rather than a simple bogeyman, the narrative becomes richer.

Admittedly, Hadju doesn’t pull the complaints against the Werthams of the world out of thin air; for example, Wertham WAS a shameless self-promoter, one who tried to use his background as a psychiatrist both ways by claiming authority in his book Seduction of the Innocent without using any scientific methodology, and his tendency to be an ax-grinder rather than a true altruist. And it’s definitely interesting and commendable that Hadju tracked down people who participated in the small-town comics burnings to get their thoughts and feelings.

It’s clear that Hadju really has a knack for research as well, and went for a lot of people with perspectives that I hadn’t read before (and I’ve read a lot on this topic being a comics geek, and in particular, a Mad/EC Geek) — for those interested in comics (or the history of American attempts at censorship in general), this is definitely one of those books everyone should read and have in their library. It might not be perfect, but its positives far outweigh any negatives. And the Charles Burns cover art is pretty cool too.