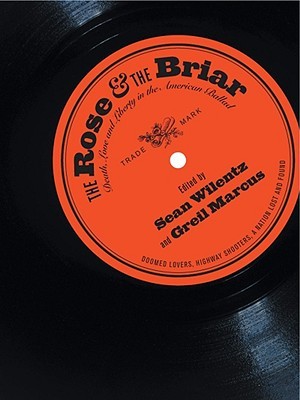 The Rose & The Briar is a collection of essays (and a couple stories) about the American Ballad — the folk story-songs that our grandparents grew up with, the first hit songs. Granted, the original instances of them being hits wasn’t on a record, but pieces of sheet music sold. (Remember — the music industry’s fear of new technologies isn’t a new phenomenon; the sheet-music industry was convinced that recorded music would kill their business. That’s why, up until relatively recently, sound recordings couldn’t be copyrighted, only transcribed music.)

Many of the songs mentioned in The Rose & The Briar are familiar still to modern audiences, via the folk and alt.country movements of the 1950s and ’60s, and 1990s respectively. Bob Dylan and Joan Baez show up quite often throughout the book as touchstones offered to the reader to refer to to jog memories of the songs. In fact, one of Dylan’s original songs, “Lily, Rosemary & The Jack Of Hearts” from Blood on the Tracks

is given a writeup — along with other modern-day balladeers like Randy Newman, Bruce Springsteen and Dolly Parton.

That’s one of the great things about this book — most of the writers write with such enthusiasm that you want to love the stuff as much as they do. For example, I adored the piece on “Nebraska” by Bruce Springsteen, despite the fact that Springsteen’s music tends to do nothing for me. Howard Hampton’s piece on the song and the history of the Charlie Starkweather case which inspired it made me wish I could get into The Boss — in fact, I wondered if there was something wrong with me that I couldn’t be affected by such an apparently stark-yet-still-somehow-moving song. The same goes with Steve Erickson’s paean to Randy Newman, a songwriter I tend to find too-clever-by-half and rather cloying. Though, admittedly, Nilsson Sings Newman

is pretty good, though not in terribly high rotation. (If you’re now expecting me to dis Dolly, you’ve got another think coming — I adore her. Even “I Will Always Love You” is an excellent, moving song — and that’s even after hearing the Whitney Houston mauling of it.)

As interesting as the essays on recent ballads are, the book really shines in the first and second sections about very early ballads up to the turn of the century (the book is ordered more-or-less chronologically — at least as well as can be, given the anonymity of the composers of the subjects). The best essay, by far, is Rennie Sparks’ deconstruction of “Pretty Polly”, one of the classic murder ballads. I am probably a bit pre-disposed to adoring this essay, since her book of short stories, Evil

is amazing, and her band, The Handsome Family is one of the all-time best alt.country acts — if not just plain country period. But her darkly whimsical style of writing is perfect for this sort of project, and betrays the shocking amount of research she did (her bibliography is included in the back of the book — and is easily the longest) — in a good way, of course; it’s not dry and clinical as you’d expect such a piece to be. It reads almost as if she just sat down and decided to write about a subject she really enjoyed armed with just trivia she happened to know. It’s an engaging, conversational approach that pays off hugely.

Sarah Vowell’s piece on “John Brown’s Body” and its evolution into “The Battle Hymn Of The Republic” is another standout as well, and could easily fit into any of her other books. She has a way of making history not only interesting (which it is anyway) but accessible and, well, fun. Or, at least as fun as something can be about one of the first American terrorists — admittedly, a terrorist on the right side — it’s hard to be down on someone who was so rabidly pro-emancipation, even if he did kill 5 pro-slavery settlers in front of their wives and children, and caused another 17 men to lose their lives in a riot. One admires his goal, but certainly not his horrific methods. Or, at least, the song’s sort of about that John Brown… but I’ll not spoil it here, instead encouraging you to let Vowell explain it; she’ll do a much better job than I could.

Not every piece works as well — many of the ones that take a more fiction-based route aren’t nearly as interesting as the straight-forward essays. Anna Domino’s piece on “Omie Wise” written from the real-life subject Naomi Wise’s point of view falls flat, a pity as it’s an interesting story. Likewise does Jon Langford’s beautiful-but-unenlightening “The Cuckoo”, presenting the lyrics on one page with some of his (amazing) artwork opposite. Of course, his piece isn’t INTENDED to be an historical work, so criticizing it for that seems a bit like scolding a dog for not purring when you pet it. Sharyn McCrumb’s piece on “Pretty Peggy-O” is interesting, but more in a sense of neat trivia being imparted about the original meanings of songs like “Pop Goes The Weasel”, but it doesn’t seem to have much weight, though the conceit of actors hired to act out ballads and attempting to exercise their will on the singer is clever. The one exception to the more literary attempts is Joyce Carol Oates’ piece on “Little Maggie”. It is outstanding, finding the perfect balance between fiction, truth on the history of the song and universal truth of fame, relationships and the human condition.

If you’ve got an interest in music of any sort, but particularly country and early popular music, this book is definitely worth checking out. If you’re already an expert, you probably won’t be too enlightened, though the layman will find it terribly engaging. Well, at least I did, and about the closest I can get to being called an expert is that I’ve got the Ghost World