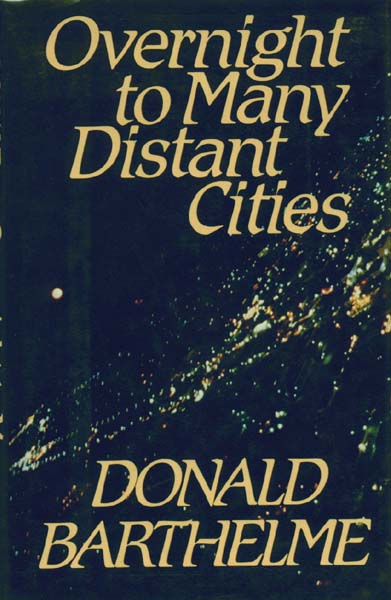 For a long time, I’d been somewhat interested in checking out Donald Barthelme‘s work. I’d heard him referenced near and by some of my favorite authors — most recently, an issue of McSweeney’s was half-devoted to him. Recently, in a used bookstore, I stumbled across a few Barthelme books on the “we recommend!” shelf — if I recall, it was this, Sixty Stories

and one other that completely escapes me, but I don’t think it was Forty Stories

(though it may have been — but I know that reprints some of the stories in this volume, and I remembered checking the table of contents against all three books to make sure that whichever one I chose would have been worth it and not, like, wholly reprinted in something I’d buy later if I liked it). I believe, too, that this was the cheapest of the three and given that — and the relative slimness of the volume — it was probably a pretty good entry point. Not too expensive (and on sale to boot), but not too long (either leaving me wanting more nor being a long, terrible slog, depending on what I thought of the author’s work).

Luckily — and I should have guessed this — it turned out it was the “wanting more” side of the coin. Even though it took like 24 issues for McSweeney’s to get around to celebrating him (NB: I haven’t read this issue yet — and I’m not sure if it’s intended for the neophyte, as a lot of it is essays about Barthelme, along with some rare previously unprinted stuff — typically more for the already-converted fan), Barthelme has been there since the beginning. His style is VERY much in that vein — in fact, he’s one of the founders of that type of fiction, and unlike some stylistic founders, his stuff is still very readable/enjoyable, not having been eclipsed by later influencees, which can happen, sadly, very often. (Though I am reading Gravity’s Rainbow

right now, and about 30 pages in, I am enjoying it (at least in an initially hard-to-follow-way) for the sheer beauty of the language, but I mention this in reference to reading my first Pynchon, The Crying of Lot 49

which I also enjoyed but did suffer quite a lot from the I-Know-This-Guy-Invented-It-But-Other-People-Later-Did-It-Better Syndrome.)

One other good thing about having decided to pick this volume up rather than the others is that — aside from the gorgeous title and lovely cover design — not ALL of the stories are reprinted in the aforementioned Forty Stories (nor any other volume as it turns out), in particular the flash-fiction-type of interstitial pieces between longer stories, each without titles. Those included some of my favorite pieces, including “Financially, The Paper….”, which, honestly, I’m surprised hasn’t been reprinted — although given the problems with the Newspaper Industry as I write this, is probably overdue for such a re-printing, perhaps in a magazine or something. (If I had money, I would contact the Barthelme estate to see if I could republish it here, however that would be kind of silly, as it’d probably be quite expensive.)

The collage-esque style is apparent but engaging; it’s a literary example of the Kuleshov Experiment, and is basically interesting both on a intellectual level, enjoying the play of the story, as well as an emotional level, as we are sucked in by the soup/girl/coffin as we’re never immune to those sorts of effects given the human brain’s love of patterns.

One can see future-echoes in works by folks like David Foster Wallace — a sense of emotional depth as well as linguistic play. While none of the stories in this volume have quite the resonance of, say, “Forever Overhead

“, my own personal favorite short story ever in the world ever, it’s not unheard of to me for Barthleme to be able to come close — even in his satirical forms, like “Captain Blood”, a story about a pirate captain who’s actually a pretty good guy as pirates go — likeable not even in a bad-boy-dangerous-pirate sort of sense like, say, Jack Sparrow from the recent Pirates of the Carribean

I am looking forward to reading more Barthelme, and in particular that issue of McSweeney’s, now that I at least have a BIT of context as to what makes Barthelme so great other than that cool people seem to dig him.